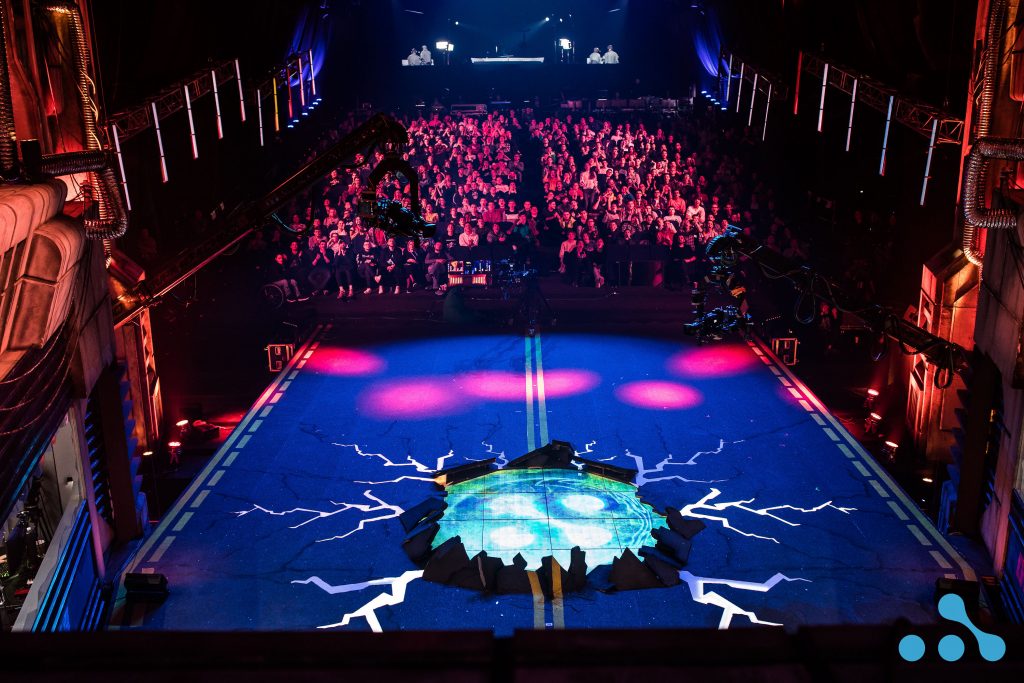 The penultimate day in Kyiv, Ukraine, wrapped up with a pair of losses for CIS teams.

Day four of WePlay! Dota 2 Tug of War: Mad Moon is in the books, and after a trio of crucial playoff matches, we now know our final three teams. Lower bracket heroes Nigma join Virtus.pro and Team Secret in a battle for the final podium spots, and a day of intense games.

But even before the action kicked off, we were once again treated to the spectacular production value of WePlay!’s event. The cyberpunk theme was in full effect with another set of futuristic outfits on the presenters, slick neon cityscape backdrops, and a suitably heavy futuristic EDM soundtrack. WePlay!’s production has been on-point throughout the entire event so far, and expectations are high for them to surpass themselves tomorrow for the grand finals, especially if they keep up the Blade Runner references.

As the games kicked off though, the sci-fi stylings and neon lights were not enough to save Aggressive Mode from the wrath of Nigma. Following their heartbreaking loss to Team Secret, in what was the anticipated return of the Kuroky versus Puppey rivalry match, Nigma understandably had a chip on the shoulder. They were the clear favorites headed into the day’s opening match, and even before the start of the first game, there was a clear gap between these teams. Nigma’s draft seemed purposeful and thought out whereas Aggressive Mode instead relied on a comfort pick Rikki who had no syngery with their others drafted heroes.

A shaky start from captain Kuroky on Keeper of the Light gave Aggressive Mode a small chance of victory. But ultimately, the difference between these two teams became readily apparent. Nigma capitalized on their opponent’s mistakes which eventually lead to them wrapping up the match with an easy Roshan take.

In the second match, Nigma drafted into some new heroes that they normally would avoid during drafts. They instead experimented by picking Skywrath Mage and Shadow Shaman. Meanwhile, their opponents seemed set on attempting to counter picking Nigma’s draft. However, this ultimately didn’t matter as Nigma found themselves in the bizarre position of having Kuroky play mid and Miracle on an off-lane/support role. The mix up of roles eventually backfired for Nigma, and Aggressive Mode picked up a gift of a win.

But while Nigma had gone easy on their opponents with that bizarre draft and positional switch up, Aggressive Mode wouldn’t be so fortunate in the final game. Nigma all but dominated with their traditional no-nonsense picks and executed flawlessly. Aggressive Mode had no answers to one of Europe’s top teams playing at the highest level, instead heading home in 5-6th place with $12,000 in prize money.

This win let Nigma to advance to another lower bracket battle for survival versus Gambit Esports. Gambit was riding high after having demolished Dendi’s upstart B8 team in their elimination match the previous day. However, looming over the team was the overall turmoil of the CIS region, which has affected Gambit in several ways. Nigma had every advantage heading into this game, momentum, focus, and overall talent.

Two quick kills for Nigma in the opening seconds of the game would set the tone for this short series. A pair of thirty-minute games showcased the definitive second-tier level of Gambit. Against the top teams, they’ve consistently fallen short this tournament, and this matchup was no different. With Nigma’s tried and tested Lifestealer in the first game, and Naga Siren in the second, the team was quickly able to advance to the lower bracket finals. Gambit crashes out of the tournament, taking home a respectable $20,000 after a fourth-place finish.

Big names in the big game

With the lower bracket wrapped up for the day, there was just one thing left to decide, and that was the Winner’s Bracket champs. Team Secret and Virtus.pro had both gotten to this point by steamrolling the competition. Between the two of them, they’d dropped just two games the entire tournament.

We expected an epic clash from these two and that’s what we got. In a nail-biting first game, Team Secret’s hard engaging and mean area of effect composition narrowly edged out a win versus VP’s harder carrying lineup. Throughout the match, it was a back and forth affair, with plenty of deaths on all sides. But ultimately, it was Secret’s Ludwig “zai” Wåhlberg on his Mars that would take control of the game and secure the win.

Sadly, in a match that seemed destined to go to three games at WePlay! Mad Moon, the characteristically decisive plays of Clement “Puppey” Ivanov and his team secured Secret a trip to the finals. For game two, we saw the same back and forth action, but again with Virtus.pro narrowly missing out. Zai’s consistency on Zeus, this time racking up a host of assists, and their opponent’s lack of answers lead to the 43-minute victory.

WePlay! Dota 2 Tug of War: Mad Moon will return tomorrow for the Lower Bracket Final and Grand Finals. You can catch all the action on WePlay! ‘s official Twitch channel.