Mikyx: “Usually, It Is The Greed That Gets To Us” 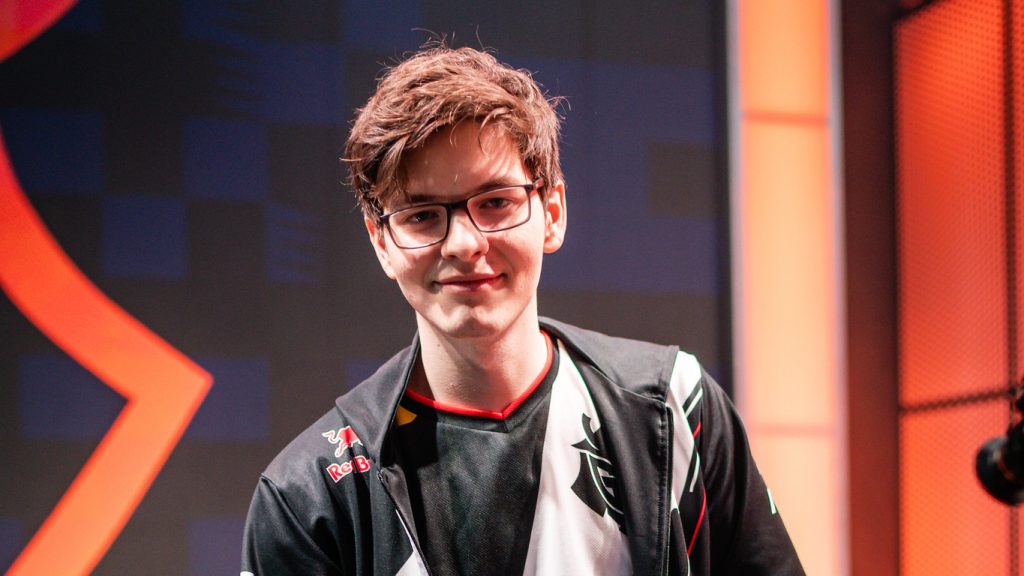 G2 now has to fight through the lower bracket in the LEC Playoffs. (Photo courtesy Michal Konkol for Riot Games)

For a total of 875 days, G2 Esports was undefeated against Fnatic in a ‘best-of’ series. Sure, during the regular split they may have gone down, but when the stakes were high, G2 came out on top for multiple years. Until this weekend. In the upper bracket semifinals of the LEC’s Summer Split Playoffs, Fnatic trumped G2 in a nailbiter of a series. In a split where both teams had to fight to even make it to the top four in the regular competition, they reminded the viewer once more why they, no matter what, are never underestimated.

Though he lost the series and was sent to the lower bracket, G2 support Mihael “Mikyx” Mehle took the time for an interview. He walked us through the hectic series that constantly went back and forth, shedding light on G2’s pick/ban strategy, and the lessons he learned from the defeat.

Hotspawn: Thank you so much for joining, Mikyx. This was a wild series, but before we talk about the games I want to know how you prepared for G2’s longstanding rivals: Fnatic.

Mikyx: We watched the series they played against Rogue, and from there we decided how we wanted to prepare against their farming style junglers. They were playing the Evelynn, the Hecarim, stuff like that. In the end, we decided to just ban Evelynn and try to play against Hecarim. But obviously, during the series we decided to ban Hecarim as well. I think we learned more about how to play against it now. I think we should have a better idea of how to play against it next week. For the bot lane, many teams just have the trade between Ashe and Senna, with some Jhin in there sometimes. There is a lot of priority for the Nautilus too in the current, which we didn’t think they would follow. But they did, so during the series we also decided to ban it. Overall, there wasn’t really a lot of special preparation, apart from the farming jungler.

Sometimes you just say to each other: “I’m so fucking useless this game man.”…And then you go to the next game

Hotspawn: There is a lot to talk about when it comes to this series. Let’s just start with the first game: the draft didn’t go your way. What was the idea behind it?

Mikyx: So, we went for the first-pick Senna. Then they went for the Nautilus and Ashe, which we followed with Braum and Lillia. I guess the Braum was the first mistake. We thought that we would be just fine playing Braum against anything, as it is a decent lane matchup against Nautilus and Ashe. But I ended up being really useless against their Hecarim. Also, they had an Orianna in the mid lane. In that game, I was not really a champion. We didn’t really have any champions to engage with either. We tried to fix that for the next game, and it worked a bit better in game two.

Hotspawn: When a draft doesn’t go your way, how do you then adjust in-game? How do you communicate about making pivots?

Mikyx: We don’t really say anything about the draft during the game. We do that more after the game. During the game, we just try to win with the hand that we’re dealt, I guess. Even if it sucks. *laughs* Sometimes you just say to each other: “I’m so fucking useless this game man.” “Yup, same dude.” And then you go to the next game, try to improve on the mistakes you made.

Hotspawn: The second game did go much better. You now banned the Ashe and shifted over to a Leona/Senna combination. Were you sure about how to draft from this game on?

Usually, it is the greed that gets to us

Hotspawn: Game two seemed to be so much more in your favor. Actually, up until game five, all the games felt either super comfortable for one team, or for the other. Did it feel the same to you?

Mikyx: I mean, I felt that after game two we would probably just win the series. And then in the third game, well, we were winning. We were about ten thousand gold ahead or something like that. And then… *laughs* I guess we just wanted to kill their Ornn after we had destroyed their inhibitor. We all died, and it went downhill really far from there on. It turns out that Hecarim and Ornn were unkillable. So that game was lost, even though it should have been a free win. We should’ve just gone back to the base and then go for Baron Nashor.

Hotspawn: So, what exactly happened in that top lane? Were you guys just too confident?

Mikyx: You could say that, yeah. We were trying to do too much there. We were just greedy, I guess. Usually, it is the greed that gets to us. So as I said, if we just get the inhibitor, go back to the base, get the fourth drake and then the Nash, the game is probably over. But we saw Ornn, and we were like “What is he doing here?” because he was trying to clear the Rift Herald. Then we all died because we went onto him, and his teammates had returned to the base. It was honestly… just a shame. *laughs*

Hotspawn: You’ve played and lost in important games before. Are you just immune now to these losses? Is it easy to shrug off when a game gets thrown?

Mikyx: I think so. We just realize that we probably should have won that game. It’s fine. I think we played better than in the game before it, so the next game should be better from us as well. Even though we threw this one, we will not throw the next one. That’s kind of how I feel about it.

Hotspawn: The fourth game felt the most unbalanced, I would say. Fnatic got some things done in the early game, but after that, you absolutely stomped them.

Mikyx: Game four was honestly all a draft difference. As soon as we picked Taric and they picked Kassadin, the game was won, unless we fall ten thousand gold behind in ten minutes. They want to go in with Camille and Hecarim, but they’ll never kill anyone. When they go in, I just press to activate my ultimate and all their damage gets nullified. So that was a big win for us, and it was pretty free.

We should just not get overconfident when we’re winning, even though it’s hard to do.

Hotspawn: You’re then going into a fifth game with a spot to the Summer Split finals directly on the line. During the early stages of the game, it felt like both teams were a bit hesitant, a bit scared to engage in fights. Were you indeed trying to play more reserved?

Mikyx: I’m not actually sure. I think we were pretty confident, after winning game four, that we could probably win game five as well. We had some mistakes in the draft this time. I think that I should probably not have picked Braum there, but hey. That was kind of useless. After going into the game, I thought that it would maybe be a rough one for me. But maybe Lucian would shoot all his spells into me, and then we could win the fights. Even in the game though, because we had the Sett and LeBlanc combination that worked well for us in game two, I thought that those champions would carry us. The mid/jungle duo would do the work, we would chill in the bot lane, and then in team fights I would start being useful. We misplayed a lot of fights. In general, I think, we misplayed a lot in that game. It was still winnable.

Hotspawn: After you lost a fight in the top lane, mayhem broke loose. At one point, it looked like Fnatic would end the game through the bot lane, but Jankos came through with a heroic save while the rest of you were waiting to respawn. How was that moment from your side?

Hotspawn: When the game is still going, do you allow yourself to get ecstatic? For some players, it may give them a boost, but with others, it may get into their head a bit too much.

Mikyx: Sometimes we get too excited. After we won the fight in the mid lane and were trying to end the game instead of getting the Nash. But yeah, it happens. When it is game five and it’s really hyped, it’s a close game, then usually you get a bit too excited.

Hotspawn: Looking at the series as a whole, what have you learned from this loss that you can implement against your potential next series in the grand finals of the Summer Split?

Mikyx: I think it is mostly about the draft, and how to draft around their picks. Maybe we should try to go on the red side a bit more as well. We played five games on the blue side today, and we should try to experiment a bit more with the red side. I also learned that Taric is pretty good against Hecarim. *laughs* We should just not get overconfident when we’re winning, even though it’s hard to do. But then we should be fine.

Hotspawn: On the broadcast, it was mentioned that Fnatic picked red side because G2 has many counterpicks available to close out the draft with. But why did you guys stick to picking the blue side?

Mikyx: I think we mostly played on the blue side so we could get our draft for the bot lane. Also, on the red side you’re kind of forced to ban Caitlyn and Kalista. But honestly, we were fine with both sides. It felt like we just pick the blue side again, tweak a few of the bans and picks, change it up a little bit maybe, and then we should be fine.

Hotspawn: You play again next week Saturday, against either Rogue or MAD Lions. Who do you expect to face there?

Mikyx: I expect to play against MAD Lions. I think they are a lot better than Rogue is. Our game against MAD Lions is probably going to be a close one. They’re a good team, so we should have a close series with them. I mean, hopefully it doesn’t go to five games like it did today. It was a bit too long. 3-1 is fine. I’ll take a 3-1. Then we’ll face Fnatic again, and this time we’ll be a bit better prepared. It should be a quick 3-0, and then they can go to sleep.

The next match in the LEC Summer Split Playoffs is between MAD Lions and Rogue, and will be played on Sunday, August 30th, at 5 p.m. CEST.