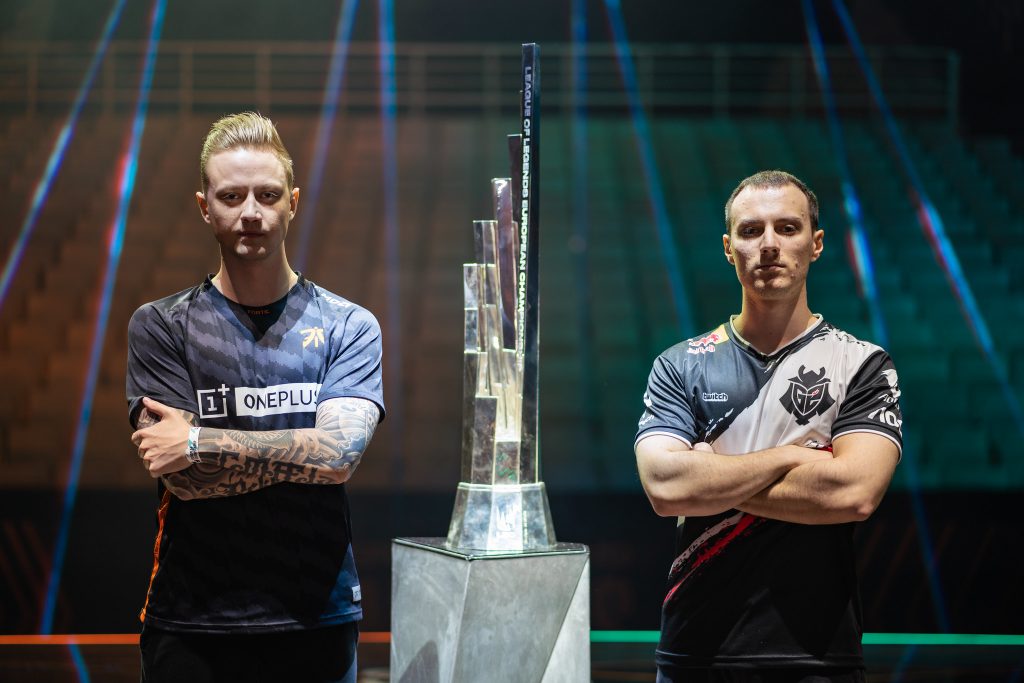 Round one of the LEC playoffs made one thing clear: Europe is still a battle between G2 and Fnatic. (Photo via Riot Games)

The League of Legends European Championship (LEC) Summer playoffs have begun. G2 Esports and Fnatic showed why they are so good in the playoffs in their round one wins, while FC Schalke 04 kept up their late season momentum to move onto round two. We take a look at where things stand in the LEC by looking at the top storylines so far in Europe.

IN THE END, IT’S ALWAYS G2 ESPORTS AND FNATIC

G2 Esports and Fnatic entered the playoffs with major question marks. G2 Esports had their worst split since 2017 Spring, going just 11-7 in the regular season. This also comes after they finished the season on a six-game winning streak. While Rasmus “Caps” Borregaard Winther slotted back into mid naturally, Luka “Perkz” Perković struggled to go back to ADC. Really, the whole team aside from Caps looked worse this split.

But, as bad as it was for G2, it was much worse for Fnatic. The perennial contenders did not clinch a postseason berth until the final day of the regular season. Fnatic barely scraped to a 9-9 record, but they somehow looked even worse by the eye test. Fnatic’s wins were sloppy and the result of some wild throws by the opposing teams, even if Fnatic did well enough to capitalize. Like Caps on G2, Martin “Rekkles” Larsson was the only consistent performer on Fnatic.

Fortunately for G2 and Fnatic, their championship points totals still landed them in the upper bracket of the LEC. With only six playoff teams and four World Championship berths, both teams needed to only win one series to clinch their spot. With G2 Esports’ 3-1 win over the MAD Lions and Fnatic’s 3-0 win over Rogue, the LEC’s two premier organizations will once again represent Europe at Worlds.

G2 got off to a fast start against the MAD Lions, winning the first two games. Caps carried game one as expected, going 9/0/11 on Leblanc. In a good omer for G2, Perkz had a great game two performance, going 6/2/10 on Senna. However, the MAD Lions would not go down easily. They stomped game three 20 kills to 5 in 29 minutes, tearing Marcin “Jankos” Jankowski’s Lee Sin (1/8/3) apart. G2 closed out the series a game later, winning a quick 26-minute game despite only leading 10 kills to 8. Caps was named player of the series after going 19/10/28 on four different champions.

Fnatic had an even easier time in their matchup versus Rogue. They opened with a quick 26-minute win in game one, leading in gold from start to finish. The final two games in the sweep were quite a bit closer in kills (14 to 11 and 17 to 16), but the results were the same. Rogue’s top side of the map was exposed in the series, giving Fnatic their early advantages to snowball. Oskar “Selfmade” Boderek broke out the Evelynn pick twice, earning series MVP for going 14/6/20 across the three wins.

So, no matter how well Rogue and the MAD Lions played during the regular season, G2 Esports and Fnatic still reign supreme in the playoffs. The two rivals will now meet in the semifinals, where the winner will advance to the Finals. No matter what happens going forward, G2 and Fnatic have both already qualified for the Main Event of the World Championship. However, the seeding is still important. It’s much easier to advance from the group stage if you’re playing against the second and third best teams from the opposing regions. They probably wouldn’t mind winning the LEC title, either.

The rematch of the Spring Finals will take place on Saturday, August 29 at 8 a.m. PST.

FC Schalke 04’s qualification for the playoffs was the story of the Summer Split. The worst team in the league (at the time) goes on a huge run, ripping off seven straight wins at the end of the season to scrape their way into the playoffs as the final team. Even if they went one-and-done in the playoffs, that run would be etched in history. However, S04 weren’t content with just making it into the playoffs. They made a statement in their opening match by sweeping SK Gaming 3-0.

With a 3-0 sweep in the first round of the #LEC playoffs we continue our #S04MiracleRun to Worlds!#S04WIN pic.twitter.com/DZgSj3Ct7X

Of the three LEC playoff matches so far, this was the least competitive. FC Schalke 04 set the pace from the beginning, winning game one in only 25 minutes while up 12 kills to 2. SK lasted 37 minutes in game two, but S04 were in control from the moment they secured the first Ocean Drake at 12 minutes. Game three was evenly played through 22 minutes, but S04 hit the gas pedal. Schalke picked up a five-for-one ace and Baron, infusing them with a 4.5k gold lead. They wasted no time in securing turrets and inhibitors to grow their lead, eventually ending up 16 kills to 8 in 31 minutes.

Felix “Abbedagge” Braun continued his stellar play, going 17/2/16 in the three games. Erberk “Gilius” Demir also continued his confidence into the playoffs, going 10/2/15 in the series. The confidence level of those two players will be crucial to S04’s continued success. We’ve seen their struggles when it isn’t there, but their success in the past month has written a new narrative in their careers. Their lows may be low, but their highs are good enough to dominate Europe.

Still, S04 has more work to do. Their weak regular season has left them in the lower bracket, so any series could be their last. They also need to keep winning to earn a berth to the World Championship, as both Rogue and the MAD Lions are still ahead of them in the bracket. But, with one series win over the MAD Lions, S04 would qualify for the World Championship. Not bad for a team that started the Summer Split 0-8.

One team’s Cinderella story is another team’s disappointment. While FC Schalke 04 continue their surge, SK Gaming have had their 2020 year ended. As happy as SK Gaming were to make the playoffs, they were dealt a rough hand in having to face S04 in the lower bracket. Fnatic’s tiebreaker over SK moved them up to the upper bracket.

We lose 0-3 to @S04Esports and this marks the end of our 2020 #LEC season. We exceeded expectations but we could have done more and that's what we will aim to do in 2021.

A big thank you to the SK Fam who supported us through thick and thin this year, we appreciate you all! pic.twitter.com/lNbh4N8tDg

Still, SK Gaming should be very happy with their improvement from Spring to Summer. After going just 4-14, good for ninth place, SK made a five game improvement and climbed to fifth in the standings. Janik “Jenax” Bartels made a successful transition from mid lane to top, and though Dirk “ZaZee” Mallner struggled against Abbedagge, he still showed plenty of promise in his first season.

The first order of business for SK Gaming this off-season, though, will be to retain ADC Juš “Crownshot” Marušič. Though Crownshot had his own share of blunders late in games, he was the most important carry on an improving team. It would also make sense for SK Gaming to retain Dino “LIMIT” Tot to continue alongside Crownshot, assuming a more attractive option doesn’t come available. The two have shown good chemistry.

Jenax’s successful role swap and limited time as a top laner means that there could be even more room to grow. SK Gaming might look for a more seasoned top laner in free agency, but Jenax could return. ZaZee remains under contract through 2022, while Kim “Trick” Gang-yun is signed through the end of 2021. SK Gaming have some decisions to make, but they’re starting from a good position.

The LEC playoffs will continue into round two with five teams left in contention. FC Schalke 04 opens the action in round two against the MAD Lions on Friday, August 28th at 9 a.m. PST. Fnatic and G2 Esports will then play the semifinal match the next day, this time at 8 a.m. PST. The weekend will end with Rogue taking on the winner between the MAD Lions and FC Schalke 04 on the 30 at 8 a.m. PST.