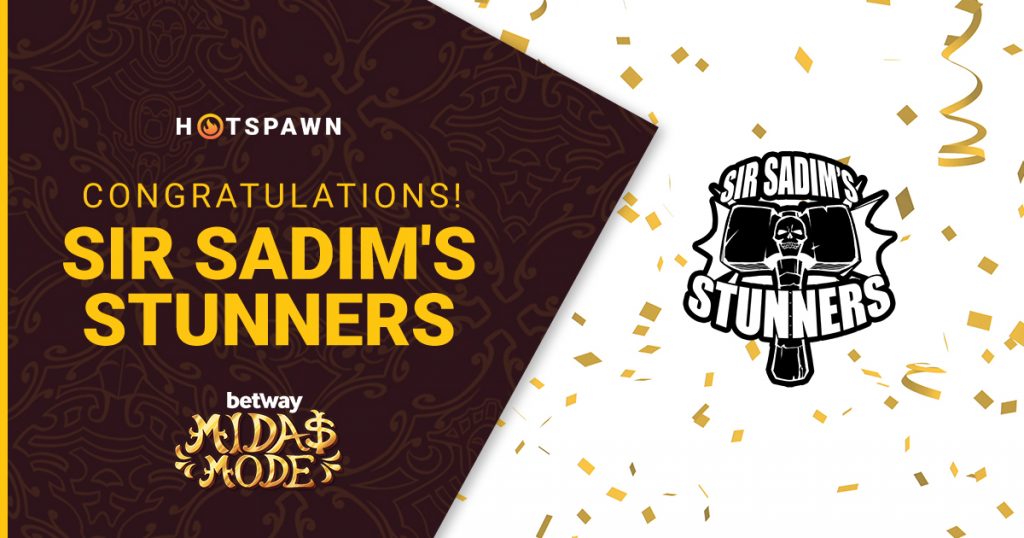 BETWAY Midas Mode 2.0’s European portion has come to an end. After five incredible days of games, we were left with just two teams: the dastardly mercenary streamer team of Sir Sadim’s Stunners and the legendary The International 2013-winning Alliance stack. This clash of titans couldn’t have been more hype, especially with the Midas Mode map and skins in full effect. And, of course, the finals were further enhanced with a host of extra bounties for the day. Sir Sadim’s Stunners’ took home the first-place finish, and US$22,000 in prize money.

As the first game’s draft started, Alliance picked the Doom and Zeus, as well as a slightly questionable Tinker pick for Rasmus “Chessie” Blomdin in mid. The Stunners, having dominated Natus Vincere in yesterday’s series, were nerfed slightly with a reduced Moonbuck count. With this slight handicap, they picked up Tusk, Juggernaut and Templar Assassin. And to further enhance their draft, Alliance bought evil creeps to attempt to dismantle Sadim’s Stunners.

Janne “Gorgc” Stefanovski and Troels Lyngholt “syndereN” Nielsen started the game by crushing bot lane, with the Jugg/Lich combo. And as the Stunner’s lanes continued to dominate, Synderen felt confident enough to gloat in all-chat.

Sir Sadim's Stunners are ahead by a long way…

…but that still doesn't mean you can take on VR Roshan @Gorgc! 😆 pic.twitter.com/RBxgS9GiMi

At the 14-minute mark, the evil creeps took the map and began acting against Sadim’s Stunners. The audience-controlled minions immediately set about denying runes and causing havoc, but it was all for naught. With the Stunners’ comfort on heroes such as Niklas “Wagamama” Högström’s Templar Assassin, the effect of the lead was even more pronounced. What’s more, the Alliance stack’s draft just wasn’t good for coming back from a deficit.

However, as the match progressed, the Stunners weren’t capitalizing on their advantage. Alliance started to build up more items, and their heroes began to do more damage, eventually to the point where they could catch out and kill the Stunners. Unfortunately though, after an attempted catch in the river, Alliance’s last hope disappeared.

Pushing into the high ground, Synderen and the Stunners were able to quickly kill the opposing structures, with Sir Sadim’s Stunners picking up the win in a somewhat one-sided game filled with all-chat flaming.

For game two, Alliance splashed out on the tournament first Tidehunter, while Stunners most costly hero was the second pick Lion. Twitch Chat, ensured the Templar Assassin was banned, along with Broodmother, in an attempt to prevent snowballing heroes from taking over the game.

Despite some connection and technical issues starting in the game, both teams began the match cautiously, not making big moves in lane, instead playing a much safer, farm-heavy style. And again, like the first match, both teams were happy to engage in some all-chat communication, baiting and taunting each other throughout the early phases of the game.

The streamer team of Sadim’s Stunners seemed to be the more hard-skinned of the two squads, taking the flame in stride, and striding to a substantial 20k gold lead by 25 minutes. Nothing the Alliance-TI3 roster seemed to do could stop the Stunners, and even the addition of creeps for both sides. The Stunners had even resorted to paying their creeps to stack jungle camps, giving them an impressive amount of farm.

With all these advantages, it was only a matter of time before the Alliance stack lost the game, and at 31 minutes, the Stunners pushed in and finished off the Radiant base.

This 2-0 streak left the TI3 Alliance stack with their backs against the wall, and one last chance to prove their worth. And to help them, Mr. Midas granted Henrik “AdmiralBulldog” Ahnberg any of his signature champions for free in the next draft. As picks started though, Alliance politely declined the offer of help, instead wanted to win on their abilities. The team opted to pick a Wraith King, Dazzle, Beastmaster combo, while Stunners again went for the Lich, combining it with the Lina and Naga Siren.

As the game started, Henrik “AdmiralBulldog” Ahnberg on Beastmaster took a 1v2 lane top, while Alliance tri-laned bot. But unfortunately, in what was the start of a series of bad mistakes, the TI3 found themselves giving up kills bot lane.

By ten minutes, things were in a dire state for the Dire side. Alliance was 11 kills behind, and AdmiralBulldog could no longer step foot in the top lane. The advantage was clearly in the hands of Sir Sadim’s Stunners, and there were only a few ways they could get back into the game. And one of those ways was to get very tanky and wait till late game.

Sir Sadim's Stunners are only a few more fights away from becoming CHAMPIONS! 🏆 pic.twitter.com/R2rxwya2Dg

With their bulking regimen in place, Alliance again tried to farm till late. But sadly it was all for nothing. Alliance would catch the occasional kill across the map, especially as Synd’s stack attempted to push in and take structures. But really, it was only a token opposition against another 10k plus gold lead from the Stunners. Alliance fell 0-3 against Sir Sadim’s Stunners, a disappointing defeat.

Having defeated all the opposing teams, Sir Sadim took to the panel to gloat over his defeated brother, Mr. Midas. The Stunners were not the highest-rated team headed into the tournament, and even though Midas Mode isn’t the most serious of affairs, winning is no easy feat. Congratulations to the EU Midas Mode champions!