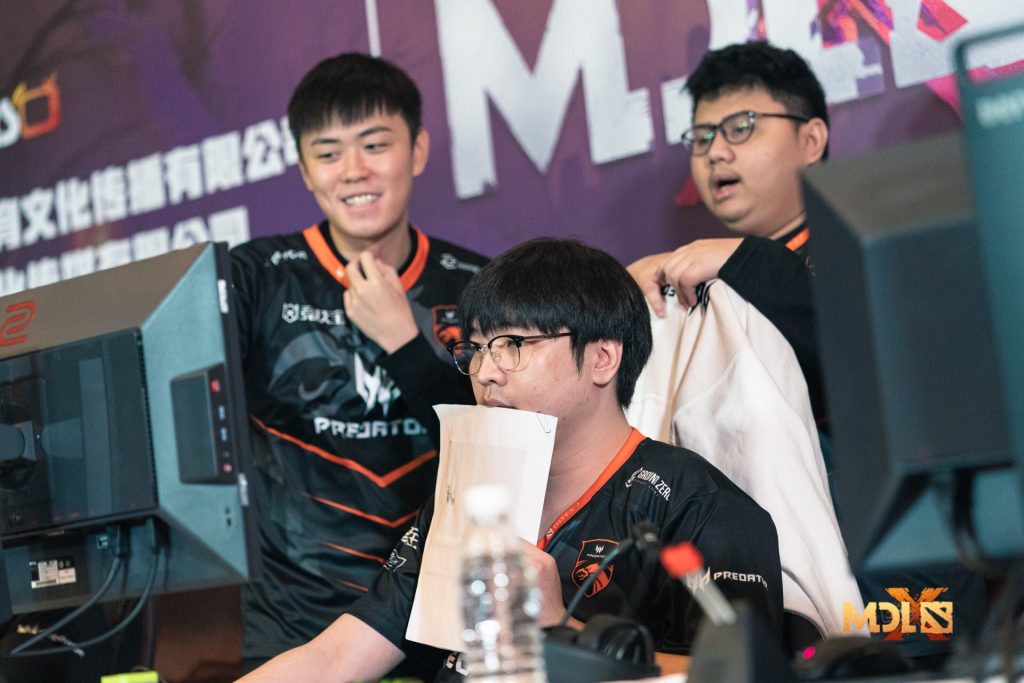 Today was the last day of matches at the MDL Chengdu Major before we take a short break until Friday. But even with a well-deserved rest on the horizon, the remaining teams in the tournament weren’t letting up. Once again, we saw some highly impressive performances from teams we’ll no doubt be seeing in the finals, with beastcoast and Invictus Gaming stepping up and proving their worth. But before that, it was time for another episode of Good Morning Purge!

Calling all Archon players! @PurgeGamers has a heartfelt message for you: pic.twitter.com/TzEgoWD4jb

In a change of pace from our previous two days, we kicked off Wednesday with some Lower Bracket action. First Fnatic took on Invictus Gaming, and then Fighting PandaS faced off against beastcoast, with the losers heading home.

As the first series started, it looked like we’d be saying goodbye to yet another Chinese team. The region had a disastrous day yesterday on home soil, with Team Aster and EHOME eliminated. And as Fnatic locked in Gyrocopter, and breezed past iG in one of the quickest matches of the tournament, it looked like another bad day for China was on the horizon.

But for game two, iG came to life. Sticking with the Kunkka pick which had (pardon the pun) anchored them in the first game, iG was able to pull off two impressive wins. With Zhou “Emo” Yi popping-off on Ember Spirit in game two, and Storm Spirit in game three, there was little Fnatic could do, as the team crashed out of the tournament. A heartbreaking loss considering how well they’d against iG in the first game.

With our victory against Fnatic today, we will continue our #MDLChengdu major journey Friday 22nd on stage.

We will continue improving from our mistake and keep on fighting!

In our next matchup, beastcoast took on Fighting PandaS in a battle of fan favorites. The last time these teams met was at Midas Mode 2, where both stacks fell short of a win, but still took home second and third place respectively. On this, a far more important stage, the results were similar. At Midas Mode, beastcoast, then known as Team Anvorgesa, had quickly defeated the Fighting PepegaS. And this matchup was no different.

Except perhaps just how good Hector Antonio “K1” Rodriguez has gotten at farming. In both games, Hector dwarfed his opponent’s last hits and total gold. On Alchemist, he leveraged this into a 26-minute stomp. In game two on Wraith King, he wasn’t so quick, but still finished things up in under 40 minutes, with over 500cs, and an insane 802 gold-per-minute. K1 is one of the big reasons this beastcoast team is so potent, and in their game against iG on Friday, he’ll have to turn up in a big way. The PandaS, on the other hand, are headed home after losing this elimination series.

The South American scene was neglected for a very long time, but @beastcoast are showing the world they belong to the top.

Chris Luck and his teammates secure a convincing 2-0 victory over Fighting PandaS.

Upper Bracket: And then there were two…

Stepping back from the Lower Bracket and into the upper tier, we were treated to two incredibly impressive performances. The first one came from TNC Predator, who proved that slow and steady wins the race, especially if you’re almost perfect in your execution. A 70-minute slog that was game one vs J.Storm came out in TNC’s favor, partly thanks to being able to limit misplays.

In the second game, J.Storm’s cores managed to get far more going early game. They stayed even with TNC, picking up a lot of opportunistic kills. But great individual play by TNC’s players secured multiple victories across the map. Timothy John “Tims” Randrup even started 1v5ing at one point on Disruptor, destroying any lead J.Storm had left. Ultimately, these outplays would lead to J.Storm’s loss and their trip to the lower bracket.

It’s incredible how clean TNC looks. Apart from a few questionable catches early, and a single moment when Armel Paul “Armel” Tabios was caught out, there were virtually no mistakes from the SEA team. J.Storm’s Chaos Knight was unable to do anything against the combo of Disruptor and Kim “Gabbi” Villafuerte’s Naga Siren. The squad overall look unstoppable. They’ve dropped a single match this entire tournament, and are likely on course for a trip to the finals.

The final series of the day pitted Vici Gaming against Evil Geniuses. And this time, it was VG’s turn to impress. The top-performing Chinese team in the tournament wasn’t about to lose to an upstart NA side that’s only showed limited signs of life this entire event. At times, this first game felt like we were watching a match from last season, with Zeng “Ori” Jiaoyang’s Gyrocopter rotating for kills whenever possible. Using these early 2019-style strategies, VG was able to grab a decisive lead, with EG tapping out after 41 minutes.

Game 1 goes against us after the push becomes too much for our farm-heavy lineup.

We're ready to rally in Game 2, give us your energy!https://t.co/NOmjSuGy9S

For game two, EG tried out something a little different, picking Pudge for Roman “RAMZES666” Kushnarev. But as the match started, it was Zhou “Yang” Haiyang’s Venomancer that proved to be the more potent pick, propelling VG to an early lead. As the game progressed, EG effectively stalled the game, attempting to build up their Ember Spirit and the rest of their cores. And their perseverance worked out. After a crucial pair of fights at the 50-minute mark, EG pushed down the mid lane, taking tier fours and finishing the game. Abed “Abed” Azel L. Yusop was the driving force for this comeback, with his Ember Spirit finally popping off for the win.

THE COMEBACK IS COMPLETED!

We bring it back from the brink to force a Game 3! You're not going to want to miss the ending to this series. #EGReady https://t.co/NOmjSuGy9S pic.twitter.com/MekxiJ4qgB

In the game three decider, VG attempted to redeem themselves. They’d been in the driving seat for most of game two, and just a few errors had lost them the game. And to do so, they picked up the Night Stalker to try and capitalize on that heroes’ massive power spikes. In the early game, however, EG took advantage of VG’s caution to farm up a quick lead. After 10 minutes, EG started to take control of the game, pushing towers and ganking lanes. But the ganks weren’t enough. As the Dark Ascension started to come out, the Night Stalker became more and more of a threat. After several small mistakes by EG, their opponents were able to capitalize and closed out the game, and the series after 51 minutes.

After today we’re saying goodbye to Fnatic and Fighting PandaS. Both teams won’t be leaving empty-handed though, as they’ve secured $25,000 each and 150 DPC points. Thursday will be a break for all the teams, with all the action starting up again on Friday, with iG taking on beastcoast, and Team Liquid facing Alliance. You can catch all those games, and the rest of the tournament on the Beyond the Summit Twitch channel. And stay tuned to Hotspawn for the rest of our Major coverage.