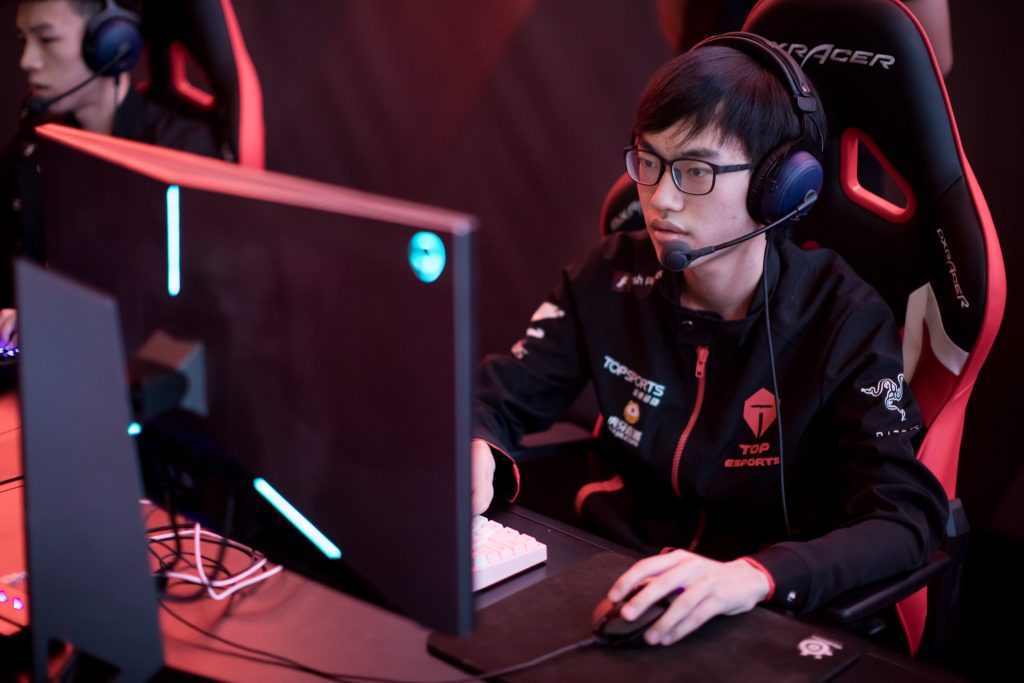 Top Esports are one of three teams still in contention for the third LPL slot at the LoL World Championships. (Image via @LPLEnglish / Twitter)

The final matchup of the 2019 LoL Pro League (LPL) Summer Season is set: FunPlus Phoenix will take on Royal Never Give Up on Friday, September 6 at the Mercedes-Benz Arena in Shanghai, China. FPX beat Bilibili Gaming 3-1 in the first semifinal, and Royal Never Give Up followed that up with a 3-1 win of their own over Top Esports. Both FPX and RNG clinched berths at the 2019 World Championship with their semifinal wins.

FunPlus Phoenix started off their series against Bilibili with a bit of a scare in dropping game one, but the next three games were smooth sailing as the team and their star mid laner Kim “Doinb” Tae-sang clinched their first World Championship berth. They have been China’s most consistent team in 2019 and are loaded across their lineup. All five members of their team made the top two Summer All-Pro teams — jungler Gao “Tian” Tian-Liang and ADC Lin “Lwx” Wei-Xiang made first team.

Their series against Bilibili Gaming went mostly as expected in terms of style. FPX were a better version of the team-oriented BLG squad, but all four games naturally went 36+ minutes because both teams like to get organized. In fact, all four games finished between 36 and 38 minutes in length.

FPX just have the better performing players across all roles this season. Even BLG’s best player in the Summer, Zeng “Meteor” Guo-Hao, was playing against the LPL’s best jungler in Tian. BLG have strong solos in Kang “ADD” Geon-mo and Lee “Kuro” Seo-haeng, but neither is as strong as their counterparts Kim “GimGoon” Han-saem and Doinb. To illustrate the point: BLG’s top half of map — their strength — finished a combined 34/45 in K/D compared to FPX’s 45/24.

As exciting as their qualification to Worlds is, FPX still have unfinished business. They finished the LPL regular season in first place for the second consecutive season, but will be gunning for their first title after being up three games to one by JD Gaming in the Spring. FPX will want to avoid the LCK’s Griffin label of being dominant regular-season performers who can’t get over the hump when the games matter the most. Both will make it to the World Championship, but FPX still have a chance to do so with a domestic title in hand.

UZI, RNG TO MAKE ANOTHER RUN AT A WORLD TITLE

Royal Never Give Up quickly dispatched Top Esports 3-1 in what was expected to be the more competitive of the two semifinal matchups. Jian “Uzi” Zi-Hao was in insane form, dying only once in the series en route to a 25/1/17 K/D/A. His partner in crime — 1st team All-Pro Shi “Ming” Sen-Ming — was just as good, finishing two games deathless and announcing that Yuumi is a must-ban against RNG after his 1/0/14 performance in the clincher.

A very positive development for RNG during the series was top laner Xie “Langx” Zhen-Ying’s willingness to sacrifice his lane as RNG played to give Uzi resources. Multiple times he abandoned large waves without vision, knowing that Top Esports had no way of countering RNG without picking on him or mid laner Li “Xiaohu” Yuan-Hao. RNG helped Xiaohu withstand LPL MVP Zhuo “Knight9” Ding’s by putting him on ranged wave clear champions exclusively.

So once again, RNG went to the protect-the-Uzi composition and were again rewarded with a World Championship berth. As one-dimensional as a team as they’ve become, we must remember that they are really, really good at that one play style. The 2018 World Championship meta was one of the worst possible for ADC-centric teams, and RNG were still competitive in the quarterfinals and a favorite to win it all. That doesn’t even mention how dominant they were in 2018 until Worlds, winning both LPL titles and the Mid-Season Invitational.

Because of that, RNG don’t have the same mental barrier to climb in the LPL finals as FPX. Win or lose, their players have domestic titles to fill out their legacy. Their eyes are squarely on the World Championship. Uzi is the most accomplished player in League of Legends history behind Lee “Faker” Sang-hyeok, but he has never won a World Championship. Twice he’s fallen short in the finals, once in the semifinals, twice in the quarterfinals. Will this be the year?

WHO WILL BE THE THIRD LPL REPRESENTATIVE?

FunPlus Phoenix and Royal Never Give Up have locked up the top two seeds, but China’s third World Championship team is still to be determined. Invictus Gaming, Top Esports, and JD Gaming will battle it out for the third and final LPL seed.

With Top Esports’ win over Bilibili Gaming in the third-place match of the playoffs, Bilibili Gaming were eliminated from World Championship contention. The LPL only has three teams qualify for their Regional Final, the least of the major regions despite having the most teams in their league (16).

JD Gaming have gotten hot before, making it all the way to the LPL Spring Finals. Top Esports have the best player in the LPL in Knight and just obliterated Bilibili Gaming to earn the Finals bye. iG are the reigning World Champions and have as much skill or more as any team in the world. Whoever the LPL sends in that final spot, we’ll know that they had to win big matches against some of the most mechanically gifted teams in the world.

Friday, September 6: FunPlus Phoenix versus Royal Never Give Up

The two most complete teams in the LPL face off in the finals. RNG has gotten here on the back of Uzi, but they haven’t faced a jungler as talented as Tian on their playoff run. Even if he doesn’t attack Uzi directly, his ability to hold down Langx and Xiaohu could be critical for FPX to find advantages elsewhere. But let’s also remember that Lwx, not Uzi was named first team All Pro this Summer. FPX can match up with RNG’s bot lane while still boasting advantages on the top half of the map. RNG will need to lean on their experience in big matches to pull something out against the LPL’s most dominant team in 2019.