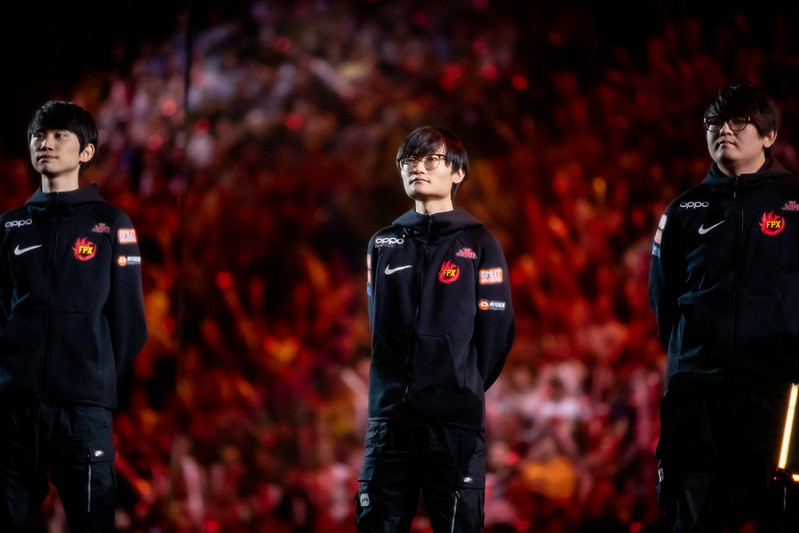 The start of the 2020 League of Legends Pro League (LPL) season is just around the corner. With the addition of eStar, 17 teams will compete over the course of 10 weeks for Spring Split Chinese supremacy. We look at the notable roster changes on each team and where they stack up to the rest of the LPL heading into the new year

The 2019 World Champions come into 2020 even stronger following the addition of top laner Kim “Khan” Dong-ha. FPX have shown their ceiling, but it’s hard to keep up with consistency and motivation after a championship year. Just ask Invictus Gaming, who barely scraped their way into the World Championship with the same roster. Jungler Gao “Ning” Zhen-Ning went from being one of the best in the world to a problem area for iG in the span of months. FPX can’t have a similar struggle if they want to repeat.

2. Royal Never Give Up

It’s tough to go from Hung “Karsa” Hao-Hsuan to a rookie jungler and maintain your place in the top two but Li “XLB” Xiao-Long looked good enough in the Demacia Cup to calm early fears. Expect star bot laner Jian “Uzi” Zi-Hao to take his customary early season break, but this time he’s backed up by a world-class player in his own right in Lu “Betty” Yu-Hung. The question for RNG never seems to be the talent, and it won’t be on this roster. They will try again to find a play style that isn’t reliant on Uzi to hard carry every game. Giving mid laner Li “Xiaohu” Yuan-Hao more carry-potential champions would be a start.

Speaking of Karsa, Top Esports upgraded their jungle spot in a huge way by adding him to their lineup. His veteran presence in a crucial macro role will help TES grow in a big way. TES still have the best mid laner in the world in Zhuo “knight” Ding, so he and top laner Bai “369” Jia-Hao will be the focal points for Karsa. The rookie duo Ying “Photic” Qi-Shen and Liang “yuyyanjia” Jia-Yuan take over bot lane for the departed Lee “LokeN” Dong-wook and Nam “Ben” Dong-hyun.

Invictus Gaming fell apart in 2019 after their loss to Team Liquid at the Mid-Season Invitational. Song “Rookie” Eui-jin’s hiatus coupled with Ning’s drop-off in performance left iG in a hole they never really recovered from during the Summer Split. They didn’t address jungle in the offseason and lost star bot laner Yu “JackeyLove” Wen-Bo. On the plus side, new bot lane duo Ding “Puff” Wang and Su “Southwind” Zhi-Lin were the bright spots of Vici Gaming last year and should do well enough to offset Rookie and Kang “TheShy” Seung-lok. iG will just need Ning or Lu “Leyan” Jue to step up and solidify their jungle role.

Bilibili Gaming will undergo an identity change after losing mid laner Lee “Kuro” Seo-haeng to KT Rolster. In his place steps in LMS import Chu “FoFo” Chun-Lan, his league’s 2019 Summer MVP. BLG will probably take a step back in their macro game, but they should be more aggressive with a dominant laner like FoFo. FoFo should pair well with their rising star jungler Zeng “Meteor” Guo-Hao to form one of the better mid-jungle duos in the LPL. BLG also added top laner Hwang “Kingen” Seong-hoon to compete for playing time with incumbent Kang “ADD” Geon-mo.

There was minimal roster turnover for LNG Esports during the offseason, but both moves are relevant to their standing. Picking up mid laner Huang “Maple” Yi-Tang may be one of the most underrated moves of the offseason. LNG struggled through a platoon of Huang “Fenfen” Chen and Bae “Plex” Ho-young in 2019 Summer. However, losing Lê “SofM” Quang Duy for Xiong “Xx” Yu-Long is a clear downgrade. Li “Flandre” Xuan-Jun remains one of the best top laners in the LPL, so solo lanes will be a focal point. If Lu “Asura” Qi can continue to ascend the ADC ranks in his second split, LNG could be a dark horse contender.

EDward Gaming made a run to second-place at the Demacia Cup, offering hope for fans after a pair of mediocre splits in 2019. The team will continue to run through star mid laner Lee “Scout” Ye-chan, especially on the heels of Hu “iBoy” Xian-Zhao’s departure to Vici Gaming. The team is hoping that new bot laner Wang “Hope” Jie’s performance at the Demacia Cup is evidence of his readiness to make the jump from the LDL to the main roster.

The legendary bot laner Gu “imp” Seung-bin retired this offseason, leaving a huge hole on JD Gaming’s roster. They attempted to fill it by bringing in LokeN, half of one of the worst bot lanes in the LPL in 2019. While most of the poor performance was attributed to Ben, JDG downgraded their bot lane this offseason. Otherwise, the team has brought back the same roster that finished 6-9 in the Summer Split, only a few months after making the Spring Finals. Jungler Seo “Kanavi” Jin-hyeok should have a bigger role with Sung “Flawless” Yeon-jun’s departure.

The biggest acquisition for Vici Gaming was not a player. Legendary head coach, Kim “kkOma” Jeong-gyun, left SK Telecom T1 for a new challenge taking over what was one of the worst teams in the LPL. VG gave him some new toys to work with specifically in bot laner iBoy. Coach kkOma is the perfect match for the mechanical monster iBoy, someone who will find a way to level up his consistency. New mid laner Deng “Forge” Jie joins after filling in capably for Rookie on iG in 2019 Summer. VG had a productive Demacia Cup and should be much improved in 2020.

Dominus Esports have kept most of the 2019 Summer roster intact, dipping into free agency only to address their mid lane. Huang “Xiaowei” Ting-Wei, previously known as “Twila”, started every game for DMO last season and remains on the roster. However, long-time Team WE mid laner Su “xiye” Han-Wei joined and got all four starts in the Demacia Cup. He should see the majority of the playing time to start the year. The team will run through star bot laner Chen “GALA” Wei. Though they had a disappointing Summer, this was a strong playoff team in Spring with the same core. They’ll be in the mix again this year.

Things will look a lot different for Team WE in 2020 after the departure of mainstays xiye and bot laner Jin “Mystic” Seong-jun. They were the longest standing duo with one team in the LPL. WE have added Korean solo lane imports Park “Morgan” Gi-tae and Plex in an effort to upgrade their talent. Just look to the previous world champions, Invictus Gaming and FunPlus Phoenix, to see how important solo carries can be. Still, Team WE will have some growing pains with the new roster. Mystic’s loss can’t be overstated.

After cycling through four different junglers in 2019 Summer, LGD Gaming hope they’ve found their answer in Han “Peanut” Wang-ho. He’ll team with returning ADC Ha “Kramer” Jong-hun to form the Korean import one-two punch on LGD. It’s unusual for LPL teams to commit their import slots on non-solo lanes, but it’s something we saw work out well for JD Gaming, at least during the Spring. LGD probably don’t have the firepower in the solo lanes to challenge the top teams, but it should help team continuity by locking in one jungler for the season.

Very much like LGD Gaming, Oh My God have brought in non-solo lane upgrades this offseason. H4cker and Smlz have joined from Suning, hoping to augment the three-man core of Chen “Curse” Chen, Xie “icon” Tian-Yu, and Liu “cold” Shi-Yu (formerly known as “Five”). But is that really enough to push OMG back into the playoff picture? This was a team that finished 16th of 16 teams in 2019 Summer. Maybe they’re marginally improved, but don’t expect a return to the glory days any time soon.

The Rogue Warriors were very interesting when they had Doinb and Smlz in 2018, but they fell off to a bottom-tier team in 2019. They’ve added mid laner Lee “Ruby” Sol-min and former EDG jungler Chen “Haro” Wen-Lin to try to upgrade the roster, but those moves don’t really do enough to move the needle. The team will still run through bot lane star Mei “ZWuJi” Hong-Hui, as is tradition in the LPL.

Victory Five are really a decent team, even if they only check in at 16th on the list. They will likely end up better than that in the standings, especially coming off 13th and 12th place finishes the past two seasons. The problem with V5 is that they just don’t have the ceiling that other teams have in the LPL. They’ll be able to beat up on some roster-shuffling teams that have lost their way, but they will end up over-matched by most other teams when they bring their A-game.

The newest addition to the LPL, eStar are run by former Invictus Gaming top laner Liu “PDD” Mou. It’s hard to judge where they stand, considering they bring with them a bunch of rookies, but they do also bring former Flash Wolves support Liu “ShiauC” Chia-Hao. It’s unlikely that eStar impact the standings in their inaugural season, but their team is loaded with high performing LDL players. It’ll be worth following which, if any, pan out at the next level.

The LPL 2020 Spring Split kicks off on Monday, January 13 at 1 a.m. EST and will play Monday – Sunday. Reigning World Champions FunPlus Phoenix will take on 2018 World Champions Invictus Gaming in the opener.