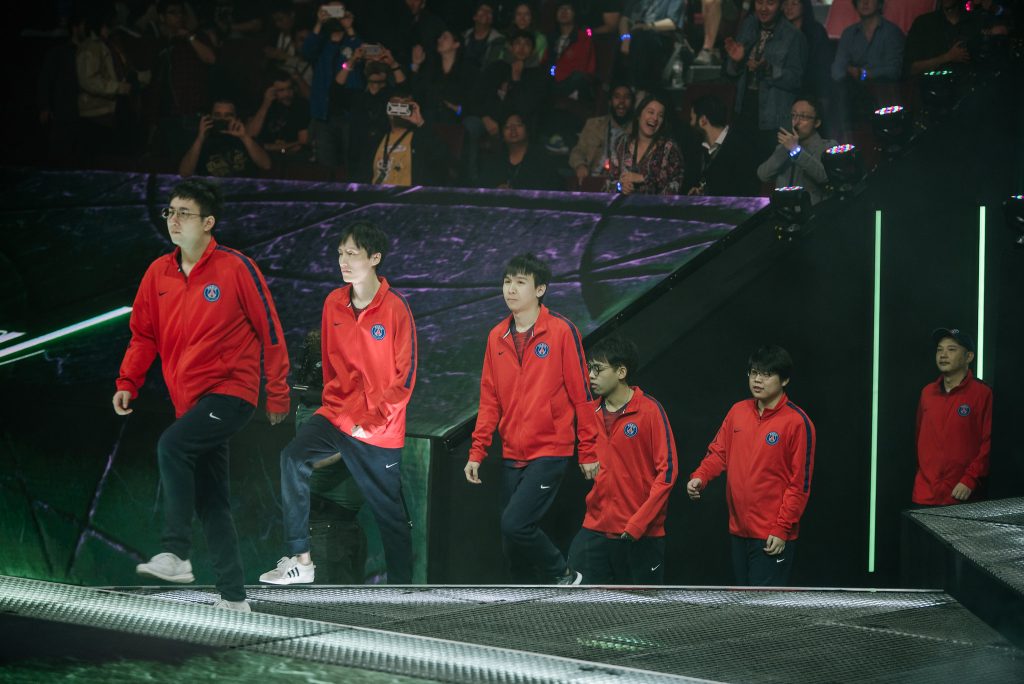 LGD have successfullly redeemed themselves for their last place result at ESL One Los Angeles. (Photo courtesy Valve)

PSG.LGD Gaming have completed their road to redemption by taking the Chinese division championship at ESL One Birmingham. This result comes more than three months after their poor showing at ESL One Los Angeles, where they looked completely lost and unable to generate any sort of rhythm.

At Birmingham though, the story could not have been any more different. LGD rampaged through the group stage, beating defending LA champions Royal Never Give Up on their way to a 6-1 score in maps to clinch their spot in the playoffs. They began the bracket stage auspiciously, sending Group B second placers Invictus Gaming straight to the lower bracket without breaking a sweat.

This first round saw LGD’s trio of cores pop off as they are known to do, with legendary mid laner Lu “Somnus丶M” putting on a show as Queen of Pain and Templar Assassin. He went for a combined KD ratio of 29 kills and just four deaths throughout the series — thus putting the whole region on notice and reminding everyone just what it is that he’s capable of.

Chalice is fountain diving even though the Tier 3 Towers are still up! #ESLOne 😱😱

Not to be outdone by his mid laner, consummate carry player Yang “Chalice” Shenyi likewise dazzled LGD’s legion of fans with his performances as Lifestealer and Ember Spirit. He played the latter especially well, dealing even more damage than Somnus丶M’s Templar Assassin at 45,200 points. Riding his hot hand, the rest of LGD simply overwhelmed iG in the second game with 43 kills to just 12 on the losing side.

A resounding victory for @LGDgaming as they move on into the Grand Finals of the #ESLOne Birmingham China Region. pic.twitter.com/STNuNzJig4

On the other side of the bracket, defeated CDEC Gaming two games to one to set themselves up for a rematch with LGD. Unfortunately for them, they fared even worse than they did in the group stage, dropping both maps to their rivals and getting sent to the elimination rounds as a result. LGD’s cores once again took over the match, though this time Ren “eLeVeN” Yangwei was able to flex his muscle as Beastmaster and Brewmaster. His Beastmaster in particular did a lot of work when it came to taking objectives, thanks to the whopping 8,300 points of building damage he was able to put out.

With LGD now waiting in the grand finals, RNG looked to bounce back by eliminating iG to score a third rematch with their nemeses — but the exact opposite is what happened instead. Finding an incredible amount of confidence and poise, iG convincingly disposed of the defending champions, with a monster Storm Spirit performance by Zhou “Emo” Yi being the highlight of the series. He went 20-1 in kills and deaths in the final game of the series, striking immense fear into RNG wherever they went on the map. The sheer pressure allowed iG to close out the match in style, utilizing their strong Beastmaster and Lycan-based timing window to the fullest.

And so, it was Invictus Gaming who came from the lower bracket to face LGD in the grand finals. Given that both teams finished in the bottom spots at ESL One Los Angeles, the match itself was an exciting prospect. Both teams had their shot at redemption, but it was LGD that won the day much to iG’s disappointment.

Crucial Storm Spirit catch from @LGDGaming – they were able to take 3 heroes down without losing anyone! This looks like the turning point for this game! #ESLOne https://t.co/FPiR3z0vLV pic.twitter.com/FpEbm1jLLJ

The first game went LGD’s way, in spite of a lukewarm performance by Somnus丶M as Invoker. Chalice was there to save the day even as Somnus丶M struggled, thanks to his great play as Lifestealer. His Desolator timing allowed them to take Roshan just a few minutes later and claw their way back into the game after a less than ideal start. The net worth slowly creeped to their side going into the mid game, which they were able to hold onto until the final, game-deciding teamfight at around the 45 minute mark.

iG struck back in the second game, clearly unfazed by the loss in Game 1. Their strong teamfight-heavy draft centered around crowd control ultimates allowed them to impose their will on the map often and with relative ease. The sheer number of area of effect stuns and disables coming from the side of iG let them take engagements on their own terms and keep LGD’s cores from having free rein over the battlefield.

What a turnaround from @LGDGaming – they turned the gank around and got 3 kills without losing anyone! #ESLOne pic.twitter.com/Nwry12UOC0

Despite iG’s solid answer in the second game, though, LGD refused to let the match get away from them in Game 3. The players in the blue and red uniforms blitzed iG in just 20 minutes, utilizing their Lycan timing to the fullest in order to win the many skirmishes they started all over the map. LGD had the pedal to the metal from the early game, turning initially bad engagements around to get the advantage right away. From there, iG were simply unable to catch up.

Deciding that it was high time for them to claim the Chinese throne once more, LGD put iG away in the fourth game by drafting Templar Assassin for Somnus丶M and Spectre for Chalice. Somnus丶M snowballed way out of control against Emo’s Puck, and with the blazing fast Blink Dagger/Desolator timing crushed the rest of iG with no trouble at all.

They were even able to secure Roshan as soon as he purchased his Desolator, giving them an incredible advantage to work with in the mid game. Chalice then moved in with his 20-minute Manta Style timing, which helped seal the deal regardless of the double dieback from Somnus丶M thereafter. LGD’s discipline soon kicked in afterwards, and they held onto their net worth advantage to force a GG call just shy of 30 minutes elapsed.

Knowing that LGD have not been quite at the same level as their reputation, this result definitely should spark plenty of confidence in the squad going forward. Invictus Gaming will also be happy with how far they got in this tournament — and considering their results in recent Chinese events, should be a team that others in the region must prepare for.