Leza: “I Think JackeyLove is the Best Bot Laner in the Tournament” 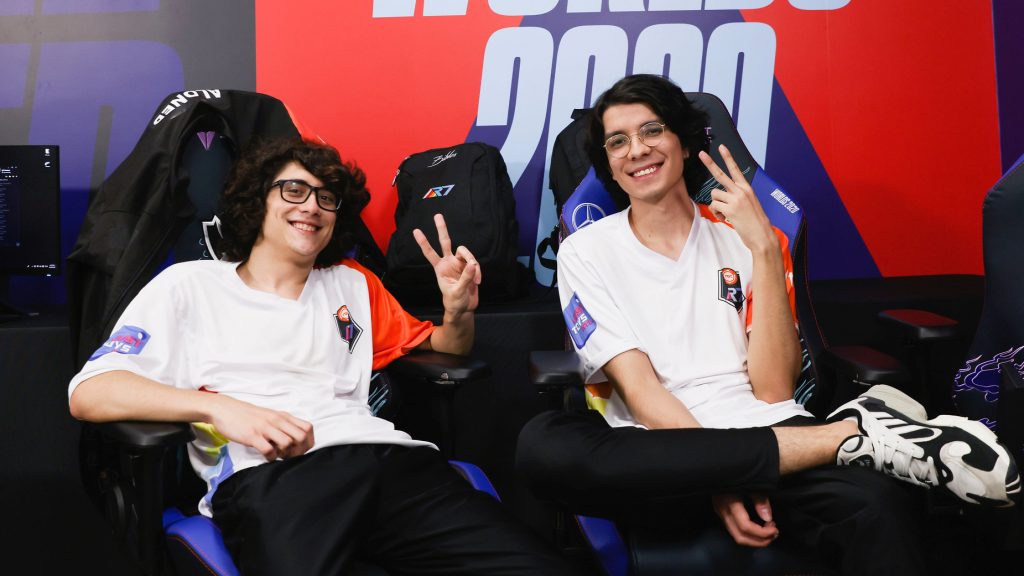 Rainbow7 awaits a tough task if they still want to qualify for the Worlds Group Stage. (Photo courtesy Riot Games.)

Rainbow7 have to pull themselves up by their bootstraps after the first day of the League of Legends World Championship. Their match against PSG Talon didn’t go well at all, as they suffered a pretty one-sided loss. But one loss is just that, one loss. The team still has three other opponents to face to stay in the running for a ticket to the Group Stage.

After their match, we were joined by Rainbow7 bot laner Francisco Rubén “Leza” Jara Barragán. He spoke to us about the role swap he made at the start of the second split in the LLA, going from the mid lane to the lower half of Summoner’s Rift. Leza discussed how it has been for him to play in this new role, learning to pay alongside a support player, and what the implications are for the World Championship. He also spoke to us about his team’s strengths and what they need to iron out if they want to rack up some wins in the coming days.

Hotspawn: Welcome, Leza! Before we talk about specific matches, I want to discuss something that not many people may know about you: you originally are a mid laner, but you swapped to the bot lane position. When heading into Worlds, did you scout other bot laners?

Leza: So yes, I did a role swap and went to the bot lane. But to be completely honest, I always have my eyes on the mid laners. Especially players like ShowMaker and knight, for example. Mid is the role that I had always played. But when I made my role swap I did need to start looking at good bot laners from the other regions at Worlds. I think JackeyLove is the best bot laner in the tournament, for example. So I have my eyes on both roles. *laughs* I don’t know, I just always had the feeling that I was a mid laner and now I’m an AD carry.

Hotspawn: JackeyLove is obviously a very big name in the Group Stage, but which players in the Play-In stage did you monitor closely?

Leza: In the Play-Ins I look at players like Carzzy, but also about Kramer because he’s from the LPL. I think Tactical from Team Liquid is also someone I followed. In the LLA we often play our solo queue on the NA server, so I played against Tactical quite some times. I think these are the ADs that I look up to in the Play-Ins.

When I have to play passively, I try my best to do that.

Hotspawn: When players swap roles they bring their previous roles’ champion pool with them. Does your mid lane experience bring you advantages at this Worlds?

Leza: In this meta, I don’t think you can bring that many different champions to the bot lane. I think the meta is too focused on a small group on champions such as Ashe, Jhin, Kalista, Ezreal… you can play Senna too. But with Senna especially, you can play a lot of other champions as well. Things like Maokai, Tahm Kench, or Sett, for example. You can even play Yasuo sometimes. So I do like to play different champions, but it’s difficult to bring something like a mage in this meta. Syndra, for example, was nerfed a few times.

Hotspawn: What about your playstyle? Can you apply some of the things you learned through playing in the mid lane in your new bot lane role?

Leza: Well, what I did a lot in the mid lane is fight. I was always looking to fight with my opponent in the mid lane, so I really like to do that too in the bot lane. But it has changed a little. I’m no longer playing a 1v1, I’m now in a 2v2 situation. It depends on the supports too if you have to play passively. Sometimes your jungler is on the top side of the map. A mid laner can fight all the time, but that’s not the case when you’re playing AD. When I have to play passively, I try my best to do that.

Hotspawn: How is it to, all of a sudden, play with somebody else in your lane? Was it difficult to make that synergy work?

Leza: It was kind of weird when I had just swapped roles. But I feel more comfortable now. We play a lot of duo queues here in China because I didn’t have that great of a solo queue experience. Shadow went to Challenger too fast and I couldn’t catch up with him quickly enough. But I have a good relationship with Shadow outside of Summoner’s Rift, and that helps too to have good synergy in the lane.

Hotspawn: Moving on to the next topic: In the early days of Worlds it’s often hard to pin down what exactly the meta will be. Scrims give some indication, but it always shifts when the tournament actually starts. How was it for you to figure out what the meta would be?

Leza: I think the patch of Worlds is not too different from the last one. Like I told you, I don’t think you can play that many champions in the AD carry role. But Caitlyn got a small nerf, for example. When we were playing scrims against the super good teams at Worlds, we found out what the good picks are for us to bring. We recently found a new pick that we didn’t try before, and now we’re testing it in scrims. It has been working well for us, so we’ll probably pick it too here in the Play-In stage.

Hotspawn: Rainbow7 has a pretty aggressive playstyle, often looking for fights with their opponents. This can catch opponents off-guard, but sometimes you get too impulsive and overaggressive as a team and then it backfires. How have you worked on polishing this playstyle for Worlds?

Leza: For our team, I think the greatest strength is that we fight very well. I think it’s actually our biggest advantage in the game. But yes, sometimes we get too aggressive and we’ll die, waste Summoner Spells and stuff like that, and that costs us a lot in the game. It is something that needs to be fixed by communicating better, I think.

Hotspawn: The LPL is well-known for its constant fighting. Do you review games of Chinese teams to learn how to play your aggressive, fight-oriented style better?

Leza: Yeah, in our reviews we say that we want to have a 20-20 scoreline in kills at ten minutes into the game. *laughs* That’s what we like to do.

Hotspawn: Unfortunately you lost your first match at Worlds. Is Rainbow7 a team that can shake off a loss easily?

Leza: I think we need to talk as a group and see what happened in the game today. We need a mental reset for tomorrow. It will be a very important day since we play two games. One against LGD Gaming, who is probably the best team in this group, and one against V3 who is very strong too. We need to have a bit of a group talk and get in the right mindset for tomorrow.

Hotspawn: Since you’re playing against two different opponents on one day, how are you going to stay focused on one opponent at the time in your preparation?

Leza: I think we cannot get affected. Even if we lose our first game, we will not be salty. Whether we lose or win, we have to stay the same. We need to have the same mentality for both games. I think that’s the key. But I don’t think we have any special training to do that, though.

Rainbow7’s next match at Worlds will be against LGD Gaming on September 26 at 1 p.m. CEST.