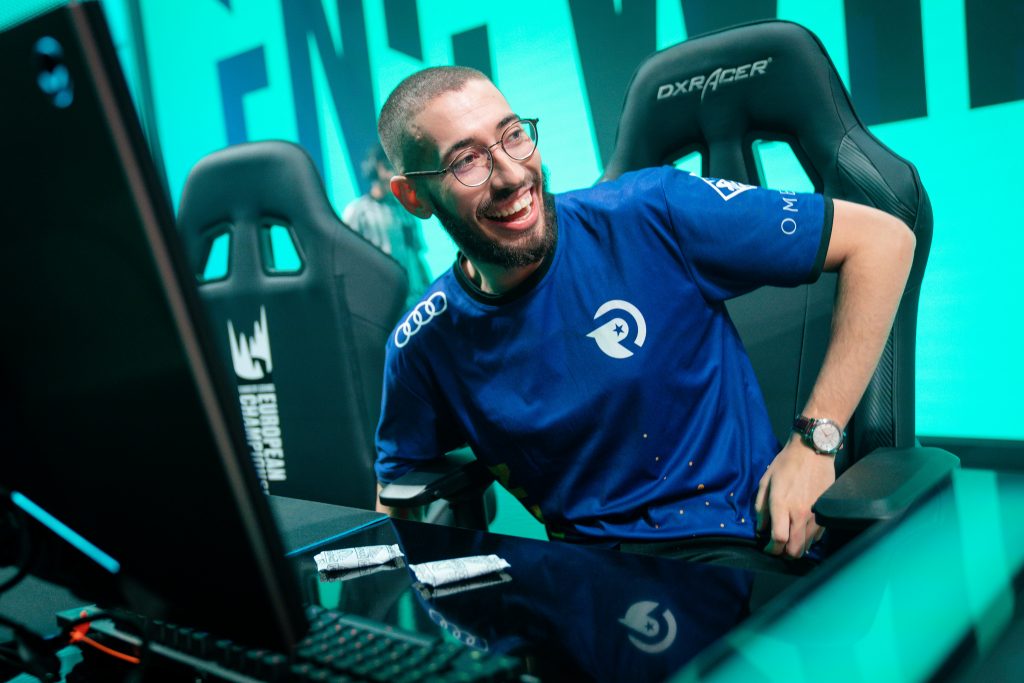 Week 5 of the 2019 LEC Spring Split is in the books. G2 Esports were finally handed their first loss, while Rogue picked up their first win as a member of the LEC. We take a look back at the match results, top storylines, best plays, and standout individual performances from the past week in Europe.

G2 Esports finished the first half of their season 9-0 after defeating every LEC team in their first matchup. Origen got the first crack at a rematch with G2 and they took advantage.

Things were obviously different in the second matchup just six and a half minutes into the game. Nukeduck held the final red side counter pick in the draft, taking Zed into Caps’ Cassiopeia. He showed us why by picking up a solo kill right when he popped level 6:

Jankos camped top early, picking up 3 kills there in the first ten minutes of play. The help was necessary for Wunder, who was laning Sylas into Alphari’s Kennen.

Probably the most surprising early success for Origen was their bot lane winning lane. Ezreal and Rakan don’t seem like a lane that should have kill pressure on Sivir and Pyke, but Origen were on the offensive throughout the laning phase and picked up a 2v2 kill on Mikyx just after 11 minutes.

The Zed/Karthus ult combo was great for Origen in picking off G2’s carries throughout the game. Caps and Perkz had to be so careful in their positioning because just getting in range of Nukeduck’s Zed R range meant potential death.

Picks on Wunder and Jankos just before 23 minutes were all Origen needed to accelerate the game into a win. OG were able to take Baron, their second infernal drake, and push down turrets to put G2 at an ever larger gold deficit.

OG were in total control from start to finish in their 33-minute win. Patrik carries a perfect 5/0/5 K/D/A on Ezreal in comparison to Perkz’ 0/3/0 on Sivir.

Not even G2 Esports were able to win on Sylas, bringing the champion to 0-4 in the LEC.

G2 Esports remain comfortably in 1st place despite the loss with a 2 game lead over FC Schalke 04 and Team Vitality. Origen’s surge has brought them to 6-4 with a tie for Splyce for 4th place in the LEC.

On the other end of the spectrum, Rogue started the first half of the LEC Spring Split winless. Given their lack of early results, they made a couple of changes to their starting roster for week 5. Profit was subbed out for Finn top lane, while Vander made his return to the LEC in place of Wadid at support.

Rogue didn’t find a positive result in their first game of the week against FC Schalke 04, but their improvement was on display against Misfits Gaming in game 2.

Kikis started the second half of this split like he did with Team Vitality at the end of 2018 — by getting things done in the early game. Maxlore’s Lee Sin tried an early dive onto Sencux’s Corki, only for Kikis’ Pantheon to be there for a counter gank. Sencux survived with a sliver of health and Kikis was able to pick up First Blood for Rogue.

All told Kikis participated in the first 3 kills of the game as Rogue jumped out to an early lead. Misfits were able to pick up the next few kills for Febiven in heavy skirmishes, allowing him to accelerate his Ryze build.

The game was very even at 23 minutes. Rogue led with 2 drakes to 1, but Misfits led 2 turrets to 1. Gold was even at 38.4k apiece, as were kills at 4-4. Rogue found the pick onto Gorilla and used that advantage to set up vision control and tend to the side waves.

It paid off only a minute later as Rogue picked off Hans Sama under his mid turret. Rogue took that turret and turned toward Baron, catching Maxlore out in the process. This gave Rogue a free Baron and put them up 3.5k gold at 25:30.

Kikis’ Pantheon ultimate once again caught Hans Sama out under his turret, and Rogue used that with their Baron power to steamroll through Misfit’s base.

Not only was it their first win of the season, but it was Rogue’s first win as a member of the LEC.

Misfits Falling Out of Contention

It was one thing for Misfits Gaming to get crushed by G2 Esports in their first game of the week. Everyone knows the potential that Misfits have in their individual players, but the team had not come together like G2 has so far in 2019. Sure it would have been nice for them to make the game competitive, but they weren’t losing any points by looking outmatched against a previously undefeated team.

Losing to Rogue is a different story.

Teams can benefit from changing their roster to breathe some new life into a situation, but subbing in Finn and Vander were not moves that should have intimidated Misfits on an already 0-9 lineup.

Maxlore had his worst game of the split and was constantly caught out of position by Kikis. Hans Sama allowed Rogue to take Baron off his first death, then died in the exact same way to clear Rogue’s path to victory.

Misfits look out of sorts as a team if their individual laning phases don’t carry them to a win. Even with their early missteps, they had the game evened up by 23 minutes. Rogue found pick after pick by holding better control of the map and closed the game out only 4 minutes later.

It was expected that Misfits would take some time to come together as a team, but it is concerning that they seem to be getting worse as the season goes on. They are now 1-6 in their last 7 games after starting the season 3-0 and have dropped all the way down to 7th place in the LEC, out of a playoff spot.

Don’t be surprised if a new voice is brought in to give the team a new direction before the Spring Split is over.

Once unthinkable before the start of the season, SK Gaming has swept Fnatic in the 2019 Spring Split 2-0, and that’s not even including the re-made game that saw SK with a large lead.

Fnatic picked up the first 3 kills of the game, took a 5-minute ocean drake, and had Rekkles on a crit carry. How did they lose?

SK picked on Bwipo in side lanes, knowing that he would try to bully Werlyb in the Urgot vs Sion matchup. The global pressure of Karthus in the jungle made it hard for Fnatic to press forward as well.

Most importantly, though, Fnatic had scaling carries in Kassadin and Tristana. They had no interest in fighting SK Gaming’s Syndra and Ezreal when grouped, as they spike earlier. Unfortunately for Fnatic, that meant giving up the next 3 drakes — including an infernal — and allowing the gold lead to level out rather than snowball.

Fnatic held a near 2k gold lead at 26 minutes when SK Gaming started Baron. Fnatic forced their hand by having Nemesis split push bot while no SK member was matching him.

Before Nemesis could even start channeling his teleport, Hylissang was caught out by Dreams’ Thresh hook and Fnatic lost their advantage. Rekkles ate a Syndra ult into Karthus ult and all of a sudden SK Gaming found 4 kills and an uncontested Baron.

With the win, SK Gaming hold a very important tiebreaker over the now 3-7 Fnatic. Fnatic will either need to make up 3 games on SK Gaming in the final 8 games of the split or hope another team goes into free fall for them to make playoffs in the Spring Split. For SK Gaming, the win bumps them up to 6th place, just ahead of Misfits Gaming for the last playoff spot.

Player of the Week: Nukeduck

Nukeduck died only once on the weekend in Origen’s two wins. He went 3/0/3 on Corki against Excel Esports, but his more impressive performance was against G2 Esports. You already saw his solo kill on Caps above, but he finished out the rest of the game with a 5/1/4 score and doubled Caps’ damage to champions 16.7k to 8.7k.

Nukeduck holds the largest gold share % among LEC mids for the season, averaging 22.7% of Origen’s gold per game. That makes sense with how well he’s been able to generate advantages in lane so far in 2019. Often the forgotten man behind Caps and Perkz in the mid lane in the LEC, Nukeduck crushed both of them in a single game this week to ruin G2 Esports’ chance at a perfect Spring Split.