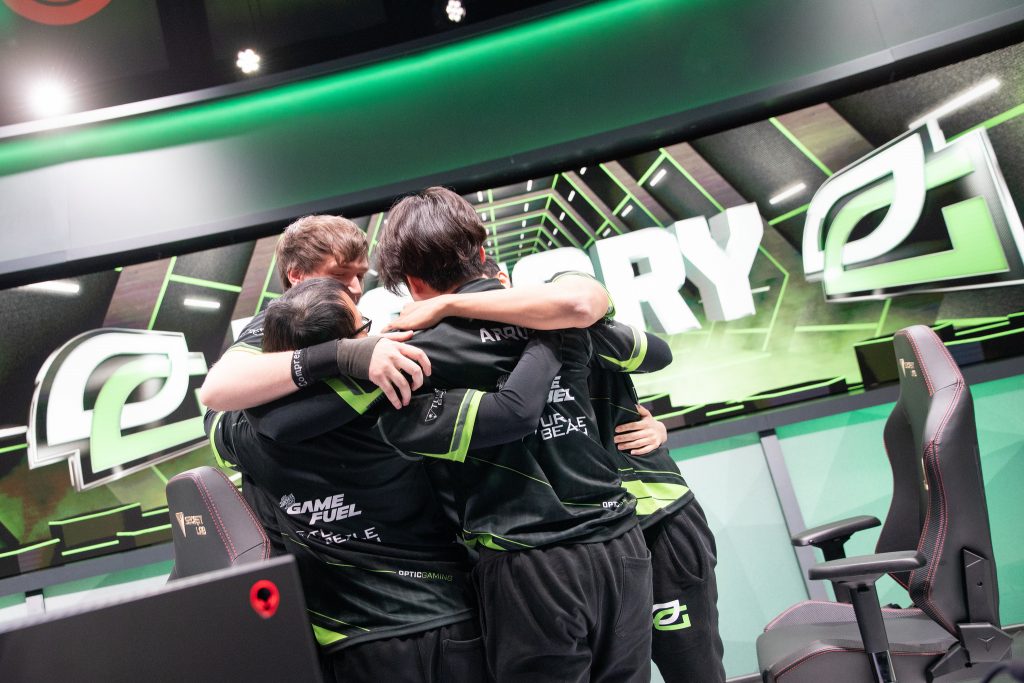 Despite a rocky start to the split, OpTic Gaming is hoping to bounce back after going 2-0 this past weekend. (Photo courtesy of Riot Games)

We’re through the fifth week of the LCS 2019 Spring Split, but this was a week of fours. Team Liquid, Cloud 9, Team SoloMid, and OpTic Gaming all had perfect weeks and are trending up in the standings. Meanwhile, the four organizations that joined the LCS during franchising comprise the bottom four in the league. We take a look back at the match results, top storylines, best plays, and standout individual performances from the past week in North America.

The first three names on this list probably shouldn’t surprise you. Despite their loss to TSM last week, Team Liquid are still clearly the class of the LCS. Echo Fox and the current form of 100 Thieves were not expected to pose any threat this week, and neither team did. TL won both games efficiently, posting 10-3 kills against EF and 8-1 against 100T.

Cloud 9 faced a tougher test this week. FlyQuest entered their match with C9 only 1 game behind them in the standings and had already shown the capability of beating a top team like TSM.

FlyQuest had the early lead before it fell apart. WildTurtle got crowd controlled under a C9 turret, allowing C9 to make the pick and take Baron afterward. Though he did end up stealing the next C9 Baron attempt at 30 minutes, WildTurtle was repeatedly foiled by Sneaky’s Cassiopeia and her grounding W Miasma. C9 took the win 22 kills to 13 in 34 minutes.

CLG had already beaten C9 in the first round robin, so it was critical for C9 to pick up the win in their second matchup. CLG picked up First Blood, but that was about the only positive for them in this game. Nisqy immediately returned two kills on a teleport down and C9 ran away with this one, winning 13 kills to 4 in 27:30.

Speaking of CLG, they were TSM’s first match of the week. CLG had not beaten TSM since April of 2016, and that did not change in this one. TSM absolutely demolished CLG in every respect. Smoothie and Zven picked up First Blood on Stixxay at level 2, then killed him again at level 4 before Bjergsen could even complete his roam bot.

But it wasn’t only bot lane that TSM was winning. They took an incredible 15 tower plates to CLG’s 0, a 2.4k difference on plates alone. CLG never had any chance to make a play with such a devastating early game and TSM won 7 kills to 3 in under 25 minutes.

Once again FlyQuest was a more worthy opponent this week. They had the early game lead on TSM, just like they had on C9. WildTurtle made a beautiful play bot for First Blood at the same time that V1per and Santorin won a 2v2 top lane.

However, TSM played perfectly to their win conditions. They wavecleared with their double lethality combo to weather FLY’s early pressure, then used it offensively to whittle FLY down and take objectives. TSM needed only 4 kills throughout the game to take the win in 40 minutes.

That win brought TSM’s win streak to 4 straight games. The clear top 3 in the LCS through week 5 is Team Liquid, Cloud 9, and Team SoloMid — in that order. FlyQuest is a tier below, but also is clearly the fourth best team in the LCS and is playoff bound.

Meanwhile, the bottom four teams in the LCS currently are the four most recent additions during franchising. Not much, if anything, separates Golden Guardians and OpTic Gaming from Echo Fox and Counter Logic Gaming right now, but as it stands these four would be the teams out of the playoffs in the Spring Split.

OpTic Gaming and Golden Guardians look to have the most promise for improvement. OPT went 2-0 in week 5, picking up wins over their bottom tier competition in 100 Thieves and Clutch Gaming. They showcased their ability to roster swap for certain matchups, putting in Dardoch over Meteos against Clutch Gaming for his familiarity with the roster and his ability to play Jayce in jungle.

Crown has looked much better in North America than he did all last year with Gen.G and suddenly doesn’t look like a downgrade from PowerOfEvil. Both Meteos and Dardoch have played well for OPT, giving them a formidable jungle duo — though Dardoch has a 3-2 record compared to Meteos’ 1-4.

OpTic’s struggles have mainly been in the top lane, where Dhokla ranks near the bottom in every major statistical category among top laners, despite often playing split-pushers. Allorim was given 2 games early in the season while Arrow had his visa issues, but OpTic need to find a long term solution in that role.

Golden Guardians have been coming on strong lately, but their loss to Clutch Gaming was concerning. Froggen has played very well in his return to the LCS, but Contractz and Olleh have continued to look poor in 2019. It would not be surprising to see GGS make a change at support, despite the amount they likely have invested in Olleh.

Clutch Gaming did pick up an aforementioned win against Golden Guardians this week, showing life. As they did last year’s Spring Split as well, Riot scheduled a Clutch Gaming vs Golden Guardians match on the same day as a Houston Rockets vs Golden State Warriors game. The Rockets owned squads won both this year. Clutch Gaming picked up a 16 kills-to-5 win in 25 minutes, while the James Harden-less Rockets won 118-112 in Oracle Arena.

That brings us finally to the most disappointing team in the LCS in 2019: 100 Thieves. Another 0-2 week finds them at 3-7 on the season, in a tie for last place with Clutch Gaming. Fresh off a debut year in which they finished 2nd in the LCS Spring Split and made a Worlds appearance, they seemingly upgraded their roster in the offseason by acquiring Huhi and Bang.

Bang has been fine, but the duo lane has not. It always feels suspect to put the blame entirely on one person in the duo lane, but Aphromoo has clearly had a rough Spring Split. His KDA of 1.43 is last in the league among supports, and his kill participation of 48.8% is last in the league among all players with more than 1 game played. The next lowest kill participation among supports is Olleh with 62.3%. The gap between Aphromoo’s 10th place KP and 9th place KP is about as large as the gap between 9th place KP and 1st place KP. That’s not good.

100 Thieves certainly have the time to turn it around and have the track records to say the players can do it. But right now, they have earned their tie for last place in the league despite being one of the most hyped teams entering 2019.

Player of the Week: Smoothie

Akaadian promised that TSM would smurf soon. Little did we know that he was talking specifically about Smoothie. After a lost 2018 in which he was benched on C9 for Zeyzal and had a lackluster split with Echo Fox, Smoothie has returned to form to make one of the best bot lane duos in the LCS with Zven.

His Thresh absolutely destroyed Stixxay and CLG in their first game of the week. Smoothie picked up First Blood on Stixxay’s Ezreal at level 2 by hitting a nice Q Death Sentence on him under his turret. The carnage did not stop there, as Smoothie was able to hand Zven two kills on a silver platter before 7 minutes by continually picking Stixxay off. That’s very impressive when you consider that Ezreal is the best ADC at evading those picks.

He also played well in TSM’s win against FlyQuest. After Zven’s little hiccup gave up First Blood to FLY, the TSM bot lane went deathless for the rest of the game. Smoothie had several clutch W Devours and utilized his R Abyssal Voyage to make plays across the map. He ended with the perfect support stat line: 0/0/4 with 100% kill participation.

It was a gamble for TSM to break up the historic duo of Zven and Mithy. But given the play of Broken Blade and Smoothie so far this split, the move has paid off handsomely for TSM.