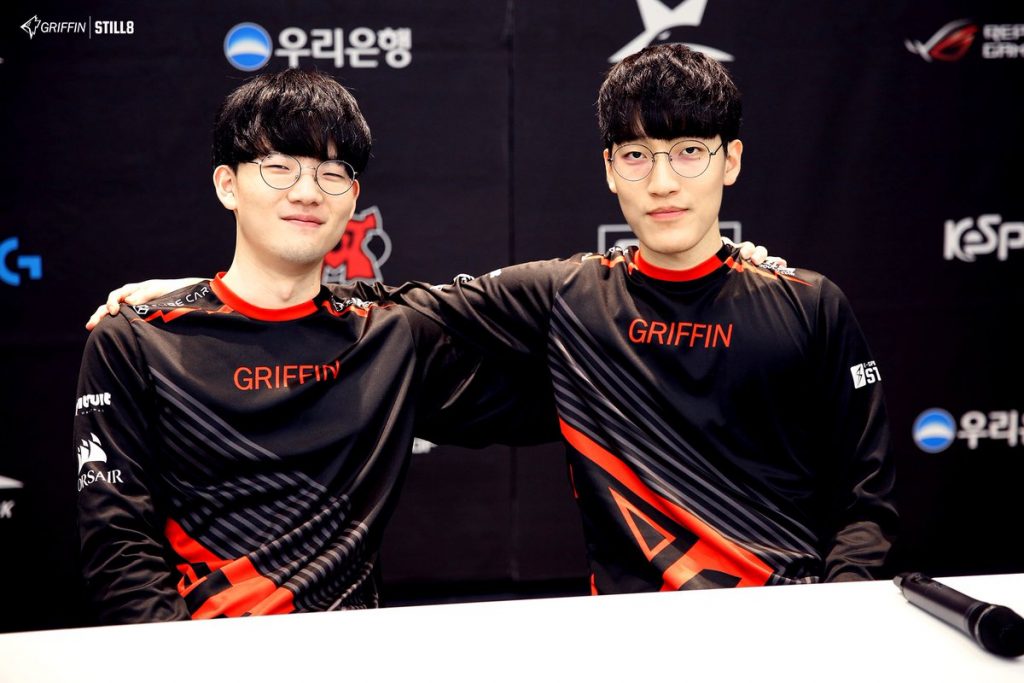 Week 4 in the 2019 LCK Spring Split was an exciting one with young guns of Griffin, Damwon Gaming and Sandbox Gaming all going 2-0 (Image courtesy of Griffin Gaming)

Week 4 in the 2019 LCK Spring Split is done. Griffin sits atop the standings, while Jin Air Green Wings are the only team yet to pick up a match win. We take a look back at the match results, top storylines, best plays, and standout individual performances from the past week in Korea.

It was another great week for the younger teams in the LCK. Even as the patch shifts to 9.3 and a more ADC focused meta, the teams that are proactive and aggressive early are being rewarded so far.

Griffin always make sure that they have champions to force plays, and their matchup against KT Rolster was no different. In game 1 they picked up Zac and Galio, champions that can force fights from across the screen. In game 2 their composition was more centered around finding picks with Tarzan’s Lee Sin and Chovy’s Zoe, but they still had the added insurance of Lehends’ Alistar.

Against Afreeca Freecs, it was more of the same. Tarzan played Nocturne in both games, holding insane pressure and the ability to force plays at any time. He finished the series 8/0/16 on the champion. Lehends had more games on Galio and Alistar, while Chovy played Zoe and Lissandra.

DAMWON Gaming had similar ideas, though they used different champions to accomplish the same goal. Showmaker picked Leblanc in 3 of 4 games against Jin Air Greenwings and Afreeca Freecs, while Canyon and Punch went to Olaf or Lee Sin all 4 games in the jungle. The early priority from mid lane was crucial to their plan.

For the long-range map movements, DAMWON had Hoit pick up Tahm Kench in 3 of 4 games. This allowed DWG to set enable strong split pushers to get out on the map knowing they had protection for them with Tahm Kench turning a fight around. Incidentally, Tahm Kench is great at disengaging an attempt on the 3 or 4 man squad opposite the split push.

These young teams are prioritizing the ability to make plays across the map, whether reactively or proactively. It’s part of what’s made it so exciting to watch the new generation of Korean talent. Gone are the days of waiting until your opponent makes a mistake, and in are the days of forcing your opponent into a mistake.

We know now that teams like Jin Air Green Wings, Afreeca Freecs, and KT Rolster aren’t the ones you get excited over beating but think about what that means. These young teams are crushing teams built around Smeb and Bdd, Kiin and Ucal. The early success has not been a fluke and these young teams are here to stay.

SKT won both of their series this week against Kingzone DragonX and Gen.G but were surprisingly crushed in the opening games of both series.

Khan’s Viktor picked up First Blood on PawN’s Azir in game 1 after a questionable stopwatch by PawN allowed Clid and Khan to set up an easy kill. Unfortunately for SKT, that would be the only kill they would pick up the entire game.

KZ took the first three drakes uncontested and pulled out a 5k gold lead thanks to a 4 to 1 turret advantage. KZ found a pick onto Faker’s Sylas just after 29 minutes and were able to transition that to a quick Baron take with the mountain drake in their back pocket.

KZ continued to extend their gold lead by farming both jungles and taking more turrets, snowballing it to a 10k gold at 35 minutes. SKT tried to force onto Deft’s Ezreal, but KZ were able to disengage and take an easy 5-0 fight win and the game.

SKT easily controlled both games 2 and 3 from start to finish, but their propensity to go to 3 game sets continued.

Crazily enough, they lost their first game to Gen.G while again only picking up 1 kill.

CuVee’s Urgot solo killed Khan’s Sylas at level 6, not something you like to see when you give your top laner a carry. Clid’s Lee Sin picked up a return kill minutes later, but again, that early kill would be the only one SKT got all game.

The first big skirmish of the game happened at 11:30 in Gen.G’s red side jungle. SKT invaded for vision control and tried to pick off Fly on their way out. Instead, Gen.G collapsed with their bot lane and teleport from CuVee. Teddy’s Kalista was late to the fight as Gen.G’s bot lane had priority roaming up.

Gen.G picked up 3 kills and sported a 1.3k gold lead from the team fight win. With that lead, Gen.G took down SKT’s outer ring of turrets and controlled the drake pit, taking an ocean, air, and infernal drake uncontested.

SKT finally tried to contest the second infernal spawn at 32 minutes, but they were wiped 3 kills to 0. Gen.G collected their second infernal drake before taking Baron uncontested. Gen.G used Baron on their next push to easily end the game.

What is obvious through dissecting their losses is that SKT did not try to make proactive plays when behind in these games. Sure their team composition wasn’t conducive to winning a big team fight, but they never were able to find any picks against teams struggling in the standings.

SKT instead just allowed the leads to snowball until a point that they had no shot of winning a fight. Then they were forced into fights at neutral objectives and were predictably wiped.

SKT have shown that they can easily control games where they get ahead early. Now they need to show that they can fight back in games in which they fall behind.

Hanwha Life Are The Gatekeepers

Gen.G and Kingzone DragonX may have thought they were destined for more in 2019, but their matches against Hanwha Life say otherwise. Hanwha Life controlled both series 2-0 and sets up an interesting final match of the first round robin in Korea.

Hanwha Life take on DAMWON Gaming Friday night to round out the first half of the split. DWG are below Hanwha in the standings but have shown a resurgence in the past week. Are they in contention for one of the top teams in Korea? Playing the rock-solid Hanwha Life squad will be a good litmus test to see whether they are a contender or a pretender in the LCK.

Player of the Week: Tempt

Lava got the majority of the games for Hanwha Life Esports to begin the season, but Tempt has been incredible since being inserted into the starting lineup. His Zoe tore Gen.G apart this week, finishing 4/1/8 in game 1 and 5/0/3 in game 2, including doubling the next best damage dealt to champions in the game.

Then against Kingzone DragonX, Tempt popped off to the tune of 4/0/6 on Yasuo and 7/0/5 on Leblanc. The numbers are great of course, but so is the champion variety he displayed over the 4 games. Yasuo, Leblanc, and Zoe all have distinct play styles and that allows Hanwha Life so much flexibility in their drafts.

Although in a smaller sample size than other mids, Tempt has been up there with the best in his 8 games. His KDA of 8.63 is dwarfed by Chovy’s otherworldly 30.83 but is still almost double that of 3rd place. His gold per minute and kill share are both 2nd among mid laners in the LCK. Tempt is another guy who is generating big gold leads for himself and converting them into kills for his team.

It’s too early to say that Hanwha Life are a threat to the top 3 in the LCK, but Tempt may have unlocked a higher ceiling for an already strong playoff team.

Other
Share
Mike Plant
Michael Plant has been playing League of Legends since 2010 and analyzing it nearly as long. More recently, he's been interested in the developing PUBG and Fortnite scenes. When he's not playing or watching video games, he's more than likely following one of his Houston sports teams.