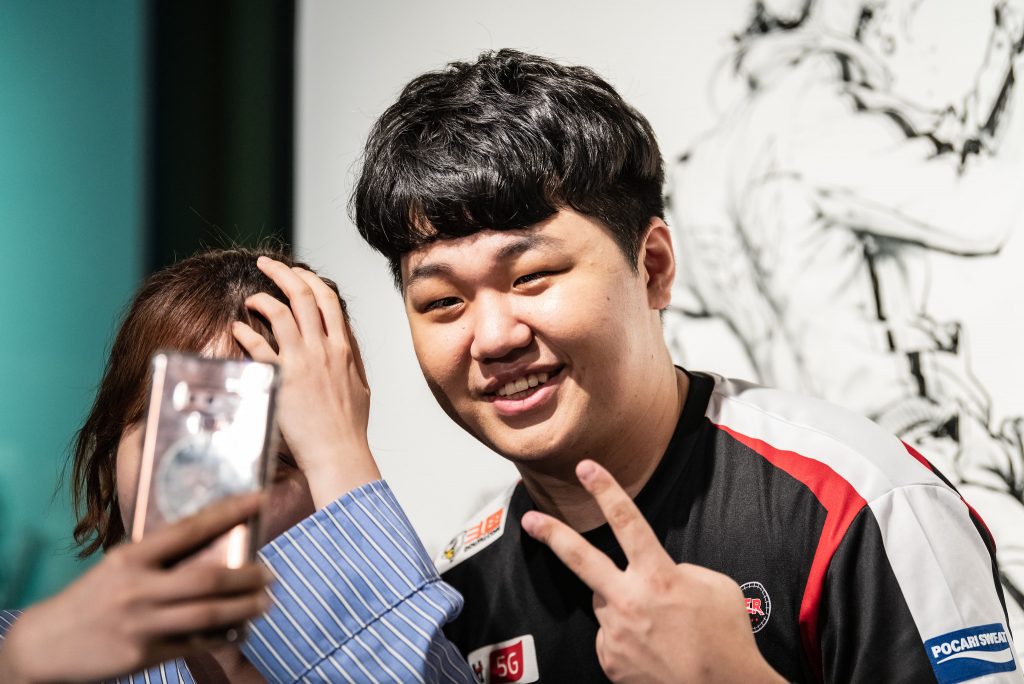 KT Rolster have edged away from the drop-zone with their first win since Week 2. Image via Riot Korea.

As the battle at the top of League of Legends Champions Korea continues to swirl, a series of critical matches for the relegation-bound organizations has split KT Rolster and Hanwha Life Esports. Can KT keep themselves from dropping into the bottom two again? We take a closer look at the battles at the top and the bottom of the standings in this week’s wrap of LCK 2019 Summer’s sixth round.

The job isn’t done yet, but KT Rolster has been given a sniff of life above the relegation zone with a 2-1 win over Afreeca Freecs in Round 6.

Gwak “BDD” Bo-seong on late-game mage Azir was a driving force for the confidence-boosting win. He finished 6/0/5 in the 15-0 victory and dealt 12.7k damage to champions. The mid laner’s quadra-kill just put the icing on the cake.

Kim “Kiin” Gi-in Afreeca responded with a huge 4/2/13 performance on pocket pick Kled, while Kim “Aiming” Ha-ram broke open the late game in the 35-minute contest with a 13/1/7 scoreline on Xayah.

KT polished off the 2-1 win in the third game, coming back from an early 2.5k gold deficit to close out the 7-6 final meeting in the 44th minute.

Hwang “Kingen” Seong-hoon, who had taken to the top lane over solo lane commander Song “Smeb” Kyung-ho for the first time since Week 2, proved the difference on Neeko.

His split-push focus with the Curious Chameleon stretched Afreeca thin before a double stun in the deciding skirmish sealed the deal for KT.

With Eom “UmTi” Seong-hyeon also subbing in over Score, the path forward for KT may be clear. Both Kingen and UmTi impressed over the team’s top-side veterans.

With PraY in the bot lane and rumours that Kang “GorillA” Beom-hyun could be returning to the LCK, KT may already have their leadership core in the bot lane. Combine that with the young talents that proved their worth against Afreeca, and KT may avoid relegation yet.

Hanwha Life Esports have looked lost on the Rift in Summer, and are in danger of relegation. Image via Riot Korea.

Outside of a first-week 2-0 victory over a KT roster bereft of luck, Hanwha Life Esports has been trapped in the doldrums of summer. Not even recent roster changes have saved the plummeting HLE team in their potentially doomed campaign.

A sweep over Jin Air Green Wings in Week 3 of the season – an expected result considering how poor JAG has been – is all that has kept the team from falling straight to the bottom of the ladder. For now, it seems like the LCK has found its two relegation candidates.

It’s not like the writing wasn’t on the wall for Hanwha heading into the split either. The side had finished 9-9 in Spring in sixth place above Gen.G, Afreeca Freecs and KT Rolster, but made barely any changes to their roster.

While the host of teams trapped beneath them last split seemed to improve – from KT signing Kim “PraY” Jong-in, to Afreeca focusing their roster’s plans around soaring jungler Lee “Dread” Jin-hyeok, everyone else improved.

Now Hanwha is suffering the consequences of a roster stacked with bottom-tier talent.

The first-game win over Sandbox provided hope on Sunday evening, but bonO was out-paced in the jungle in games two and three as Kim “OnFleek” Jang-gyeom turned out two MVP performances in a row.

Many would say that HLE needs to make changes. The problem is, Hanwha has already pulled the trigger on key player swaps. For the most part, they haven’t helped.

Kang “Tempt” Myung-gu has come in over Kim “Lava” Tae-hoon, who already suffered sixteen game defeats this season. Tempt has not had many games, but already he’s shown he can play above Lava’s dipping 2.92 KDA. This is the best change they’ve made.

A return of LMS recruit Kim “Moojin” Moo-jin in the jungle doesn’t offer many alternatives. The 24-year-old is 0-5 in games played in Summer. Top lane backbencher Park “Thal” Kwon-hyuk was also hooked after an eight-game losing streak.

For now, Hanwha looks for all the world like the drop-candidates in Summer. Having swapped out poor performers for more struggling players, it will take a lot to surge HLE back up the standings, and into contention for a slot in LCK Spring 2020.

Gen.G have won four series straight in the back half of LCK 2019 Summer. Image via Riot Korea.

Gen.G Turns On the Scorching Heat of Summer

When it comes to crunch time, there aren’t many that step up to the plate better than Gen.G’s veteran roster.

Many of the world champions that lifted the Summoner’s Cup in 2017 have moved on, but Samsung stalwarts Lee “CuVee” Seong-jin and Park “Ruler” Jae-hyuk still remain, and with them seems to have stuck the Summer magic of the team.

Gen.G looked all the world like they were dead and buried this year. An appalling Worlds group stage last year seemed to have shattered their resolve, and high-profile signings like Han “Peanut” Wang-ho and Song “Fly” Yong-jun had failed to fire in 2019.

But, of course, there’s nothing that is going to stop the magic of Gen.G.

The team clocked up another 2-0 round, this time with wins over pacesetters Sandbox Gaming, and Kim “Deft” Hyuk-kyu-led Kingzone DragonX. If you want a statement of intent from any team, these were the two form teams to bowl over.

As it is, it’s hard to pick which speaks louder of Gen.G’s resurgence. The 2-1 series against Kingzone was gritty, long, and forced the winners to claw back to straight wins after dropping 1-0 in just 28 minutes.

On the other hand, a clean 2-0 sweep over Sandbox, with one epic 48-minute contest followed by a 13-3 win in just 24 minutes, may be an even more impressive result. Sandbox is the organization that had lost just twice coming into the Thursday evening clash.

Only Damwon and Kingzone – both title contenders – had managed it before.

There’s only one team in the competition with a better win-streak than Gen.G – SK Telecom T1. With that struggling roster still caught at 6-5 after five straight victories, Gen.G’s rapid rise to fourth, and equal on wins with second and third, seems all the more impressive.

Read Also: Gen.G: The Roster That

Refuses to Miss the World Championship

Game of the Week: Damwon Gaming vs Sandbox Gaming

With the battle at the top still so tight from Sandbox (9-3) to fifth-placed Griffin (7-4), the potential three-game series between Damwon and Sandbox could have league-shattering ramifications for the title race. Both teams bounced back from early-week defeats with wins late on in Round 6, setting up an interesting clash on Friday evening.