Gen.G: The Roster That Refuses to Miss the World Championship 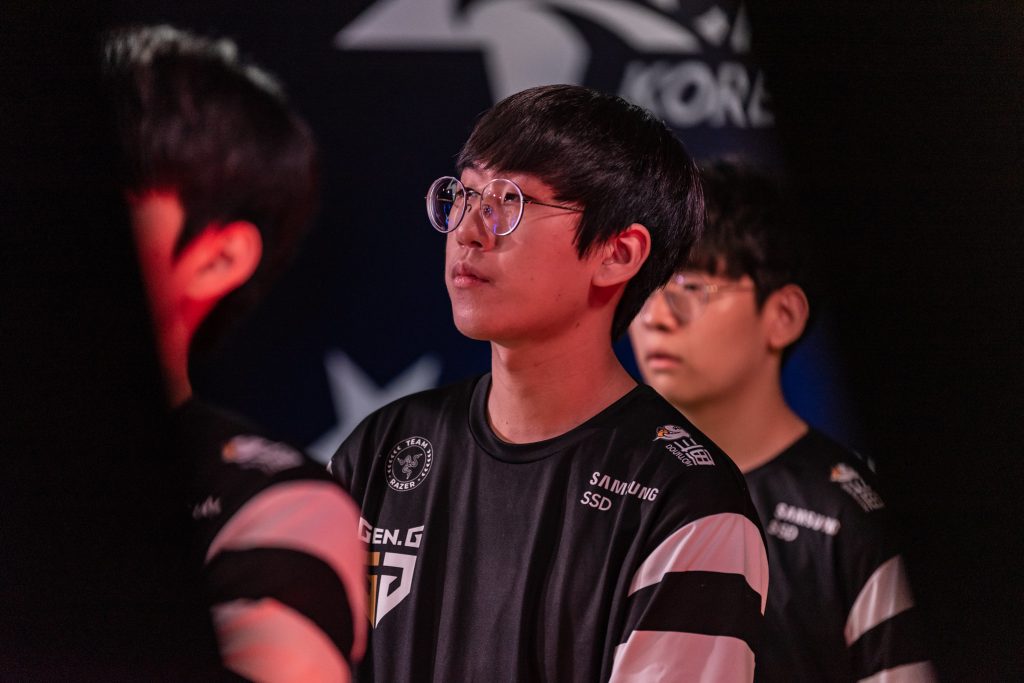 Gen.G have defeated two of the LCK title favorites in their post-Rift Rivals winning streak. Image via Riot Korea.

There is nothing quite like the end-of-year buff that Gen.G gets once the Korean Regional Gauntlet appears on the horizon. The organization, known as Samsung Galaxy when they claimed their world title in 2017, have played at the past three League of Legends Worlds in a row.

For major regions, there are three ways to earn attendance to Riot Games’ season-ending international tournaments. Either be crowned champions of the LCK Summer split, bank enough Championship points to clinch qualification or battle your way through a multi-team, sudden-death gauntlet to score your region’s third seed.

In all three of their qualifications from 2016 to 2018, two of which would lead to them marching to the World Championship grand final, Gen.G’s core roster faced the LCK’s stacked regional gauntlet and survived.

Their first two runs through the gauntlet were impressive, but not awe-inspiring. In 2016, Samsung Galaxy ousted Afreeca Freecs 3-1, then confirmed their place on the global stage in a five-game series against LCK darlings KT Rolster.

The next year, a 3-2 victory over Afreeca followed by a more dominant 3-0 over KT gave them the same results. That was the campaign that saw Samsung clean sweep SK Telecom T1 in the Bird’s Nest in Beijing.

Following the roster of Lee “CuVee” Seong-jin, Kang “Ambition” Chan-yong, Lee “Crown” Min-ho, Park “Ruler” Jae-hyuk, and Jo “CoreJJ” Yong-in claiming their championship rings, their organization changed. Their Samsung banner became NA-based Gen.G, and it seemed like a new history was being written for the team.

Then, of course, the regional gauntlet three-peat happened. Two years in a row Samsung had defeated Afreeca and KT on their way to qualification. This time, Gen.G was going to do one better against arguably an even more stacked gauntlet.

When Gen.G was Samsung Galaxy, the star-studded roster ruled the world. Image via Riot Games.

First, it was the Worlds grand final rematch against SKT. Gen.G cleared that hurdle in a 3-2 epic that saw CuVee take control of Gangplank in the decider.

After the five-game series against one of the world’s best rosters, no one expected them to have anything left in the tank – especially not against the rising stars of Griffin.

So, just like clockwork, Gen.G shocked fans across the world again. Once again it took five games to complete the victory, but the world championship roster clinched a 3-2 win over the young team that many had expected to win the LCK overall.

In comparison, Gen.G’s final 3-0 win over a Kim “PraY” Jong-in and Kang “GorillA” Beom-hyun led Kingzone DragonX roster seemed all too easy. Against every odd, and with matches against three of Korea’s best teams, Gen.G had made it to Worlds once more.

Then, in 2019, the team lost Ambition, Crown, and CoreJJ. Their veteran jungler retired, content with the championship ring he had earned in 2017, while Crown and CoreJJ joined OpTic Gaming and Team Liquid in the LCS for new challenges.

A horrid Spring awaited the new-look Gen.G lineup as major signings Han “Peanut” Wang-ho and Song “Fly” Yong-jun failed to fire in the regular season. The organization ran to a measly 5-13 record and were closer to a relegation scrap than playoffs.

Finally, in 2019, the miracle of Gen.G and Samsung’s regional gauntlet seemed over.

Except, apparently, that magic still remains.

The team boasted a mixed start to Summer, collecting two 1-1 weeks in a row before a 2-0 round with wins against Hanwha Life Esports and Afreeca moved them into mid-table.

Defeats to Sandbox Gaming and SKT the very next week undid that good work. Gen.G were shot straight back to a 4-4 record. A mediocre score-mark for 2019 overall seemed to be the destiny of CuVee, Ruler, and the rest of the team.

Gen.G top laner Lee “CuVee” Seong-jin has been a staple part of the team’s roster since 2014. Image via Riot Korea

Then, the 2-0 win against Griffin in Week 5 was a surprise. A 2-0 in the same round against Hanwha, more expected. The dominant victory over first-placed Sandbox Gaming, followed by a 2-1 reverse sweep against Kingzone this weekend? That’s a statement.

“[These games] were an opportunity to prove myself, and the team, an opportunity after such a long time,” mid laner Fly said after the squad’s win over Griffin. “We were able to defeat Griffin in the way we usually did, our match went as expected. I was quite glad.

“When we get on stage [against Griffin], our concentration tends to improve. It helps that we have experience in beating them in the past.”

Experience seems to be the key for the roster. Ruler joined Samsung in May 2016, and remained loyal through the championship run, the KSV Esports season, and now Gen.G. CuVee has even more history and is now in his fifth year with the team.

Beyond the old heads in those two, loveable jungler Peanut also brings a wealth of experience. A three-time LCK champion, Peanut first rose to fame with fan-favorites the KOO Tigers and bedded in his notoriety at the 2016 World Championship.

Now that Peanut of old – potentially washed out after his stint on SKT – seems to have re-emerged. He’s been dominant, masterfully piloting Sejuani four times in a row against Griffin and Hanwha. He’s been so good, fans have given him a nickname: ‘The God Peanut’.

The 21-year-old star isn’t complaining about that branding either.

“No attention is dissatisfying, I’m actually really happy that people made that nickname for me,” the Gen.G jungler said after the team locked their 2-0 win over Sandbox. “It’s going to be a positive nickname for me for as long as I can perform really well. I like that nickname.”

Peanut, who has faced his fair share of hardship since leaving the ROX Tigers, also knows Gen.G have potentially struck gold with their new win-streak.

“This is our first winning streak this split, so that feels really special,” he said. “My personal performance, especially in game number one, was okay so I’m really happy. Since we are winning I guess my performance has improved. At least I want to believe so.”

Han “Peanut” Wang-ho has surged into a purple patch of form since the Rift Rivals break. Image via Riot Korea.

Peanut’s form has soared in recent weeks, and returning mid laner Fly feels like he’s in the same boat as his jungler. Together, the two newer recruits for the squad have well and truly come online since the Rift Rivals break.

“My form is pretty solid right now. I’ve been having good results recently. I guess I’m playing on the stage once again because my individual performance is looking decent,” he said.

“I just focused on playing games. It was a tough period for me [on the bench], to be honest. I just focused on getting my head on straight, playing the game as if it’s a do or die. Now as long as the form doesn’t drop again, I think I will continue to make appearances.”

So now it looks like Gen.G are hitting their late-Summer straps a little earlier than normal this year. For the players, the miracles of the past aren’t at the forefront of their minds. For Gen.G, keeping up their performances game to game is all that matters right now.

“[We] have to remember this moment, this form this mental state. I’ll make sure this momentum does not drop but maintain it, and keep showing good performances,” Fly said.

Gen.G face SKT and KT next round. They may not be the biggest challenges after battles against Griffin, Sandbox, and Kingzone, but they’re still old rivals of the former champions. It’s time for Korea, and the world, to fix their eyes on Gen.G.

The slumbering regional gauntlet champions may have awoken early. With wins next round they could move to a 6-0 record in the middle of the season. Their gauntlet buff may have arrived early, right on time for an undefeated run.

If they have, Korea beware.