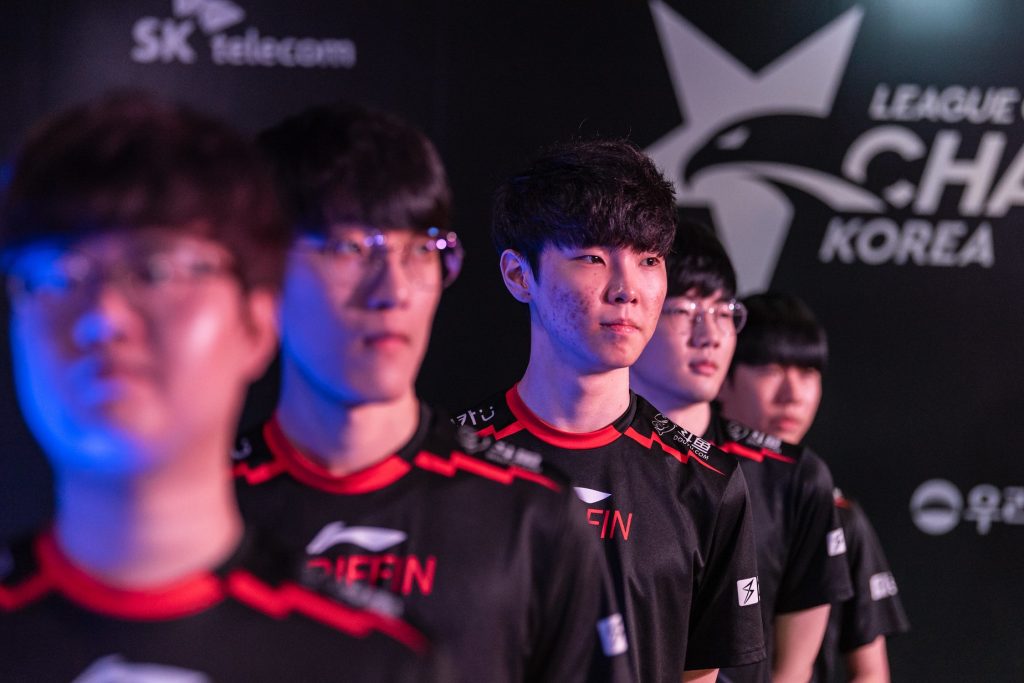 Griffin sits atop the standings in Korea after the opening three weeks. Image via Riot Korea.

Week 3 of the LCK Summer split has seen a small “changing of the guard” moment for the League as a whole. While it’s been clear for some time now that Griffin, and to a lesser extent Damwon Gaming and Sandbox Gaming, have drawn level with or cleared Korea’s best, this round’s results have accentuated just how big that gap may become.

Griffin and Sandbox have taken control of first place with 5-1 records. Three weeks into the LCK, it’s become clear these two rosters are the strongest at the moment, with a handful of chasing contenders not far behind.

For the old guard, the rise of these new squads has been brutal. Not necessarily fatal—unless SKT can’t find a way to recover from their 1-3 start—but old names like KT Rolster and Afreeca Freecs have been bumped down the standings by this new, young blood.

This week put in sharp relief just how strong the new challengers have become in the Korean scene. First Damwon ousted a struggling SKT 2-1 on Thursday, before Griffin rolled over KT 2-0 to keep their hold on first. Sandbox and Damwon 2-1’d Afreeca and Kingzone DragonX respectively. Then Griffin pummeled SKT into ninth place, and Sandbox rounded out the week with a 2-1 victory over resilient BDD-led KT.

Perhaps the changing of the guard that’s currently happening in League of Legends Champions Korea is exactly what the region needs. With Europe soaring into contention as one of the best leagues in the world, and China already having the results to back it up, something has to change for Korea. If that means that their old guard fall away, that may be a small price to pay.

More domestically, however, the question now is can anyone catch the pacesetters? League leaders Griffin scored a 4-0 match record this weekend, and many are assuming they will once again march to the first seed in the gauntlet.

Sandbox is a little more vulnerable. 2-1 results against Afreeca (3-3) and KT (2-4) shows that the young squad isn’t invincible. If a team wants to fight their way into a high-placed seed, knocking over Sandbox would be their easiest path.

SKT have lost five series in a role after their opening 2-1 victory over Jin Air Green Wings in Week 1. Image via Riot Korea.

For a team that has been bumped down to a 1-5 record, a lot of attention has been paid to SK Telecom T1—and for good reason. This is a squad armed with some of the best players to have ever touched League of Legends, not least of all Lee “Faker” Sang-hyeok.

So far in Summer, SKT have defeated cellar-dwelling Jin Air Green Wings (0-6), and even then it took the full three-games to deal with them. Last week I suggested SKT needed to find a way to up the tempo of their games if they were to challenge the best. After another 0-2 round, it’s time to go more simple: SKT need to go back to basics.

Nothing summarises the team’s struggles better than their lack of awareness against Damwon in the deciding game. Jang “Nuguri” Ha-gwon and Kim “Canyon” Geon-bu started up Baron Nashor against the run of play, and SKT only realised once Kim “Khan” Dong-ha dropped a ward into the pit on his way top.

SKT’s stars look lost. Cho “Mata” Se-hyeong is exempt from that, after his benching last round seems to have lit a fire underneath him. The biggest culprits, surprisingly, are Kim “Clid” Tae-min and Faker.

The two heroes of Spring, alongside Park “Teddy” Jin-seong, have simply withdrawn into their shells. Faker scored just 9 kills across 149 minutes of League of Legends this week, and three of those were on mid lane Lulu.

It may be sacrilege to suggest, but Faker needs a jolt. There was public outcry when he was hooked for Kim “Gori” Tae-woo, but hopefully being benched sees him have a similar reaction to Mata earlier this season. If Faker can fire on all cylinders again, SKT may have a chance.

Despite boasting multiple world champions, Gen.G may fly under the radar in LCK 2019 Summer. Image via Riot Korea.

Are Gen.G quiet contenders in Summer?

Another of the old guard to lose favor as the young teams have climbed to power, Gen.G is in an interesting place in Korea. It’s not that world champions like Lee “CuVee” Seong-jin and Park “Ruler” Jae-hyuk have necessarily fallen off in talent.

It’s more just that Gen.G has been along for the ride in 2019. The org fell far short of expectations at the 2018 World Championship and suffered perhaps the most humiliating exit of any Korean representative in the past eight seasons. Since then, they just haven’t been up to scratch with the rest of the fast-paced orgs that have taken over the LCK.

After finishing seventh in Spring, Gen.G have had an uptick of fortune, however. They now sit in fourth place, equal with much-praised Kingzone and Damwon. A 2-1 victory over Hanwha Life Esports was quickly backed up by a 2-0 over Afreeca, and Gen.G may become a surprise package in the Korean campaign in Summer.

It’s a funny place to be for a squad that boasts multiple world champions from just eighteen months ago. It may be just where Gen.G wants to be though.

If teams are focusing on knocking over Griffin, Kingzone, Sandbox, and Damwon, the roster led by Ruler and CuVee may just have a chance to poach a gauntlet spot. From there, who knows what the roster can achieve in the best-of-five formats on the road to the crown.

Game of the Week: SK Telecom T1 vs KT Rolster

Neither side of the Telecom Wars has had a particularly good start to their Summer splits, that’s for sure. Both teams have scored just three wins between their ten games played, and just eleven of the 31 maps played have fallen in their favor.

Despite that, the battle between SKT and KT throws form out the window. It’s a rivalry that has defined competitive LoL for as long as it has been contested, and beyond that in other titles, and this may be one of the last times the match plays out in the LCK as SKT moves to rebrand in the coming months. With both teams desperate for a kickstart to their season, a victory over their old rivals may be just the spark either team needs.