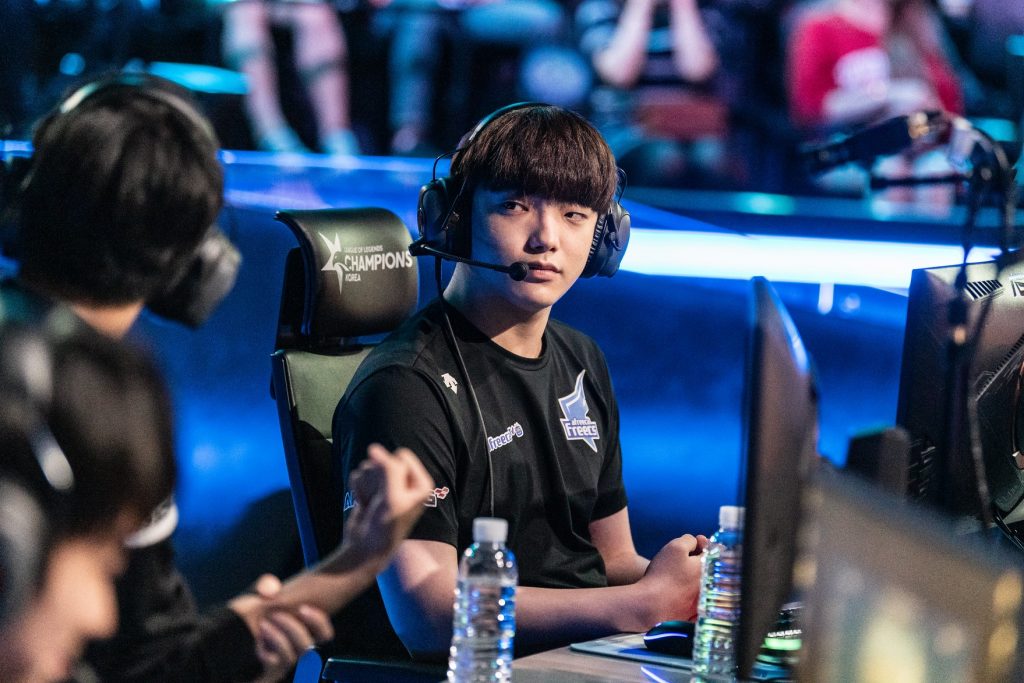 Lee “Dread” Jin-hyeok has been the lynchpin of Afreeca Freecs’ 3-1 start in Summer. His performances have already earned him 400 MVP points in just 11 games. (Image via Riot Korea.)

Week 2 of the LCK Summer Split has been led by surprise package Afreeca Freecs. After a torrid Spring campaign that barely saw the old guard avoid the relegation tournament, Afreeca have come to play, led by potential MVP candidate Lee “Dread” Jin-hyeok. Let’s look at the top storylines from the second round of matches so far in Korea.

Last round it looked like the Kingzone DragonX’s battle against SK Telecom T1 was going to be a defining clash for the top of the table. As it turns out, KZ should have been more wary of their Saturday match against Afreeca Freecs.

After jungler Dread led the way against SKT in their 2-1 victory over the defending champions last week, Afreeca’s roaming playmaker combined with top laner Kim “Kiin” Gi-in to run over the map in four of the five games the team played this round.

Between them, the top-sided duo collected three of the team’s four MVP awards for their wins. Off these two, Afreeca marched to a 2-0 win over Hanwha Life Esports, before upsetting Kingzone 2-1. Most notably, Dread’s early-game pressure is paying dividends.

Both times Dread scored the MVP points for his outing, he was everywhere. First on Lee Sin in the opening game against HLE, and then on Sejuani in the defining third-game run against KZ to secure the win, Dread recorded 100 percent kill participation by 15 minutes. The early advantage steamrolled into victories both times, and cannoned Afreeca’s jungler into pole position in the MVP race with 400 points.

Still no clear view on KT in Summer

After signing legendary veteran Kim “PraY” Jong-in ahead of Summer, many expected KT to come bursting out of the gates with their star-studded lineup. A win over Jin Air Green Wings got them off the mark fine, but another 1-1 round has left them loitering in fifth after four matches.

While PraY may have a few excuses for why his performances have been pendulums of whether he’s going to well—like his 4/0/5 outing on Kalista against Gen.G, or his 0/4/3 on pocket pick Ashe against Damwon – the others don’t have the luxury of pointing to their short retirement to explain their woeful games.

Top laner Song “Smeb” Kyung-ho especially has been struggling of late. Once considered a top three player in the world as ROX Tigers gunned for a championship title in 2016, Smeb has fallen off in Summer and it’s been difficult to watch. Alongside KT veteran Go “Score” Dong-bin, who has represented the club for seven years, the top side of the map is falling apart for the team in recent games.

That said, that’s not a regular occurrence for KT, and would be a major problem if it was. It’s possible the team is just finding its feet again in Summer, as the squad shifts focus from Jeon “Zenit” Tae-gwon in the bot lane to a new way of playing around PraY.

With stars across the roster like Smeb, Score and Gwak “BDD” Bo-seong, it’s only a matter of time before the team clicks. It’s just a matter of whether it will happen early, and give them a bid for the LCK playoffs, or late, and just in time to save themselves from relegation for the second time in 2019.

They may have been playing two of the stronger teams in 2019 in Kingzone DragonX and Sandbox Gaming, but nobody expected the defending champions to be dealt a 0-2 round just two weeks into the Summer split.

After their shock 2-1 loss to a resurgent Afreeca to close out the first round, SKT have slipped to a three-game losing streak. Just Hanwha Life Esports and the hapless Jin Air Green Wings sit below them in the standings.

So what’s going wrong for the team once regarded as the best in the world? The easy answer for this is Kim “Khan” Dong-ha, who recorded a 0/4/0 performance on Kennen in the deciding game against KZ in Day 7, before delivering two invisible performances against Sandbox in the team’s 2-0 defeat.

There’s a deeper lying problem, however—SKT are trying to play a game that only suits one member of their roster. There’s not much blame to be made for the coaching staff wanting to boost up bot laner Park “Teddy” Jin-seong, but when you have early-game beast Khan waiting in the wings, alongside explosive jungler Kim “Clid” Tae-min and Lee “Faker” Sang-hyeok, it seems a mistake to funnel everything into the late game.

If SKT wants to drag themselves away from the bottom of the table, they first have to drag themselves out of the mentality that earned them three world championships in four years. The meta has moved on from their paced control style, and if the team doesn’t adapt then they’ll be outdated soon enough. They may have already reached that stage.

Game of the Week: Sandbox Gaming vs Afreeca Freecs

After slow starts to Summer, both Sandbox and Afreeca roared to life in the second round with 2-0 records against major teams. While Sandbox scalped Griffin and SKT, Afreeca bowled over KZ. Now the two rosters come face to face in the third round, and we get our first opportunity to see where these two teams land compared to each other.