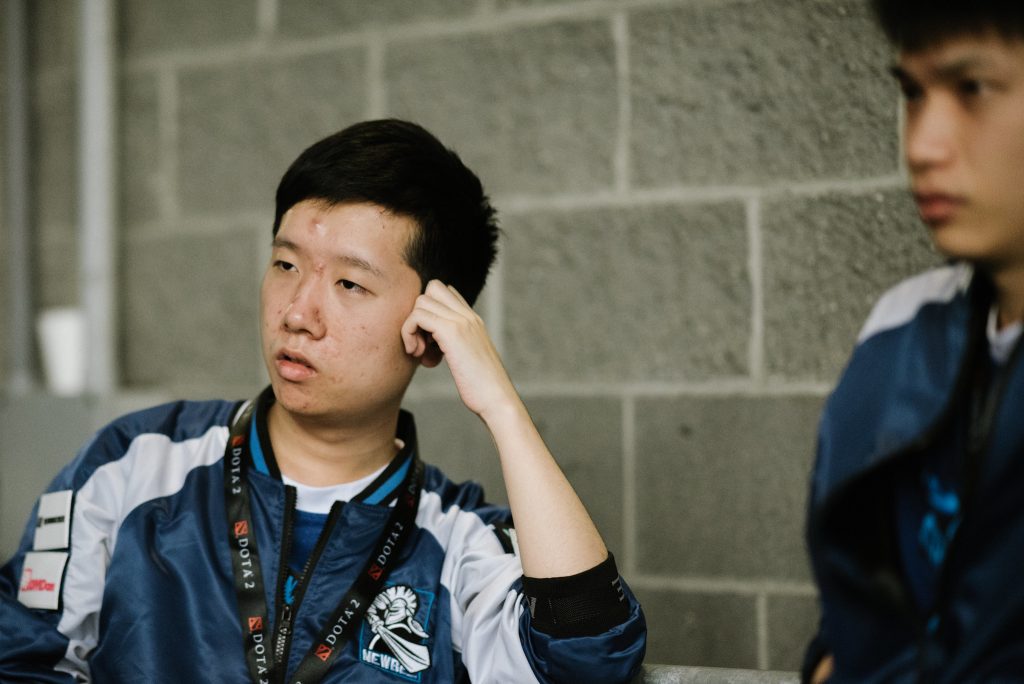 Newbee are on the rise at ESL One, putting the rest of the league on notice. (Photo courtesy Valve)

The penultimate day of Chinese division group stage games at ESL One Los Angeles has come to a close, and with it the first team has been mathematically eliminated from the tournament.

We’re referring to Invictus Gaming, who took their fourth 0-2 loss of the event at the hands of ViCi Gaming. With only one best of three series left available to them, this means that iG no longer have a chance at making the playoffs due to their map score.

Not So Unconquerable Souls

The first of their two games was heartbreaking, to say the least. Although their laning stage was a near-complete success, VG was able to hold on and take key teamfight victories that kept iG’s advantage from ballooning out of control. A one for five trade in VG’s favor going into the midgame marked the first of these successful skirmishes, allowing them to stay in the game in spite of the bad start.

Meanwhile, Zhang “Eurus” Chengjun continued to snowball as Slark, getting his key items at just the right time. Disaster then struck iG at the 42 minute mark, when they were wiped by VG at no cost whatsoever. The gold lead immediately swung towards VG’s side as a result, and they were unable to recover since then. Score one for Vici Gaming.

VG then proceeded to demolish iG in the second game, removing any hopes of them ever getting back into the series. Once again, their cores Eurus and Zeng “Ori” Jiaoyang led the charge, dishing out tons of pain as Mars and Death Prophet respectively. Curiously, it was Eurus that played mid this time, leaving Ori to take the safe lane alongside Ding “Dy” Cong’s Shadow Demon.

Given how smoothly their laning stage went, it was VG’s game to lose from the get-go. The sheer sustain from their supports and the durability of their cores helped them run over iG like a freight train, ending the game with a net worth lead of 22,000 gold.

This abysmal result marks the worst finish for them at any event since the DreamLeague Season 13 Leipzig Major, where they placed a very respectable sixth. It would seem that they have a lot of homework to do with regards to the current metagame, or similar outcomes will be in line for them in the near future.

Knights on the Move

Newbee, on the other hand, did quite well fending off PSG.LGD Gaming, putting them away in three games to improve their record to seven wins and three losses in maps. It is pretty safe to say that they are really locked in now after settling into their groove on Monday, and are now a real, serious threat.

WHAT A TEAM FIGHT FOR @LGDgaming 😱

Their first outing against LGD wasn’t what they had hoped it would be, but they managed to keep it reasonably close up until the end. Both Xu “Moogy” Han and Yan “Waixi” Chao performed admirably as Nature’s Prophet and Shadow Demon respectively, helping their teammates win large engagements when it mattered.

Unfortunately, LGD’s better late game draft won out in the end—particularly after a five for nothing teamwipe going their way at around 39 minutes. With the numbers advantage on their side, they were able to push several objectives, putting the game out of Newbee’s reach.

Newbee called game after another teamfight went south for them, conceding the victory to LGD after the 43 minute mark.

Putting the Game 1 loss behind them, Newbee dug deep into their bag of tricks for the second round. A last pick Broodmother caught LGD completely off guard, forcing them to put Ren “eLeVeN” Yangwei in the middle lane as Timbersaw rather than Lu “Somnus丶M” Yao, who was playing Windranger.

Amazingly enough, LGD actually held a lead as large as 9,500 gold through the mid game despite taking heavy teamfight losses. Of course, this didn’t mean a whole lot, considering that both of their supports were dirt poor during this time compared to Newbee’s. This is exactly what allowed Newbee to stay even with them, along with leveraging their Broodmother pick to quickly take objectives and exert control over the map. And once Wen “Wizard” Lipeng got his Orchid Malevolence and Scythe of Vyse, it was their time to go. LGD crumbled in the face of Newbee’s cores, and had to surrender after 37 minutes of play.

Newbee then decided that they had had enough in the third game, drafting Yin “Aq” Rui’s signature Morphling to put the series away once and for all.

The pick worked to perfection, and Aq rampaged his way through LGD’s lineup for a flawless 14-0 performance. The victory was never in doubt for Newbee in Game 3, and the 28-7 scoreline after just 24 minutes of game time proves this.

Newbee are looking scarier and scarier as this event goes on, and are likely to only get better from here on out. Tomorrow, they will face their toughest test yet: first placers Royal Never Give Up.

Be sure to tune into the ESL Dota 2 Twitch channel tomorrow to see the epic showdown between those two and more. And as always, check out our ongoing coverage of ESL One Los Angeles right here at Hotspawn!