Newbee and RNG Sweep; LGD Triumph at ESL One 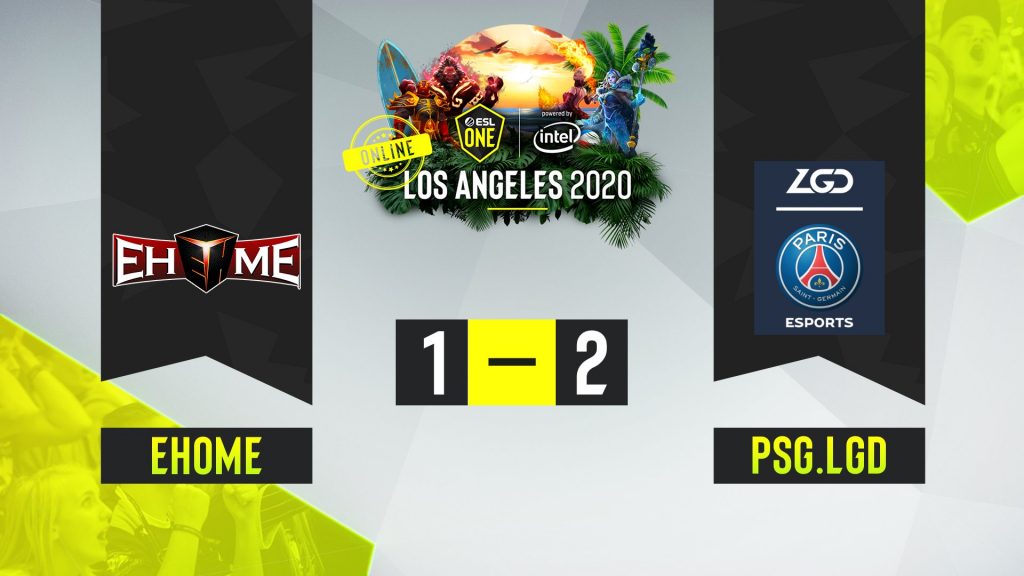 LGD redeemed themselves for their losses on the first day. (Photo courtesy ESL)

ESL One Los Angeles’ Chinese division continues to chug along. The second day of competition saw a few more lopsided results than the first, with Newbee and Royal Never Give up both sweeping their series versus Invictus Gaming and ViCi Gaming respectively.

PSG.LGD Gaming, on the other hand, scored a victory over EHOME in a hard-fought series, only being able to relax by the third game. This match in particular was one of the most gripping seen so far in the tournament, and was a treat for fans of Chinese Dota and just the game in general.

It’s no secret that Newbee have lost the glory that the organization once carried, particularly during their time as one of the grand finalists at The International 7. They’ve gone through many roster changes since then, with only Xu “Moogy” Han and Zeng “Faith” Hongda remaining from their TI7 roster.

It was thus probably a huge relief for them to secure a 2-0 victory over iG earlier today, likely boosting their confidence by a pretty decent amount. Their first outing Sunday saw them absolutely annihilating their opponents right out of the gates, holding iG to just seven kills while scoring 27 themselves.

A perfect team wipe from @newbeecn as they seem to be in control of the first game! #ESLOne
📺 https://t.co/ZqBuyg2042 pic.twitter.com/udWD5jhFQ1

Their primary cores, Moogy and Yin “Aq” Rui styled, all over iG with the former balling out on Nature’s Prophet and the latter putting on a clinic as mid Morphling. The game was out of iG’s reach by the 20 minute mark, after they got teamwiped by Newbee without losing a single hero.

The second round between these two teams was a lot closer than the first, with both squads ending up with almost identical kill scores. iG’s Zhou “Emo” Yi did particularly well as Ember Spirit, which is impressive considering his lane opponent was Aq on Templar Assassin. He ended the game with 11 kills, helping his team stay on even footing with Newbee.

Alas, the game turned on its head during the final two minutes or so, with both Moogy and Aq coming in strong once again. Their combined strength was just too much for iG to handle, with the losing team’s own cores being far behind Moogy and Aq in terms of net worth. This translated to an easy teamfight win for Newbee near iG’s base, which finally forced them to surrender.

This result puts Newbee in second place in the standings, up from where they were after the first day. Not bad for a team that lost to EHOME to start the tournament—though it’s clear that iG is the weakest team at this event. Newbee must not rest on their laurels, for they have tougher opponents to face Monday.

RNG’s 2-0 victory over ViCi Gaming Sunday proves that they can definitely hang with the best teams in the region, and that their preparation for this event has paid serious dividends. It takes a lot to bring down the juggernaut that is VG—and for the 13th placers on the Dota Pro Circuit standings, this result is all the more notable.

Wonderful start for @rngroyal with a Triple Kill for Setsu and a team wipe so early into the game! #ESLOne

The first game was a complete thrashing. RNG’s mid laner Gao “Setsu” Zhenxiong went hard on Storm Spirit—snowballing out of control in the early game and preventing VG from ever getting off the ground. He also helped his team get a teamwipe before ten minutes had even elapsed, proving just how far ahead RNG were by that point. The game ended just eight minutes after the teamwipe happened.

VG put up a much better fight in the second game, managing to trade blows with RNG through the mid game. Zhang “Eurus” Chengjun and Xiong “Pyw” Jiahan held fast against RNG as Storm Spirit and Rubick respectively, allowing VG to hold a substantial gold lead for a majority of the game.

A solid Anti-Mage game from Monet helped @RNGRoyal secure the late game in their clash against @VICI ! #ESLOne pic.twitter.com/h2jwFZFKIN

That is, of course, until the wunderkind Du “Monet” Peng decided to go absolutely nuclear on Anti-Mage. Farming at the speed of light and dealing obscene amounts of damage in the mid to late game, Monet came away with 22 kills and only one death—truly personifying the term “hard carry” all the way to the end. His predecessors in the role would be proud of such a monstrous performance.

RNG have now completed two days of play without dropping a single map, solidifying their position as the top dogs in the tournament. Should they maintain their momentum over the rest of the group stage, they should find themselves in the winners’ bracket in no time.

LGD are still looking to retake their rightful place as one of the strongest teams in China, and their 2-1 victory over EHOME Sunday certainly puts them in the right direction in this regard. After dropping their series to VG Saturday, this outcome allows them to even up their record so far.

Intelligent drafting by seasoned captain Xu “fy” Linsen was the name of the first game for LGD, as their Alchemist and Bristleback picks put EHOME’s Naga Siren-based gameplan under enormous pressure. Lu “Somnus丶M” Yao and Ren “eLeVeN” Yangwei immediately made good on these selections, running roughshod over EHOME and their late game draft.

Of course, praise also goes to Yang “Chalice” Shenyi, who has proven himself as one of the best Nature’s Prophet players in this patch and in this tournament. He clearly knows the ins and outs of the hero, putting his skill and knowledge on display as he went 10-2 in the first game.

EHOME hit back with a big counterpunch in the second game, executing their gameplan well enough to survive LGD’s strong early and mid game power spikes. Liu “Sylar” Jiajun was almost impossible to contain thanks to his Aghanim’s Scepter, which allowed him to force Chalice’s Monkey King and eLeVeN’s Mars to disengage due to the fear effect from Terror Wave.

PERFECT SUNDER FROM SYLAR! @ehomecn managed to stay in the game against @LGDGaming after an excellent defense! #ESLOne

Some sick Sunders also allowed him to stay perfectly healthy in late game teamfights, leading to instant turnaround situations favoring EHOME. These victories began adding up in the final few minutes of the game, forcing LGD to tap out.

It was then when Somnus丶M decided to put his foot down and dash EHOME’s hopes of mounting a comeback. Despite being constantly harassed by rotations from EHOME’s supports in the middle lane, he farmed like the wind as Templar Assassin and still managed to get his Blink Dagger and Desolator at 16 minutes.

From there, the game was simply over. eLeVeN’s sheer durability on Centaur Warrunner enabled LGD to make use of their powerful mid game timing, constantly running at EHOME’s heroes without a care in the world. EHOME surrendered after just 21 and a half minutes of play, recognizing that their draft had no hope of ever catching back up.

This puts LGD on equal footing with EHOME in the standings, though their work definitely isn’t done yet. They face RNG Monday, which will be a very difficult matchup for them considering RNG’s momentum and morale.

The fight for playoff spots in China continues Monday at ESL One Los Angeles. Check out the action on the official ESL Dota 2 Twitch channel, and follow our ongoing coverage of the event here at Hotspawn.