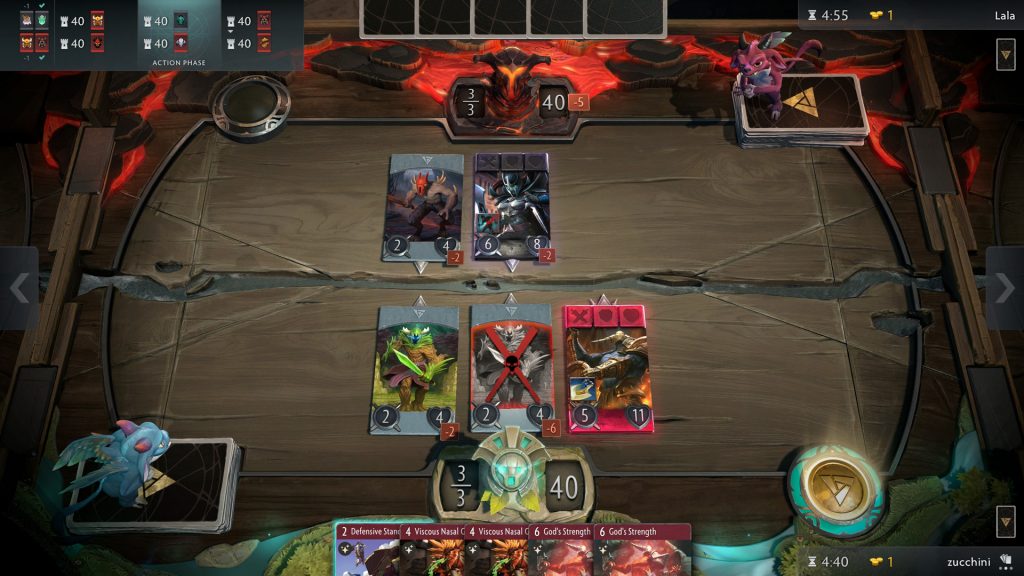 The first Artifact tournament is taking place this weekend, November 10-11, two weeks before the game’s release to the general public.

Billed as “The Artifact Preview Tournament,” the event will be commentated by popular esports studio Beyond the Summit (BTS). The tournament has $10,000 (US) at stake and a pool of 128 players.

The Artifact Preview Tournament, hosted by @BeyondTheSummit, will air on SteamTV November 10-11 at 9AM PST.https://t.co/I0AdgIrx4F

Of course, those 128 players are drawn from the individuals who have received closed, NDA-bound beta keys – a group even more fortunate than those who will participate in the broader beta that begins November 19th. Artifact will be available for the public to purchase on PC via Steam on November 28th.

Consider this an early sneak-peek at competitive Artifact to get potential players excited!

Artifact is a digital card game that takes inspiration from Dota 2 for some mechanics and flavor. It is a collaboration between Valve developers and noted card-game-creator Richard Garfield. Garfield has designed popular games such as Magic: The Gathering and Netrunner, so expectations are high for Artifact and its success.

In Artifact, each player is equipped with a 40-card deck, including five heroes, and a shop inventory of an additional twelve cards. There’ll be a total of 280 core cards and 44 heroes at the time of release, so a sizeable pool. Additionally, you can include up to three copies of the same card in your deck, resulting in many potential different card combinations.

Deck cards and heroes are associated with a color—blue, green, red, and black—that has their own theme. For example, black tends toward high, single target damage, while green is more support-oriented.

Artifact is played across three sections of a game board. Each section is called a “lane,” as in Dota 2.

The objective is to destroy either two of your opponents’ towers (one is located in each lane) or one tower and the “Ancient,” a building with twice as much health as a tower. A player’s Ancient will only be accessible in a lane in which their tower has been destroyed.

When the game starts, three melee creeps for each player are spawned, distributed randomly across the three lanes. At the end of a round (when all three lanes are completed), two additional creeps will spawn, also distributed randomly. The game plays in phases, on a lane-by-lane basis. Play moves to the next lane only once two phases of play are completed in the current lane.

In the first phase, each player takes a turn playing a card in the lane. Cards cost mana, which comes from the pool generated in the specific lane. Additionally, cards can only be played if the player has a hero of the same card color present in the lane. Card playing in the lane continues until both players have confirmed they are done.

When both phases have been completed for all three lanes, there is a final activity before the round ends: shopping. Players can spend gold (typically acquired when the opposing player’s creeps and heroes are killed) to purchase items to, for example, enhance their heroes. After shopping has been finished, cards are drawn, mana is restored, and creeps are spawned. Play begins again in the first lane.

While Artifact gameplay has been demonstrated previously, specifically at PAX West in early September 2018, the Artifact Preview Tournament will be our first look at a truly competitive experience.

Drafts, when players will construct their decks, will take place at the start of each day, with an additional draft on the first day before Swiss Round Four.

Just four days from the @PlayArtifact Preview Tournament where these featured players and casters will be joining us here at the studios! pic.twitter.com/pSK7SdWxmy

Gameplay will be time-restricted, with a four-minute time bank and an extra minute per turn. This does mean that, for new viewers, action will move quickly. Fortunately, BTS will have casters such as Luminous, Fwosh and Swim on hand to narrate and explain the game. Prominent players have also been tapped to help with commentary when they’re not competing in the tournament.

The tournament is sure to stoke enthusiasm for the game heading toward release day. Valve has already announced they will host a $1,000,000 Artifact tournament in 2019, and we may see a future champion competing this weekend!

The Artifact Preview Tournament will begin each day at 9:00 am PT. It will be viewable via steam.tv or BTS’ Artifact Twitch channel.