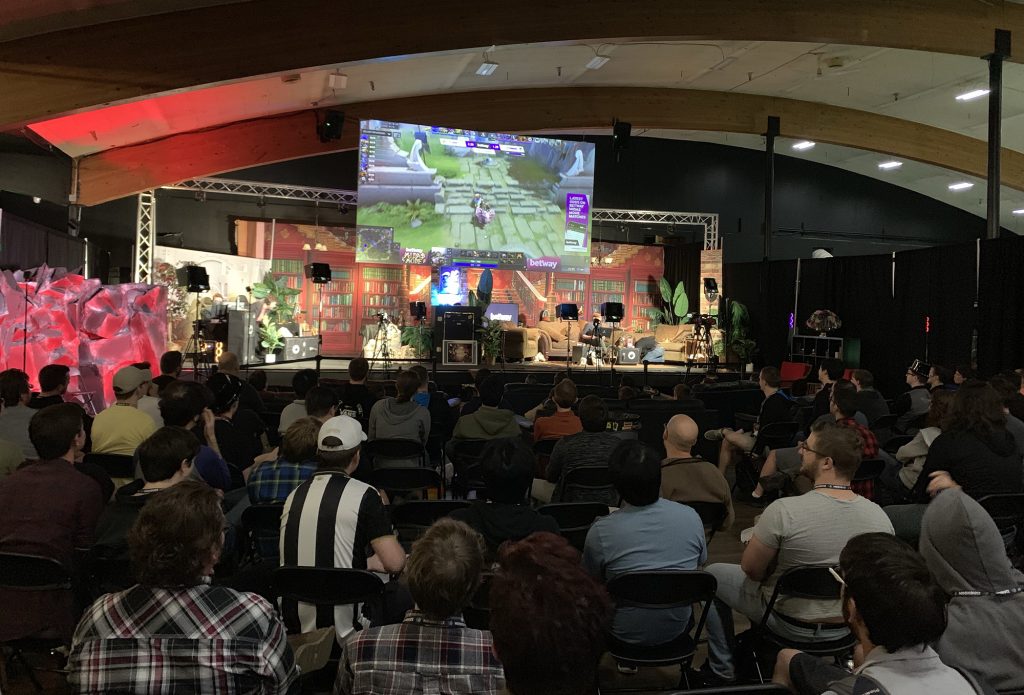 Hotspawn's Heavy Hitters came straight out of this crowd at BETWAY Midas Mode 2.0.

BETWAY Midas Mode 2.0 is all about getting fans involved…and improvisation. What better combination than to have an impromptu five-stack of VIP ticketholders competing in a showmatch to defend the honor of Mr. Midas (or is it Sir Sadim)? They will face a stack from reddit, the Asexual Pringles!

Hotspawn had the opportunity to talk with the five lucky VIPs. Let us introduce you to your fan-representatives, the Hotspawn Heavy Hitters!

Remster joins us from Orlando, Florida. He told us he wanted to come to BETWAY Midas Mode 2.0 because the first Midas Mode was such a blast, when he saw “it was going to be a pseudo-LAN, [he] really wanted to go.” It’s proven to be a great decision for Remster. He told us, “My favorite moment of the event so far has to be participating in the creep takeover with [Topias “Topson” Taavitsainen] when he was using voice to communicate with us on his Dazzle.” That’s something unique to attending Midas Mode, a once-in-a-lifetime experience.

Remster told his favorite hero is [redacted in case the reddit team sees this ahead of the match.]

Remo delighted the Midas Mode audience by donning a custom Dota 2 suit on Wednesday. He was happy to do it: he came from Georgia to Midas Mode because of the community interaction. In his words, “I think it’s one of the most fun tournaments that goes on during the year. People don’t necessarily focus on showcasing the utmost skill necessarily, but that’s what I enjoy. It’s more about having a good time. Because everything throughout the year is so serious, this is just a good time to enjoy and meet people and whatnot.” Remo’s really dug into the event. His favorite moment was, surprisingly, not being on the panel, but instead buying a custom Midas Mode cake for SirActionSlacks and the entire crew as a show of appreciation for all of their hard work.

Remo’s favorite heroes are ones that can transition from support to core or who are ambiguous enough to play in any position.

If you’re a fan of Remo (or maybe want to ask more questions about his suit!), check him out on Twitter.

Kamil “CamelCash007” Basara traveled from Illinois to partake of Midas Mode 2.0. CamelCash007 is a huge supporter of SirActionSlacks and of all the people involved in the event. The minute VIP tickets were available to him, CamelCash007 picked them up. This was well before talent and team announcements. He had faith that with Slacks involved, the ticket would be well worth it. His favorite moment was killing the Team Anvorgesa courier while he was VR Roshan. It was extra sweet because CamelCash007 wanted to support beastcoast. This was just the cherry on the top of VIP experience for him.

CamelCash007 understands the value of a good meme-hero pick, which is all we’ll reveal about his plans for the showmatch.

From San Francisco, California, Mags has come to Midas Mode to show support for the North American scene. He’s already done his part for the community, handing out 2K chat wheel buttons at The International 2017 (how come I didn’t get one???), admin-ing for NADCL and moderating for Jake “SirActionSlacks” Kanner’s Twitch channel. He took care to remind us that there’s been no other NA LANs this year, which is a true shame. So far, he’s enjoyed starring on stream as a Dire range creep who both stacked camps and griefed his pro team. Mags is also happy to see Sir Sadim’s Stunners performing well versus the professionals (we’re not saying Sadim may have played favorites to put Mags on this stack, but…). When it comes to Dota 2, Mags has two rules, “I’ll play any hero any role and hate playing the same hero twice in a row.”

Mags’ favorite support hero and core hero are redacted, but we can say with confidence that both have an entertainment factor for the audience.

The second Californian on the Hotspawn Heavy Hitters, dv0dv0 made his way to Denver, Colorado from San Jose. He is a carry player for the North American stack “Risky Biscuits.” The location of Midas Mode meant dv0dv0 and his teammates could all attend in person. He’s also a huge fan of Moonduck and has greatly enjoyed the (numerous, lengthy) fill panels because they showcase Moonduck’s personality. A close second favorite aspect of the event have been the creep takeovers.

When we asked dv0dv0 about his favorite hero, he told us that [redacted] probably took that honor. He said, “I like heroes that turn seemingly lost fights, baiting the enemies by being low health while still hard to kill.”

These five VIPs will compete against the Asexual Pringles this afternoon, after the North American semifinals match between Team Anvorgesa and the Fighting Pepegas.