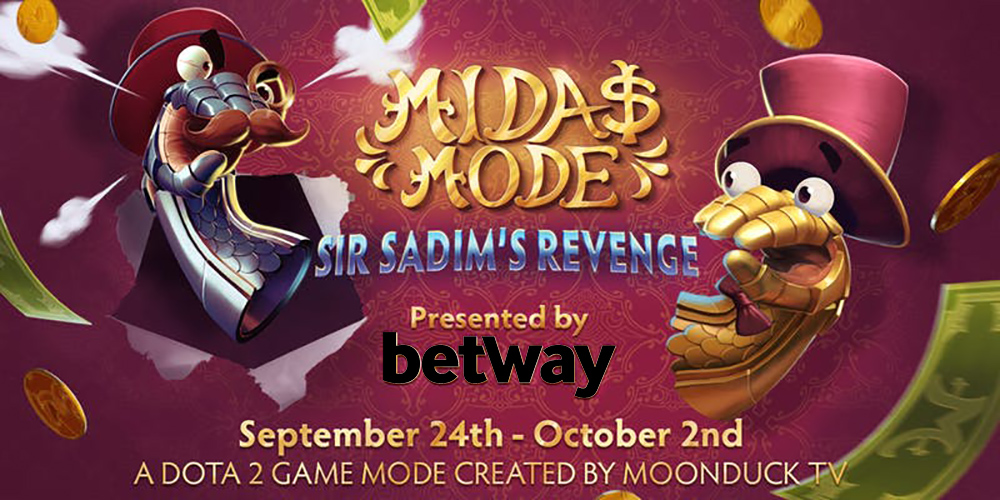 Hotspawn will become the exclusive content provider for all things Midas Mode 2.0.

Hotspawn is proud to officially announce their collaboration with Moonduck Studios on Midas Mode 2.0. Hotspawn will become the official content provider for Midas Mode becoming your home for everything from breaking announcements to exclusive featured content and much more.

Midas Mode is a unique custom Dota game type in which teams are given a certain number of Moonbucks to spend on various things like hero picks and bans, pausing the game and even which side of the map you play on. Teams need to carefully spend their Moonducks to try to ration them throughout the tournament but can earn more by completing bounties.

Bounties can range from pretty simple, like all five players taunting the opponents at once, to incredibly difficult, like picking only melee heroes.

Moonbucks can also be earned from achieving other goals and tasks, which have yet to be officially unveiled.

Fans looking to take in the action in-person are able to purchase tickets to see the event live at the LocalHost Arena. The intimate venue is the perfect place to take in some top-tier Dota action and the only LAN event held in North America in 2019. Not only will the gameplay itself be exciting but there are plenty of interesting ways you can be part of the action.

If you’ve ever wanted to be part of Dota, Moonduck can help with that. In every game during Midas Mode, a fan will be chosen to BE Roshan. By putting on a virtual reality headset, audience members can be a part of the game and maybe even help out their favorite team.

Fans can also help create the bounties for the bounty system by logging onto Reddit each day, finding the thread and suggesting new challenges for the teams.

And this is just the tip of the iceberg. Learn about more ways you can be a part of Midas Mode in the coming weeks!

Hotspawn will also be live in Denver at Midas Mode. You can find us taking in the action, producing top-notch content for the website and maybe even on-air for those of you watching at home.

For those who don’t know all the ins-and-outs of Midas Mode, don’t worry. Hotspawn will be the place to find content explaining the event and the rules but you can also check out the official Midas Mode 2.0 website for more details.

Hotspawn is excited to be partnering with Moonduck Studios to bring the audience the best content possible. Not only does that mean during the event itself, but Hotspawn will also be the place to find all your pre- and post-Midas Mode information in one spot.

If you want up-to-the-minute updates on the most unique and entertaining Dota event of the entire year, be sure to keep your eyes on Hotspawn!

Dota 2 Midas Mode Other
Share
Justin Hartling
Justin has been writing professionally for his entire career with a background in journalism and broadcasting. After writing about what other people wanted for years, Justin came up with the idea for Hotspawn – allowing him to combine his love of writing and of esports.
Follow me