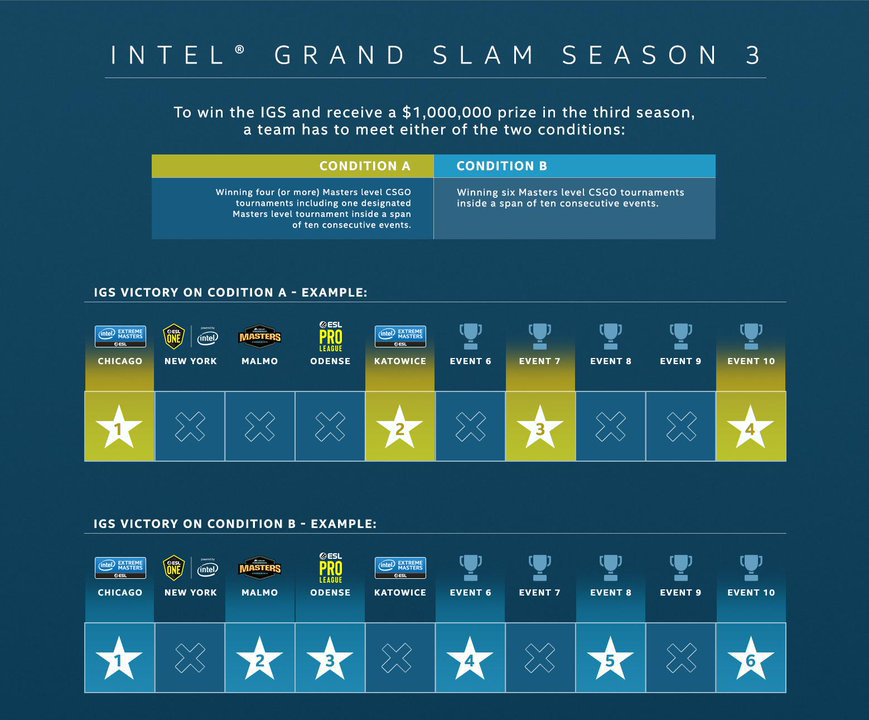 With the change to the Intel Grand Slam, Team Liquid's historic 63-day record will likely never be touched.

The Intel Grand Slam is one of CSGO’s grandest prizes. Starting in 2017, ESL, Intel, and DreamHack partnered together to make a calendar where every one of their major events mattered.

In its very first season of the Intel Grand Slam, Astralis took home $1,000,000 by winning four championships in the span of just nine events. In Season 2, Team Liquid destroyed the competition and won the Intel Grand Slam in just 63 days. This feat will likely be immortalized as the system is changing, preserving the record’s legacy forever. Come the new season starting at IEM Chicago this week, Season 3 will have a new ruleset that changes the ways to win the prize.

🥇 The #IntelGrandSlam Season 3 kicks-off at #IEM Chicago with new conditions to win the coveted $1,000,000 prize!

Season 3 of the Intel Grand Slam will feature two ways of winning the$1,000,000. The first method involves victory through the Intel Extreme Masters Circuit. Currently scheduled are IEM Chicago and IEM Katowice, with two more events to follow. Winning four IEM events in the season is one way of winning the $1,000,000 prize. As for the other win condition, a team can win six Masters level events, spanning across IEM, DreamHack or other ESL tournaments. Both win conditions span across ten tournaments.

A team only needed to win four eligible events in the previous Intel Grand Slam system. With the new changes, it likely means the prize is going to take much longer for any team to claim. Although, one of the big aims of the prize is for a team to win both IEM Katowice and ESL One Cologne. In theory, the next winner of the IGS will have to win ESL’s greatest events – making it that all more special.