Humanoid: “I Know That We Can Beat All The Other Teams” 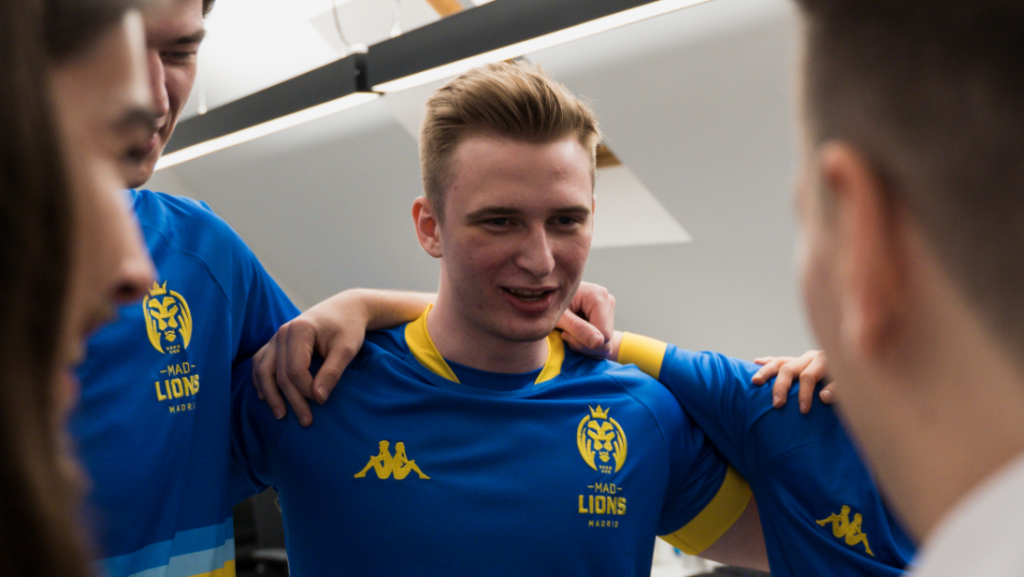 MAD Lions will continue their fight for the Summer Split championship from the lower bracket. (Photo courtesy MAD Lions.)

The LEC Summer Split Playoffs are in full swing. After Schalke 04 kept their miracle run alive with a victory over SK Gaming, it was up to MAD Lions and G2 to determine who would stay in the upper bracket of the tournament and who would be sent down to the lower bracket. While elimination wasn’t on the line, the match was still very much anticipated. In the Spring Split, MAD Lions upset G2 with a 3-2 victory in the first round of those Playoffs, only to be swept by G2 in the revenge match later on.

The rivalry continued this Split, with MAD Lions finishing the regular Split in a higher place than G2. After being unapologetically swiped from Summoner’s Rift in the first game of the Playoffs series, MAD Lions improved in the subsequent games and actually managed to take a game off the reigning champions. However, G2 was simply too strong in the end. After the match, MAD Lions mid laner Marek “Humanoid” Brázda spoke about the preparation for the Playoffs, what went wrong and what went right in the match against G2, and how he and his teammates will prepare to stay alive in the race for the championship title.

Hotspawn: Welcome, Humanoid. Obviously, this was a disappointing loss against G2. But I want to first talk about the preparation you did for this series. What was practice like?

Humanoid: Well, I think during this last week we had a bad read of the meta. So we started to change a lot of things up in the past two days. Then we realized that a lot of champions that we were not playing were actually kind of overpowered, so we started playing them. But we didn’t really have a lot of time to figure out what all the matchups were, and how to use these champions. So we went into this match blindly, kind of. It didn’t always end up being too good because of that, but I think we’re on a good path. For next week, I think we can have it all figured out and have much better results.

Hotspawn: Was there any preparation you guys did in anticipation of G2 specifically?

Humanoid: I don’t think so, no. We just play like we would against any other team. It doesn’t really matter to us that it’s G2.

Hotspawn: In the beginning of the Summer Split, you guys had an advantage because you could play champions nobody else was really playing yet. What was different with this patch?

Humanoid: I think we are playing almost everything now. But we are just not really sure for every champion when we should pick them. We’re not super confident about drafting right now. That’s where it goes wrong for us sometimes. That having said, though, we had good drafts. At least, we had decent drafts against G2, except for maybe the first game. I think the games were definitely winnable, so we can’t blame it all on our draft.

Hotspawn: It seemed like G2 was really trying to focus you, especially in the first game. Had you anticipated this strategy, or were you surprised by it?

Hotspawn: In the games that followed, it seemed like your team tried to push harder back in the mid lane, with Shad0w coming in for early kills. Was this to just keep Caps from having the chance of popping off?

Humanoid: In the second game, we only ganked because we had invaded their jungle and then we wanted to path towards the bot side. It was kind of free in that situation. We did end up messing it up a bit, and it ended up being really bad for us. But I think that, if we had played it a bit better, it would have been really good. In the third game, if you play Galio then it’s pretty easy to gank so that’s why we chose to gank the mid lane more. 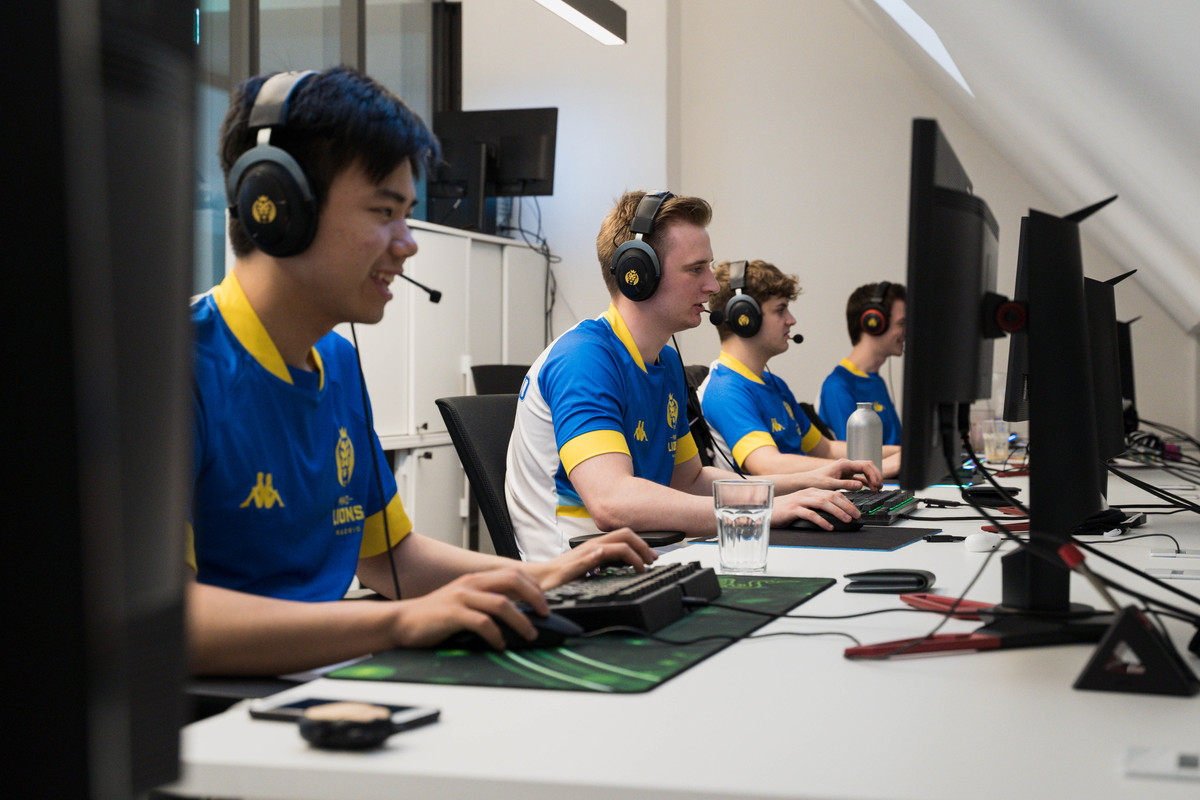 MAD Lions have to step up their game if they want to have a shot at winning this Split. (Photo courtesy MAD Lions.)

Hotspawn: Even though you were down two games, you managed to bounce back strongly in game three. How did you manage to stay level-headed in such a do-or-die situation?

Humanoid: I think none of us were getting tilted after losing a game in a Best of Five series. Mentally we were fine. We were still joking, having fun. I think we were good in that aspect. For game three, we ended up playing Galio and Camille again. It was just really strong. In that game, it kind of carried us to the victory. It’s really hard to play against it when Camille can just Ult on anyone and Galio can follow up with his Ultimate. That’s what we were looking for. G2 picked Syndra into it, which I think is kind of bad, actually. You can’t really do anything. We won the draft hard in the third game, and that’s how we ended up winning the early game.

Hotspawn: When you won the third game, did it give you a mental boost at all?

I know that we can beat all the other teams.

Hotspawn: Let’s also look ahead a bit. You’ll be dropping to the lower bracket, fighting your way up for the Summer Championship title and potentially for your ticket to Worlds. Does this “all or nothing” scenario add pressure for you?

Humanoid: Personally, I don’t really care if we only have one more chance to stay alive. Especially after today. G2 is the best team in the league, probably. All the other teams are far behind, I think, and we played at least three even games against G2. So I know that we can beat all the other teams. For sure. I’m not stressed out about being in the lower bracket.

Hotspawn: You’re a more seasoned player on your team. But what about your teammates? We know you’re a tight team, so do you think they could start feeling the pressure?

Hotspawn: While you don’t know who you’ll be facing—it all depends on who wins between Rogue and Fnatic in the other upper-bracket match—Fnatic and Schalke 04 are two possible future opponents. Do you have any preferred opponent?

Humanoid: I think Fnatic is way better than Schalke 04. If we face Fnatic, then it means that they’ll probably have lost against Rogue. In that case, with how the bracket works, it means that we’ll already have made it to Worlds. So both options are pretty good for us, I would say.

Hotspawn: It’s interesting that you think Fnatic is way better than Schalke 04. Schalke is on a ten-game win streak and, at least to the viewer, looks like one of the strongest teams in recent weeks. Meanwhile, Fnatic has looked shaky all throughout the Split.

Humanoid: Well, I think for teams like Fnatic and G2, it’s always the case that they just play better when it gets to Playoffs. They always perform better than how they did in the regular season. Even though Schalke is on that win streak, I’m not really afraid of them. I don’t think they’re super good. I think they’re decent, and I’m confident that we can win against them easily.

I’m not sure. I didn’t really watch their games too much. *laughs* But I do remember the one where we lost against them. That was the worst week that we have ever played in the LEC, I think. Actually, I’m not sure what Schalke’s weakness is. Maybe they don’t have any. Maybe they are perfect.

Hotspawn: To round off the interview, is there anything you want to say to the people who have been rooting for MAD Lions and stand by you as you head into the next Playoffs matches?

Humanoid: Even though we lost against G2, it doesn’t end here. The next series will be in our favor, I think. We will just stomp everyone else from here.

The next match in the LEC Playoffs will be between Rogue and Fnatic, played on August 23rd at 5:00 p.m. CEST.