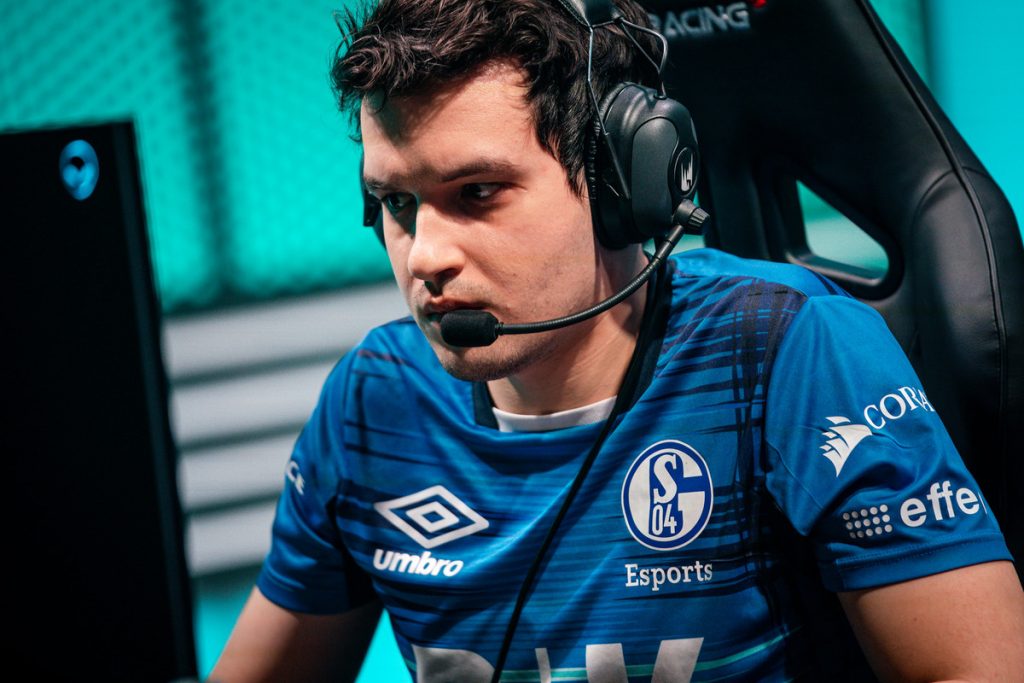 The League of Legends European Championship (LEC) has concluded the eighth and final week of the 2020 Summer Split. FC Schalke 04 pulled off their miracle run, making the playoffs after starting the season 1-10. They will be joined by G2 Esports and Fnatic, who both qualified as well. We take a look at where things stand in the LEC by looking at the top story lines so far in Europe.

FC Schalke 04 started the Summer Split 0-8. With a win over Fnatic in game nine they avoided a winless season, but two more losses put them at 1-10, guaranteeing a losing regular season record. While it’s possible to make the playoffs with a losing record, even that would require S04 winning out and requiring help from other LEC teams to knock off their competitors.

The run started in week six. S04 upset G2 Esports, then followed it up by beating Misfits Gaming. Now at 3-10, they had hope of climbing out of last place in the LEC. Two more wins in week seven, both over teams they would have to jump to get into the playoffs in Excel Esports and Origen, made it so S04 would still be mathematically alive heading into week eight. Still, S04 would have to both win their remaining three games and have either Fnatic or Excel Esports fall out of the picture.

WE DID IT!!! PLAYOFFS BABY! pic.twitter.com/ZlqGYtOxAE

Stunningly, things broke perfectly for S04 and their 3-0 week was enough to secure them the sixth and final playoff spot in Europe. FC Schalke 04 own a seven game winning streak heading into the playoffs, beating Fnatic, Team Vitality, and MAD Lions in the final week. Excel Esports’ losses to Fnatic and G2 Esports dropped them out of the playoff picture, freeing up the final spot for S04.

S04 kicked their weekend off with a dominant 24 kill to 10 win over Fnatic. Felix “Abbedagge” Braun went 7/1/8 on Azir, while Matúš “Neon” Jakubčík’s Ezreal went 8/1/10 and dealt a team-high 23.5k damage. Abbedagge continued his redemption tour in game two against Team Vitality, going a perfect 8/0/8 on Zoe while dealing a game-high 28k damage. Erberk “Gilius” Demir’s Kha’Zix went 7/1/9 in the 20 kill to 5 win in 36 minutes.

Needing one more win to secure playoffs, S04 knocked MAD Lions out of the top playoff spot in the final game of the season. Abbedagge had perhaps his finest performance yet, going 12/1/6 on Corki while dealing a game-high 39.1k damage. Andrei “Odoamne” Pascu had a great weak-side Shen game, going 3/1/13 in the win. S04 won 20 kills to 10 in 35 minutes, then watched G2 Esports send them into the playoffs with a win over Excel Esports.

This is potentially the greatest regular season turnaround in League of Legends esports history. FC Schalke 04 went from being historically bad in the first half of the season to potentially being the best team in Europe as they head into the playoffs. Gilius and Abbedagge have stepped up in a big way, going from one of the worst mid/jungle duos in the league to one of the best. Neon has also been a pleasant surprise in his first full-time role in the LEC, while Han “Dreams” Min-kook has played well with his new partner. Odoamne is the perfect rock-style player to hold down the fort in top lane.

It doesn’t feel like hyperbole to suggest that FC Schalke 04 are the team that nobody wants to face in the LEC right now. As the fifth seed, SK Gaming will be first up to face S04 in the Lower Bracket.

ROGUE ARE FIRST TEAM TO QUALIFY FOR WORLD CHAMPIONSHIP

They may have lost in the first round of the Spring playoffs and have yet to play in the Summer playoffs, but Rogue have become the first team assured of a spot in the 2020 World Championship. This comes courtesy of the LEC’s new qualification system for World Championship berths. Like the LCS, the gauntlet is gone, with all spots being determined by Summer playoff finish. Because of the way the bracket is set up, the first seed cannot finish lower than fourth in the playoffs. With Europe getting four spots this year, that means Rogue are guaranteed to advance, even if they lose every single game they play in the playoffs.

The first team worldwide to qualify for #Worlds2020. #GoRogue pic.twitter.com/jkSvA4raBU

Rogue were at or near the top of the standings for almost all of the season, often neck-and-neck with MAD Lions. The two teams entered week eight tied in the standings at 11-4. Rogue lost their opener to Team Vitality while MAD beat Misfits Gaming, momentarily giving the lead to MAD. However, Rogue then beat MAD in a head-to-head matchup in their second game, pulling them back even. Rogue then took care of Origen in their final game, immediately after MAD lost to new LEC powerhouse FC Schalke 04.

Rogue will open the playoffs as the first seed in the upper bracket. They will face Fnatic in round one.

It was a regular season to forget for Europe’s two premier organizations. G2 and Esports looked lost for most of the Summer Split, alternating flashes of their Spring prowess with baffling losses to bottom tier teams. Both were under .500 late into the season, including the latest that has ever happened to G2 in their history in the LEC. However, even with a combined 20-16 record, both teams have made it into the playoffs. Even better, with their championship points from Spring factored in, both teams have made it into the upper bracket for the Summer playoffs.

G2 Esports had smoother sailing than Fnatic. They were in playoff positioning when they entered week eight and continued to just win. After wins over SK Gaming, Misfits Gaming, and Excel Esports, G2 Esports carry a six game winning streak into the playoffs. Their loss to FC Schalke 04 in week six may have woken them up, even if S04 have taken the LEC by storm. Mid laner Rasmus “Caps” Winther has been playing at an MVP level as Luka “Perkz” Perković continues to work back into shape as an ADC.

Fnatic were not as secure in their standing heading into week eight. At 7-8, Fnatic dropped their opener to a direct playoff competitor in FC Schalke 04. However, Fnatic settled in and bounced back to pick up a win over Excel Esports in game two. G2 Esports’ victory over Excel Esports rendered Fnatic’s final game against SK Gaming moot, but Fnatic still took care of business to end the season at .500 and on a high note. That confidence could be useful, as Gabriël “Bwipo” Rau noted their Summer struggles to our Tom Matthiesen.

Even with down seasons, Fnatic and G2 Esports are still in the upper bracket, so they’ll get multiple chances to make a deep run in the playoffs. Fnatic will open against Rogue, while G2 Esports draw MAD Lions in round one.

On the other side of the playoff picture, Origen and Misfits Gaming were two teams that never looked right at any point in the season and will pay for it by missing the playoffs. Misfits Gaming dropped three of their final four games to miss the playoffs, while Origen will enter the off-season on a seven game losing streak.

Misfits Gaming finished 10-8 in the Spring Split and expected to be better after dropping Ju “Bvoy” Yeong-hoon for Kasper “Kobbe” Kobberup. Unfortunately, the whole team regressed. Starting Mad “Doss” Schwartz over Petr “denyk” Haramach for his synergy with Kobbe was a mistake, as that synergy did not offset the poor macro play that resulted. By the time denyk was re-inserted in week seven, it was too late. Misfits had a brutal week eight schedule, facing MAD Lions and G2 Esports. They finished their season with a win over Team Vitality, but it was too little too late.

Origen will be even more troubled by their Summer Split. After going 13-5 in the Spring and looking every bit one of the top three teams in the league, Origen took a nosedive to 6-12 in the Summer, finishing in last place. This will continue the narrative that Origen fall apart in the Summer. Consider the following splits in Origen’s LEC history:

It will be gravely disappointing for Origen after they acquired two of the top free agent targets in the off-season in Andrei “Xerxe” Dragomir and Elias “Upset” Lipp. Origen tried a mid-season roster swap from Mitchell “Destiny” Shaw to Jakub “Jactroll” Skurzyński, but that provided only temporary results. Origen won their first two games with Jactroll but then dropped their final seven of the season.

Both teams will have a number of decisions to make in the off-season. Danny “Dan Dan” Le Comte’s contract expires for Misfits Gaming, while Barney “Alphari” Morris, Xerxe, and Jactroll will be free agents for Origen. 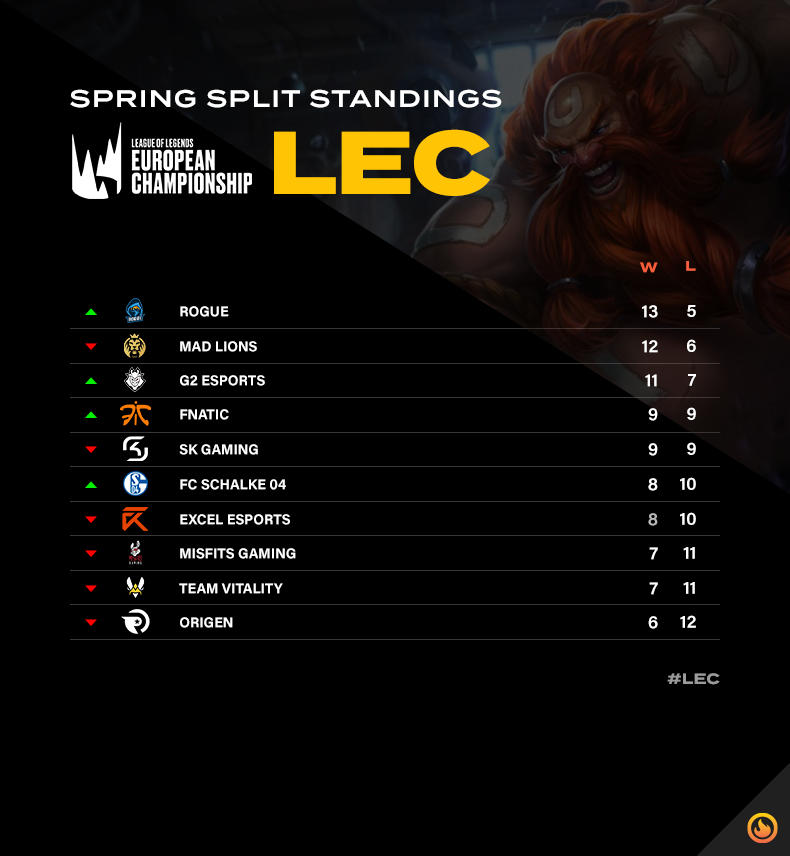 Rogue secured the first seed over MAD Lions, earning themselves an automatic World Championship berth. G2 Esports, Fnatic, and SK Gaming rounded out the top half of the league.

FC Schalke 04 completed their miracle run, winning the final playoff spot over Excel Esports. Spring playoff participants Misfits Gaming and Origen failed to make the playoffs and have had their seasons ended.

The 2020 LEC Summer playoffs will be a double elimination bracket that will see four of the six teams sent to the World Championship. Play kicks off on Friday, August 21st at 9 a.m. PDT between fifth seeded SK Gaming and sixth seeded FC Schalke 04.