How StarCraft Paved The Way For Esports Bars 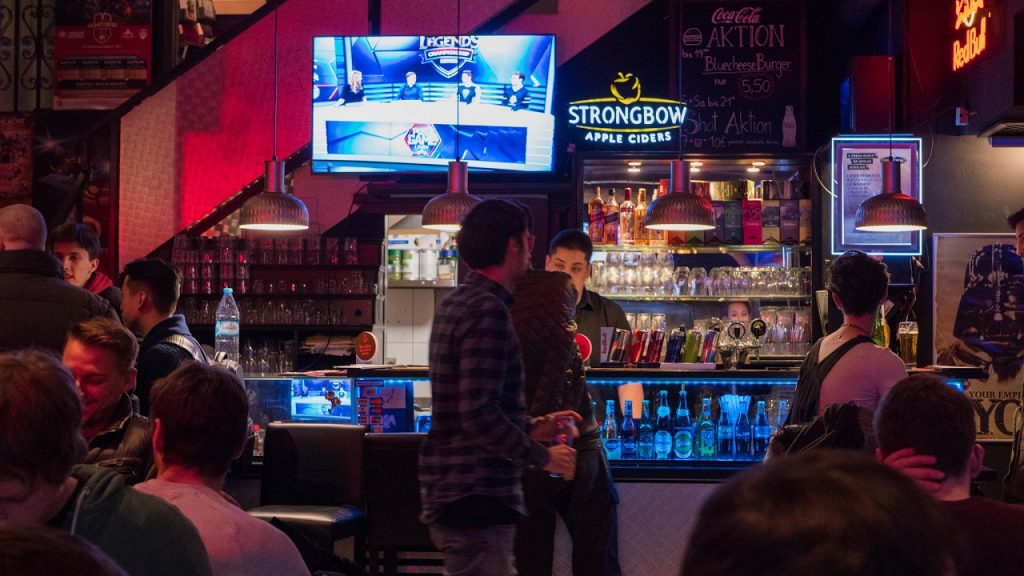 Just like any other sports fan, esports fans like to get together to watch the big game (Photo courtesy of Non-Fiction Gaming)

My introduction to esports came in 2011. I had bought a virtual ticket to Blizzcon, wanting to be there for the latest World of Warcraft announcements. Me and my housemate at the time made a spectacle of it. We hooked a laptop up to the TV, curled up on the sofa and ordered in Chinese food. During a lull in Warcraft content we ended up flipping to the Blizzcon 2011 StarCraft II Invitational, neither of us having any idea that professional gaming was even a thing.

We were hooked instantly.

A week or so later my housemate shuffled into my room with her laptop, wedging herself in at my desk to show me something she had spotted on Facebook. “Wanna go to London? They have this thing called a ‘BarCraft’.” She asked excitedly. I did. So we did.

Born at The Assembly House in Kentish Town, London BarCraft was a relatively small and close-knit group of fans and professionals that quickly became an important fixture in our lives. Whenever there was an event we would take the bus from Oxford to London for a day of GSL, excellent company, drinks, pub food and kpop videos.

Outside of events the fellow attendees became my friends. We went to restaurants, played games together and grew close. I wrote and hosted quizzes with prizes generously gifted to us by local tech shops. We had shirts donated by online stores and prominent teams. I still have and wear my Team Dignitas shirt from way back when. We were even livestreamed as part of an official Blizzard event feature. But in the end London BarCraft came to a close and we moved on.

Shortly after I stopped attending BarCraft, Meltdown London opened. It was the first fully fledged esports bar in the UK (although the first Meltdown bar had opened in Paris shortly beforehand). Six years later, it has some competition. Red Bull’s Gaming Sphere opened recently, also in London, but further north in Leeds is the eDen Esports Bar. Jersey has Esports.je, Talk & Surf is anchored in Cardiff, and even GAME has entered the ring with their new BELONG gaming arenas. Esports in the UK is alive and developing!

And Meltdown? Now it operates a huge chain across Europe and Canada with locations in France, Italy, Spain and beyond. On it’s website, it attributes its success to the rise of BarCrafts.

But how did this all come about?

“BarCraft is a portmanteau name for watching StarCraft at bars. This phenomenon popped up in the spring of 2011 in the US, with the start of NASL. It is often attributed to Team Liquid user “primadog”, the redditor “o_Oskar”, and the Chao Bistro in Seattle.“

The original (now archived) post over on Reddit for the Seattle event can be found here and was a big success. Others around the world were keen on the idea; the comments section is full of people trying to organise their own BarCrafts. All you needed, as it turned out, was a group of fans and, well, a bar willing to host.

This was easier said than done.

Sports bars in their traditional form have been around a long time. Even the grimiest backstreet pubs here in England are fighting for dominance by boasting their superior sports packages. Wall mount a flatscreen TV, hook it up to a cable box, show the latest FIFA matches or stream a boxing event and put on a special for beer. Enjoy your money.

Some locations are obviously more sleek than others. The Famous Three Kings in London can show up to 14 different games at the same time. The Insider’s ‘Best Sports Bars in the US’ feature showcases a wide range of beautifully designed locations. You can find everything from burgers to oysters to cannolis.

But these places all show traditional sports. Most people, if they were asked, would probably not pick out ‘League of Legends’ or ‘StarCraft II’ as their favourite athletic pastime of choice. Football, baseball, cricket. NASCAR. Heck, even figure skating or swimming would probably be a more likely answer. And these sports are what these bars use to draw in their clientele.

So how do you convince a bar owner to let you bring a bunch of nerds to their establishment if they’ll turn off the Chicago Bulls’ latest game to show the Global StarCraft League instead? Because really, if we’re honest, at the time esports was still an industry in its infancy, especially in the west. In 2011 StarCraft II was the biggest player. Sure, there were other games around such as DotA 2 and Counter-Strike. But SCII definitely had the biggest slice of the esports pie.

For those who wanted to set up something in their area, the Teamliquid website and Reddit became valuable resources, with lengthy guides written about how to convince local bar owners to move on over for some nerd dollars, and lots of information and support available for putting on the best possible experience.

The passion of the StarCraft II fanbase was moving minds. And, perhaps more importantly to existing bar owners, money. For those bars willing to take a bit of risk by giving up a screen or two, the investment was sound. A few months after the first BarCraft in Seattle, The Wall Street Journal went to report on a BarCraft in San Francisco:

“It was unbelievable,” said Jim Biddle, a manager of Bistro 153 in Beaverton, Ore., which hosted its first Barcraft in July. The 50 gamers in attendance “doubled what I’d normally take in on a normal Sunday night.”

Fans of the Swarm

When Meltdown in London opened I took a friend to visit it. I thought it wouldn’t last. The drinks were too expensive, in my opinion. Nearly £8.00 for a fancy gaming themed cocktail! I could get a £2 pint of Archer’s and lemonade back at Assembly House. It was a bit dingy for my tastes, with little to do other than lounge on what appeared to be a second-hand leather sofa. The toilets weren’t very clean and I did not go back.

A year or so ago I was thinking about this and was surprised to find that not only were they still open, but they had done extraordinarily well for themselves. I wondered about their success. Looking through online photographs of the interior, it did not resemble the place I had visited a long time ago and I found myself pleasantly surprised to be wrong.

Now, there are a fair few existing, dedicated esports bars such as the AFKgg Gamer Lounge (which is currently looking for a new location), and there are amalgamations of bars and gaming such as the 42 Lounge in Milwaukee which presents itself as more of a nightclub and the AFK Tavern in Washington. In Australia you have the GG EZ Bar, in Toronto, you have Raiders Esports Centre, in Japan Space Station Osaka has been exceptionally well received but…not all of these are specifically esports bars.

In fact, many solely dedicated esports bars are no longer in operation. The big red ‘permanently closed’ message on Google Maps flashes for most of the locations I dig out.

What went wrong for all these places when we were packing out Assembly House with huge amounts of people six years ago? Was it a case of oversaturation? Bad timing? Terrible investments? Poor locations? What is the secret to success that the Meltdown franchise seems to unlocked? There’s a lot to consider when setting up any new venture, let alone something like this.

In Japan, things are a little more complicated. In June of 2018, three video game bar managers were arrested for copyright violations on behalf of Nintendo and Capcom. And of course the fighting game esports scene may not be as huge as big hitters like Overwatch or League of Legends, but Capcom do own Street Fighter. Could this have ramifications for locations outside of Japan? Traditionally, Riot has always been extremely fan-embracing, but if they decided to open their own range of esports bars, would they legally clamp down on those streaming their products to fans so that they could remain the monopolising entity?

Gaming is big business. Esports is becoming a massive, spiraling force in the sporting world. But like anyone opening up a new enterprise such as a bar there are plenty of things that can go wrong. Having a small startup, big dreams and a passionate fanbase doesn’t necessarily equal profit.

Gaming Bars of the Void

Nowadays, with the exception of the grand monopoly of Meltdown, it looks like BarCrafts are still around in their original form. It is simply they have morphed focus. Dedicated esports bars don’t seem to be super viable on the whole. But general gaming themed bars that host esports events on the side? These are much more common and we come full circle: a community of fans ‘renting’ out an existing location to watch their favourite tournaments. Come for the Super Mario themed drinks and sandwiches, stay for the Hearthstone World Championship Tour.

At Assembly House, we shared the floor with bemused regulars who suspiciously side-eyed the large crowd of excited young people watching aliens and robots duke it out on faraway worlds with varying degrees of disdain. Now you’re just more likely that your shared audience is going to be someone who knows who Tracer is, even if they’ve never heard of London Spitfire.

That said, maybe it is time that you and I visited (or revisited) a formative part of early esports culture. Why don’t you look up your nearest esports friendly bars? If you’re in London, maybe I’ll see you at Meltdown, indulging in a piece of nostalgia when esports was less about polished, super-hyped broadcasts of teams globally slugging it out to millions and millions of stream viewers, and more a bunch of happy nerds trying to get a 240p connection going on a borrowed projector to watch the pros zerg it up on Antiga Shipyard.

I love what esports is becoming. But I’ll never forget the kind of joy that came from London BarCraft.

Other
Share
Hayley Sherriff
Hayley is a possible vampire who stopped aging around twenty-one and is excited about gaming, cats and pastries. Although she has been around esports for over six years, she’s actually pretty bad at the whole ‘playing’ aspect of them so chooses to contribute by writing barely concealed pleas for help in the form of articles for Hotspawn and crying into all the avocado toast she’s invested in instead of buying a house.
Follow me