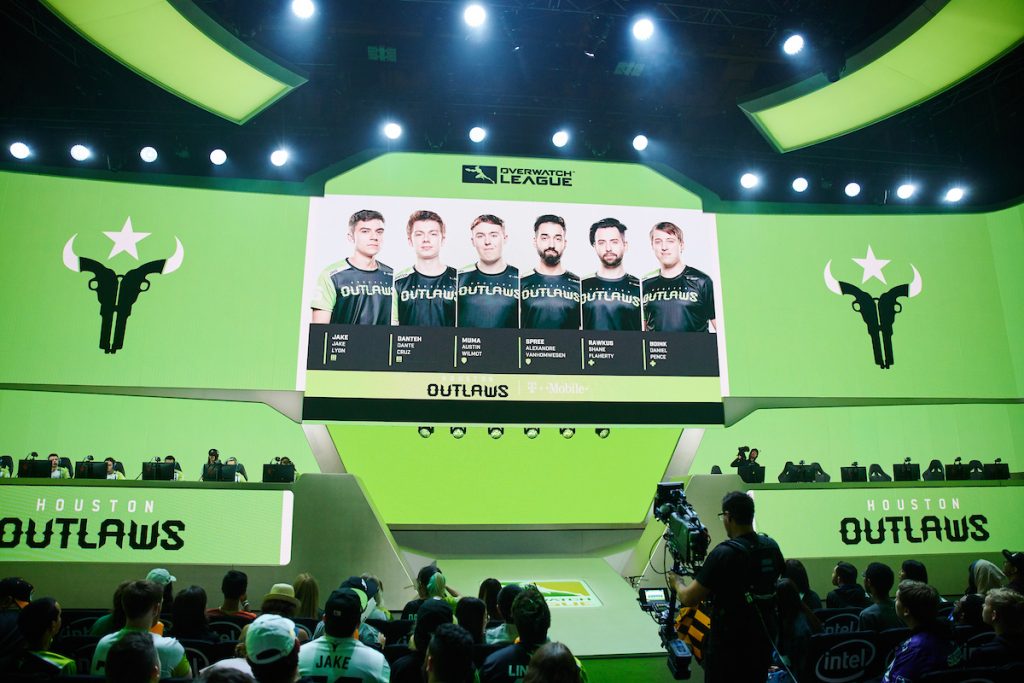 Outlaws released several core members of their roster in an attempt to start fresh heading into the 2021 season. (Photo courtesy Ben Pursell - Blizzard)

Houston Outlaws are not renewing the contracts of Austin “Muma” Wilmot, Jiri “LiNkzr” Masalin, Jeffrey “blasé” Tsang, and Seung-soo “Jecse” Lee. All four players saw a decent amount of playtime this season. The Outlaws are looking to make fundamental changes to their roster in hopes of turning things around in the 2021 season.

As the season comes to an end, we extend gratitude to our 2020 players.

Thank you for your hard work and the amazing memories we forged together during our first year in H-Town. pic.twitter.com/asxAQh6xIM

Houston is coming off a very disappointing 2020 season in the Overwatch League. They ended the regular season with a 6-15 record and ranked #16 out of 20 total teams. They were even eliminated from the playoffs by the bottom ranked Boston Uprising, so all in all, they had a pretty bad year. So it is not surprising to see Outlaws rethinking their roster and making room for some big changes ahead of the 2021 season.

Muma is an OG Overwatch pro who served as the Outlaws starting Main Tank for three years and was a member of their inaugural roster. He also competed for Team America during the 2018 Overwatch World Cup. His release signals a significant shift for the team, who have never operated without him. Outside of his top tier tanking, Muma is also known for being the first openly LGBTQ+ player in the Overwatch League.

I'm still ready to give Overwatch my everything

DMs are open or you can discord me at Muma#5300

LiNkzr is a DPS player who was also a founding Outlaws player. He was signed to Houston’s inaugural roster in late 2017, after making a name for himself competing with the Finnish esports org Team Gigantti, who won Overwatch Contenders 2017 Season 1: Europe. He also competed for the Finnish World Cup team in 2016, 2017, and 2018. LiNkzr is known as one of the most accurate hitscan players in the league and recently won the NA OWL All-Stars 2020 Widowmaker 1v1 event. He may not have been the right fit for Houston, but he has a decent chance of finding a home with another team.

My contract is not going to be renewed for next year so I am officially a free agent. I am excited (and a bit scared) to see what’s next and am open to speaking with all other teams.

You can message me LiNkzr#9885 or email my agent at linkzr@evolved.gg

p.s no twitlonger yet

Blase is a more recent addition to Outlaws. He only played with the team during the 2020 season. Before joining Houston, he competed with Boston Uprising. The Flex DPS player specializes in an odd set of mostly off-meta heroes like Doomfist, Junkrat, and Pharah. He is very good when the meta favors his hero specialities, but with the Overwatch League meta changing so often it makes more sense for Houston to invest in DPS players who are more flexible in their role. With LiNkzr and Blase’s departure, Outlaws are left with Dante “Danteh” Cruz and João Pedro “Hydration” Goes Telles for a DPS line.

Last but not least, Outlaws released Flex Support player Jecse. Jesce is a former Seoul Dynasty player, who signed with Houston at the start of the 2020 season. He saw a lot of playtime throughout the season, on both main and flex support heroes. Outlaws relied even more heavily on Jesce after the retirement of Shane “Rawkus” Flaherty partway through the year. With Jesce gone, Outlaws will look to Jung-keun “Rapel” Kim to carry the Flex Support role.

My contract with the Outlaws not being renewed and I'm looking for a team to join in the 2021 season.

By releasing so many of their key players, Outlaws are taking a gamble that they can sign some stronger players and turn things around for the 2021 season. The team will be able to start signing free agents starting on October 24th.