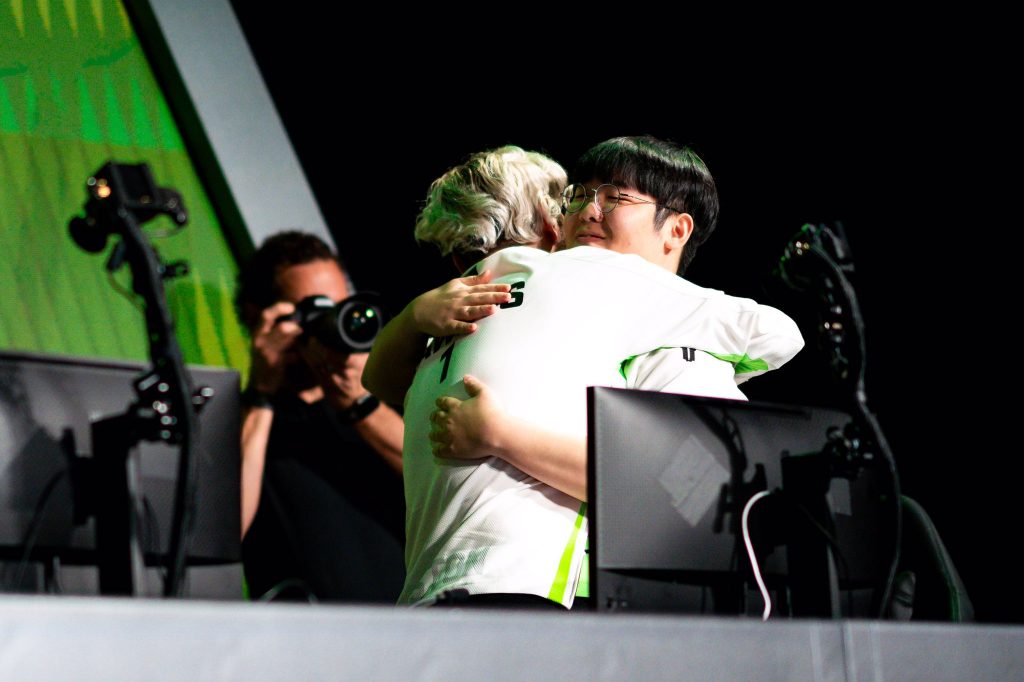 Houston was able to secure their first win of the season at their homestand over the weekend. (Photo courtesy Blizzard)

The fourth week of the Overwatch League took place in Houston and allowed the home team to finally redeem themselves. Houston won their first series of the season in front of their home crowd and broke their five-game losing steal. Atlanta Reign also made their season debut and showed that they have a lot of potential and can still be a competitive powerhouse. Other teams such as Toronto continued to struggle and fell further down the leaderboards. The Houston Outlaw Homestand was full of competitive matches, shocking defeats, and emotional redemptions.

New York has been one of the dominant teams so far this Overwatch League season and had only lost one match against Philadelphia going into the weekend. Florida, on the other hand, has had a rocky season so far and continued to struggle throughout the weekend. The first match on Saturday proved to be a struggle for Florida and a one-sided victory for New York.

New York subbed out Jong-ryeol “Sabyeolbe” Park and Seung-jun “WhoRU” Lee and put in Hae-seong “Libero” Kim and Yeon-kwan “Nenne” Jeong for the first series of the weekend. Sabyeolbe and WhoRU have had rocky performances throughout the last few weeks and the slight roster change proved to be the right choice.

New York dominated Florida on Ilios with a quick 2-0 victory. Excelsior did not miss a beat with the two new players in the game and showed excellent teamwork throughout the first map. The momentum continued into map two on King’s Row where New York secured a 4-3 win.

Dong-Gyu “Mano” Kim dominated Mayhem who could not counter the powerful Main Tank.

New York achieved the series win with a 2-1 victory on Temple of Anubis and briefly tied Philadelphia Fusion’s 4-0 record. Mayhem fans hoped their strong performance against Houston earlier this season meant the team was going to be strong competitor, but this does not seem to be the case.

Atlanta Reign made their first Overwatch League appearance of the season this weekend and did not disappoint. The Reign were considered one of the strongest teams in our preseason rankings and they confirmed this prediction with a brutal 3-0 victory over Toronto.

Andrej “Babybay” Francisty and Hyeonjun “Pokpo” Park dominated Toronto on Nepal and helped secure a quick 2-0 win. Babybay achieved a few key picks to hold the point and Pokpo maintained the pressure with a incredible 4k.

A flag has been planted on Nepal 🏁 @ATLReign declares sovereignty! …can they do that?#LetItReign #OWL2020

Atlanta achieved a full hold on Blizzard World and secured another quick map win with a 1-0 victory. Defiant were finally able to secure a point against Atlanta on Temple of Anubis. Atlanta was not fazed however and was able to adapt and secure the third map victory. Babybay continued to dominate Toronto who could not counter Atlanta’s team composition.

Houston has had a very rough season so far. The team was unable to achieve a single win going into their Overwatch League homestand weekend and hoped to change that in front of their home crowd. DPS player Jiri “LiNkzr” Masalin made his first appearance after missing the first four matches of the season due to illness. The returning player helped breathe life into the struggling team but was not enough to defeat London Spitfire.

London achieved a reverse sweep against Washington Justice last weekend which proved the team was not just a ragtag group of rookies. Spitfire maintained their confidence from the previous weekend and won the first match on Busan 2-0. They continued their strong opening performance and won Blizzard World 2-1. Houston was not willing to be swept in front of their home crowd however and came back strong after the break.

Houston won the third match on Temple of Anubis and continued their comeback by securing a 3-2 victory on Junkertown. Linkzer was a dominant force throughout the series and helped force map five with three important picks on Junkertown.

That H-town energy is like a whole-team nano for @Outlaws! 🔋

London was able to regroup and counter Linkzr on Ilios and win the series with a 2-1 victory. This marked the fifth straight loss for Houston and a stunning defeat in front of their home crowd.

Philadelphia is the strongest team in the Overwatch League so far and continued to be a competitive powerhouse this weekend. Boston has had an interesting season which has included the longest regular season match in Overwatch history. They were not able to compete against Philadelphia, unfortunately, and suffered a 3-0 sweep.

JaeHyeok “Carpe” Lee continued to do what he does best and caused havoc for Boston in the first match. Fusion’s solid team composition and great performance by every member of the team allowed quick 2-0 victory on Liljiang Tower.

Sumin “Sado” Kim helped secure a 2-1 victory on King’s Row with a solid performance that Boston was unable to counter. Sado was considered the weakest link on the Fusion lineup but has proved the naysayers wrong. Boston could not figure out how to counter the strong Fusion team composition and lost the series with a 1-2 defeat on Hanamura. The victory maintained Philadelphia’s undefeated streak and their number one spot in the league.

Atlanta Reign tried to continue their strong Overwatch League performance from Saturday in their second appearance of the weekend against Paris Eternal. Paris had a 2-1 record going into the season and proved to be too much for Atlanta to handle.

Jung “Xzi” Ki-hyo has proven himself as a strong newcomer to Paris. The DPS player had a stellar performance on Busan and helped achieve the 2-1 victory.

Paris continued their winning streak on King’s Row with a hard fought 3-1 win. Hanbeen “Hanbin” Choi helped maintain movement of the payload with a well-placed bomb that secured two eliminations.

Atlanta did not allow a full sweep on their debut weekend and took the series to map four with a 2-1 victory on Hanamura. Jun “Erster” Jeong prevented Paris from securing the second point with a solid performance that shutdown their momentum.

That red you're seeing is @ERSTER_ow all over the kill feed! 🏃‍♀️#LetItReign #OWL2020

Paris was not interested in choking the lead and finished off Atlanta on Dorado with a 3-2 victory. The Eternal roster displayed amazing teamwork and chemistry that allowed them to move the payload with ease. Atlanta had a solid performance in their first two matches of the season, but Paris showed they are a team who can compete with the best in the league.

London and Florida both wanted to finish the weekend off strong. Spitfire achieved a  3-2 victory over Houston on Saturday while Florida suffered a crushing 3-0 defeat from Toronto. Both teams went back and forth in an intense series that went to match five.

Florida began the series with a strong performance on Ilios and secured a 2-1 victory. London answered back with a 2-1 win on Eichenwalde. The third match on Horizon Lunar Colony marked the turning point of the series and was one of the closest matches of the weekend. Jun “Yaki” Ki Kim helped secure the third map with well timed eliminations that shifted momentum in Florida’s favor.

Straight to the chin! @OW_Yaki with the golden fist! 🥊#BringTheMayhem #OWL2020

London did not lose focus and forced map five with a 3-2 victory on Havana. Gilseong “Glister” Lim achieved important picks that helped London stay in the series and eventually secure their second win of the weekend.

The last Overwatch League match of the weekend gave Houston one final shot at redemption in front of their home crowd. Toronto also lost their first match on Saturday against Atlanta and did not want to go home with two losses.

Toronto started off strong with a 2-1 victory on Nepal that led many to believe another Houston defeat was on the way. Houston finally came together in the second match on King’s Row with a 4-3 win.

Outlaws subbed in Dante “Danteh” Cruz and Jeffery “Blasé” Tsang for map three on Horizon Lunar Colony which proved to be the right choice. They secured the third map with a 1-0 victory and took the series to map four. Houston finally showed solid teamwork and team composition that Toronto was unable to stop.

They secured their first win of the series with a 2-1 victory on Dorado and sent Toronto home with a 0-2 weekend record. Houston finally ended their losing streak in front of their home crowd and hopefully will continue to perform well as the season continues.

The Houston Outlaw Homestand gave fans their first glimpse at Atlanta’s strong lineup and allowed Houston to break their brutal losing streak. The next homestand will take place March.7-8 and will be hosted by Washington Justice.

Washington will have two chances for redemption next week against Boston and New York. New York has proven to be one of the best teams in the league and will be a tough team for Washington to beat. Houston will also have their work cut out for them as they will face Paris Eternal on the first day of homestand.

Toronto and Florida both have 1-3 records and will face go head to head to see which team will continue to drop down the leaderboards. Toronto lost both matches this week and will hopefully be able to refocus and avoid a three-match losing streak.

Paris will have a tough time securing a win against Philadelphia who is currently undefeated and has shown no signs of slowing down. Paris will need to find way to shutdown Carpe, or he will continue to cause havoc.

Atlanta Reign will face Boston in their third match of the season. Boston is currently 1-3 and should be an easy win for Atlanta if they can sharpen their performance and allow their outstanding roster to perform.

The next homestand will take place March 7th – 8th and will be hosted by Washington Justice.