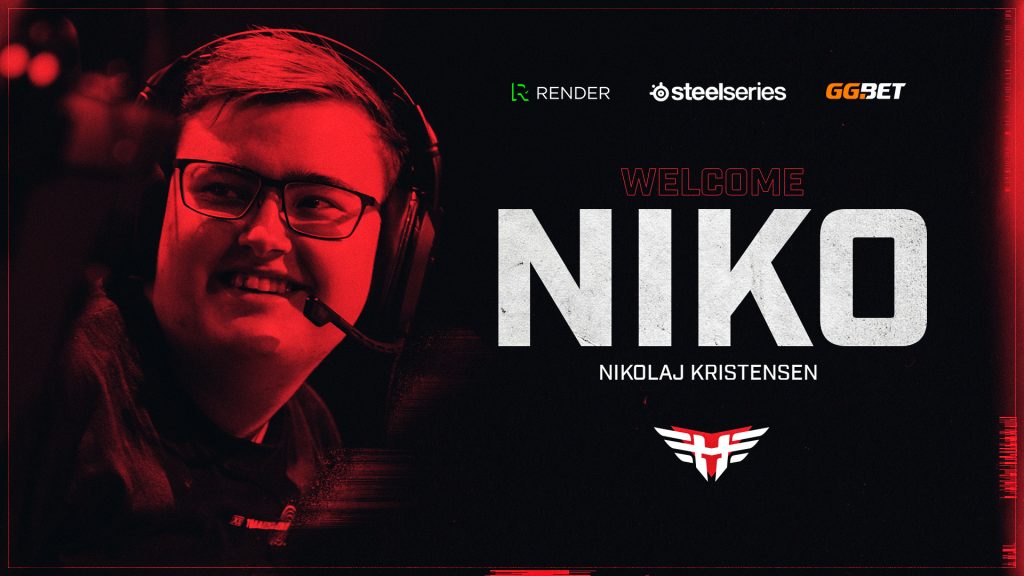 Heroic has filled their last spot on their CS:GO lineup with Nikolaj “niko” Kristensen.

The time has come to announce the final Hero! Niko will now be joining Heroic in its quest towards the top.

Heroic recently benched Patrick “es3tag” Hansen and Marco “Snappi” Pfeiffer at the beginning of April. Es3tag agreed to join Astralis in July while Heroic was in the process of selling the team to the Chinese organization FunPlus Phoenix. Es3tag’s deal halted the negotiations of the FPX buyout and left the team in limbo and caused the players to return to Heroic. The players were benched on their return and Heroic was forced to revamp their lineup.

After Heroic benched es3tag and Snappi, they signed Rene “TeSeS” Madsen who formerly played Copenhagen Flames. Niko fills the final spot on the roster as Heroic has bought out his contract with OpTic.

Niko has a lot of experience and played for Heroic previously in 2016 and 2018. He has also played for major organizations such as OpTic, Rouge, and North. He achieved a fourth place finish at IEM Katowice 2017 and a first-place victory at DreamHack Masters Stockholm 2018.

Niko expressed his excitement to join the team in the official announcement:

“I’m really happy to join Heroic. I look forward to do my utmost and be the player I know I can be and help both the team and the organization to great results!”

In game leader Casper “cadiaN” Moeller also expressed his optimism about the future of the new lineup:

“I am very happy to work with Nikolaj! I think he is one of the best players in Denmark, and definitely was a high priority for us… I have high hopes for the future!”

The new Heroic lineup will make their first appearance at the Elisa Invitational next week for their chance to secure one of two slots for the BLAST Premier Spring Showdown.

The new Heroic lineup is as follows: