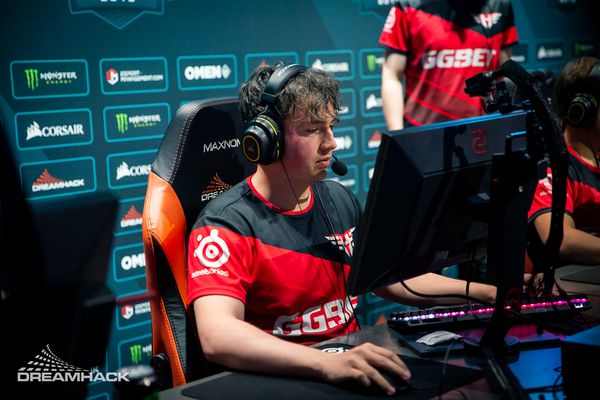 Astralis has signed a sixth CS:GO player amid a trio of organization controversy. (Photo courtesy DreamHack)

The 24-year old Dane is said to start playing with the Astralis organization on July 1st, when his contract with Heroic expires. On Wednesday, Astralis attempted to purchase the remaining three months of es3tag’s contract to sign him immediately. But ultimately, the organization opted to wait until his contract finished in light of an $800,000 buyout fee.

This addition will see the establishment of a six-man roster for the Danish champions, which, according to Astralis Founder & CEO Nikolaj Nyholm, has been a “long-standing ambition” of the team.

In a Twitter thread, Nyholm explained the transition to a six-man formation was top of mind since star AWPer Nicolai “device” Reedtz had been forced to take several weeks of medical leave in 2017. The organization’s success in CS:GO is underpinned by a heavy emphasis on both physical and mental health; serving as one of the first teams to successfully utilize sports therapists and promote well-being. With this alteration, Astralis will continue to pioneer the working conditions for its players by adding reserves to the active roster.

Astralis’ Director of Sports, Kasper Hvidt spoke to the team’s decision in a statement: “Our work with Astralis and all our teams is focused around performance and health. It’s our responsibility as an organization to secure optimal conditions for our employees on all levels, and especially our players, who on a constant basis experience the highest pressure to perform. Increasing the roster size to six players is something we have worked on for a long time with relevant stakeholders in Counter-Strike.”

“This approach is no different than in traditional sports, but it’s new to Counter-Strike, and a change like this will take time to optimize for full advantage. The players, coach and our performance team have been involved in this decision and everybody agrees it is the way to go.”

A six player roster is currently unprecedented at the highest level of CS:GO. Teams which require substitution in matches and at tournaments will typically field last-minute stand-ins. Although, as we’ve see time and time again, utilizing players on these brief temporary basis generally does not yield strong results. With the introduction of dedicated reserve players, this could change as players would have time to become acclimated to the playstyles of their teammates.

The news does not come without skepticism, however. It remains generally unknown how a sixth player will be able to be used from an official, regulatory standpoint in tournaments and leagues. This additionally poses the question of how practices will be structured to accommodate a six-man roster.

According to the ESL Intel Extreme Masters rulebook, for example, section 7.10.3.2 states that “during offline competition, line-up changes are only allowed in between maps.” Nyholm confirmed the decision to substitute players during competition will be at the discretion of its coach, Danny “zonic” Sørensen.

Zonic decides. Hopefully we will be allowed to make substitutions in between maps. Or from T to CT side?

The signing of es3tag to Astralis also raises some unnerving doubt around the deal between FunPlus Phoenix and Heroic which occurred ‘officially’ on March 15th. Although prior to this, the Heroic roster had already been competing in Flashpoint Season 1 under the new banner, with es3tag being one of those players. Rumors are now beginning to circulate that the deal between the two organizations was unfinished.

With Astralis picking up es3tag, FunPlus Phoenix was forced to forfeit their Flashpoint Phase 1 match Saturday against Orgless. This puts the team’s participation in the remainder of Flashpoint Season 1 at whole in jeopardy. As of now, it’s unclear whether they will compete in Phase 2, or the organizers will look to incorporate a new team into the event.

The news of Astralis’ signing had prompted Erik Askered, CEO of Heroic, to provide the following statement to HLTV.org: “I am unable to comment at this moment, as we are making legal preparations. This is due to the fact that we know and can prove that Astralis has acted in bad faith, and have considerably affected the sale of Heroic to FPX.”

According to Nyholm, who responded to Askered’s statement on Twitter: “No actions were taken to the detriment of Heroic or FPX, and we have no insights into the agreement between the two. Our objective has been to sign an excellent player upon his free agency to achieve our goals of performance excellence and player health.”

We’ll have more on this story to come as it develops.

On July 1st, the Astralis roster will be: