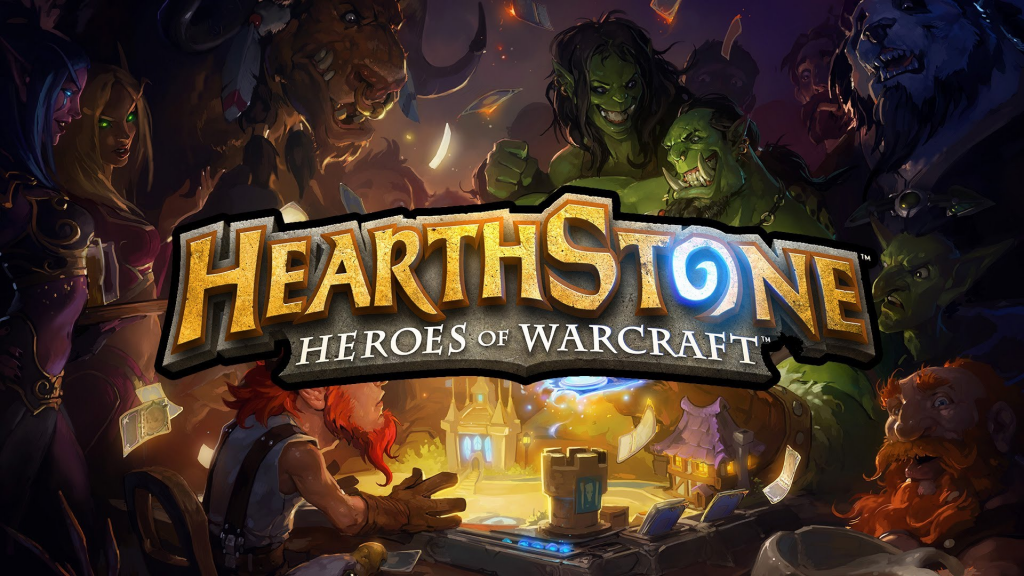 Blizzard’s Hearthstone: Heroes of Warcraft is the leading digital card game in terms of popularity. With over 1700 cards the game comes with depth and a periodically evolving meta as new cards come in and old cards rotate out. Hearthstone capitalizes on the digital format to create cards that could never exist in a tabletop card game.

With impressive art and interactive boards, the game’s relative simplicity helps attract new players. Unfortunately, the high cost to be able to build a competitive deck turns many away. Like most other card games, Hearthstone isn’t cheap. But, unlike others, the cards don’t have a physical representation and can’t be resold. If you are a smart collector in Magic the Gathering, it is possible to have your investment grow. In Hearthstone all cards and packs are sunk cost.

Why is Hearthstone so Popular?

Despite the attacks on player’s wallets, Hearthstone is still the most popular digital card game in the world by a large margin. Blizzard deserves credit for taking the deep lore of World of Warcraft and turning it in into a thematic card game.

Each expansion delves into another area of WoW and introduces new mechanics and cards that help keep the game fresh. The game’s popularity comes from a combination of pleasing artwork and voice lines that build a world in game and the expansive card pool that always gives players something to work for.

The constant debate for Blizzard is how to balance random number generation or RNG. Card games are inherently more random than other esports just simply because of drawing from a deck. Sometimes the card needed is at the bottom and the player is just out of luck. That’s just the reality of any card game. The question for Blizzard is “how much do we want to lean into RNG as a core mechanic?”

Originally RNG was a core staple of the game with powerhouse cards like Yogg, Sylvanas and Ragnaros all relying heavily on RNG. But Yogg was nerfed and Sylv and Rag were both moved to Hall of Fame, taking them out of the standard competitive meta. In the more recent expansions, Blizzard has pushed towards more “fair” mechanics like discover – choosing one card out of three – and the cards with RNG haven’t been good enough to see competitive play.

How do you Play Hearthstone?

Only a couple decks require the actions per minute (APM) that necessitate a solid computer and the game can be played on most phones. Just make sure they have over 3 GB of storage because the game file is massive.

Once in the game, Hearthstone is split into four main sections:

The most popular section is ranked and casual play. In ranked, players compete for stars to move up the ladder beginning at Rank 25 and going through Rank One to Legend. Casual is mostly used to try out meme decks or play without risking ranked stars.

In both formats, players choose one of the nine classes and build decks of 30 cards, and by build decks I mean they copy deck codes from Tempostorm.

Each class has its own identity and unique cards that create archetypes. Which class is in favor has a lot to do with the previous expansion.

Ranked play is split into two formats. The Standard format which sees a constant rotation of cards in addition to the classic set. This is the format for the vast majority of tournaments and Blizzard’s official tournament structure that will be touched on in the next section.

The other format is Wild, which – to take Blizzard’s language – is just that, Wild. All cards can be used in the Wild format and the power levels of the decks are higher than Standard. Still, no decks in Hearthstone approach the possibility of ending the game on turn one, which can happen in other card games.

The Solo mode in this game pits players against AI controlled bosses. Modes like Dungeon Run and Monster Hunt introduce unique cards and situations. These modes are largely designed for the new player because decks are created as the run progresses and don’t require an already existing collection. Generally, these runs provide a reward on the first-time completion, but giving out consistent rewards would have bots farming these modes, a problem that occasionally exists in ranked.

My personal favorite, Arena is a mode that comes with an entry fee and corresponding rewards based on performance. Players start by paying 150 gold, or $1.99, and then choose one of three classes. Then they must draft a deck by choosing one of three cards 30 times to fill up a deck. The drafting part of arena is where great decks are made and requires a lot of foresight from the player. Tools like HearthArena can help new players draft successfully.

Arena is my favorite because it represents a truly level playing field. Because all players must draft their own decks, anyone has the chance to create something broken. The gameplay is much simpler because decks can’t be built with crazy combos and things like good trading and mulligans are rewarded more in this mode.

In addition, it is a way for new players to build their collections. Once a deck is drafted players get three losses before their arena run is over. Wins come with increased rewards and top out at 12. At seven wins players are guaranteed to get at least 150 gold along with a pack of cards. Packs cost 100 gold, so, if a player averages at least seven wins, they could theoretically go “infinite” and build their collection one pack at a time. That’s why I recommend it to all new players, getting good at arena is the best way to build a Hearthstone collection without breaking the bank.

The fourth and final category is the Tavern Brawl, a unique challenge each week. Sometimes decks are built for the player and sometimes they have to be built. Every week the first victory in Tavern Brawl earns a classic pack. While Hearthstone does have a massive barrier to entry, these initiatives help a bit.

How is Competitive Hearthstone Structured?

Hearthstone’s competitive scene is quite complicated and if you are interested in a more in-depth rundown, check out this synopsis from plus.mana. If you want to get really technical, here are the official competition rules. I’ll try to sum it all up here.

The World Championship features 16 players. Those players are chosen with four qualifying through seasonal playoffs in Winter, Spring, and Summer. The four main regions – Americas, Europe, Asia-Pacific and China – each send four players to the seasonal championships. Those 16 players compete and the top four go to Worlds. The final four players in the World Championships come from Last Call, the top HCT points earner not already qualified from each region.

To reach the seasonal playoffs, players have two options. Either win a Tavern Hero Qualifier or finish in the top 64 players in HCT points.

Tavern Hero Qualifiers are regional tournaments that provide instant entry into the seasonal playoffs, only eight players enter through the tavern. HCT points are awarded through smaller tournaments, major events and monthly ranked ladder finishes. This makes Hearthstone one of the few games where the main ranked play server directly affects the path to the world championships; this arrangement also presents a set of issues.

This complicated ranked system and the volatile nature of Hearthstone means that the competitive scene is constantly changing with new faces in each season. It also represents a grind for HCT points that has pushed many pros to retire from competitive play.

Who are the Best Hearthstone Competitive Players?

Competitive Hearthstone is a bit of a mixed bag. Unlike other esports, luck will always play a factor in who ends up winning a tournament. With that being said, some players have proved themselves on the highest stage with a consistency that deserves recognition:

Tom is the current defending Hearthstone World Champion. He qualified through Last Call and took down crowd-favorite Fr0zen in the finals. He earns this spot for his brilliant play on the big stage in Amsterdam and his keep of Ultimate Infestation – a ten-mana card – off the mulligan in the deciding game was an unconventional and genius play.

Tom60229’s competitor in those finals is undoubtedly the best American player in the game. He fell victim to a classic confetti jinx when he went up 2-0 in the final best-of-five series and confetti streamed from the ceiling. With that, the momentum shifted and Tom completed a reverse sweep to become the 2017 champion.

The Russian is best known for this play that spawned a million memes. Babbling Book is one of those RNG cards I alluded to earlier and in this clip, you can see why. Pavel had no way to deal with the Malygos and the random spell delivered by Book happened to be the best Mage single target removal spell, at the perfect time. That play helped him win the 2016 World Championship.

While that solitary moment is luck, Pavel has proven himself as one of the top Hearthstone players at one time boasting a win rate over 70% in professional play.

Who are the Best Hearthstone Streamers?

While the official Hearthstone events draw decent viewership on Twitch, casual streaming is where the game truly thrives. From Arena specialists to absurd combos to past champions, Hearthstone streams have a lot of diversity.

Firebat was the first Hearthstone champion in 2014. He used that initial success to transition to being a successful streamer. He generally avoids being tilted and mixes fun decks with competitive insights. If he is streaming with Zalae – one of the top competitive players – I always stop to watch because the two have great banter and their conversations show how to gain an edge at the top level of the game.

Kibler is the most decorated streamer in Hearthstone. In his normal streaming setup, his background is littered with various trophies and medals. But the trophies aren’t from Hearthstone, they’re from Magic the Gathering. Known as “The Dragonmaster,” Kibler is a member of the MTG Hall of Fame and one of the most popular players of all time.

Kripp is the most popular streamer in Hearthstone with over a million followers. His combination of dry humor, Hearthstone knowledge and true salt has made him a dominant force in Hearthstone streams. He’s an arena expert who has topped Blizzard’s list of best win rates. One of his best moments “pressing the button” where he got rid of every single duplicate card in his collection after he hit a million subscribers on Twitch. His thousands upon thousands of cards should have prompted an overwhelming animation but instead caused his game client to crash.

Another arena specialist, Hafu has cemented herself as one of the best arena players and streamers in the game. In February of 2017, she placed three accounts on the top 100 list for arena win rate, including the second spot. Her personality is about as opposite Kripp as possible and runs a chill stream with the same high-level arena knowledge.

Airport Security: Be on the lookout for man with mask running around the airport screaming "I HAVE LETHAL!" pic.twitter.com/ueFfUbT2UT

Toast was a relatively small streamer who went live every broadcast with a cardboard piece of toast over his face. As his popularity grew, he eventually outgrew the toast act and hung it on the wall behind him as he streams. His name comes from voice line of Rogue card SI:7 Agent who says “This guy’s toast” but sounds more like Toast’s namesake.

Hearthstone
Share
Mitch comes from a background in sports broadcasting at the University of Oregon, while there he competed for the U of O Hearthstone team and saw the potential for content at the crossover of sports and esports. In addition to Hotspawn, Mitch writes for SportTechie and the National Football Post. Follow him on Twitter @Mitch_Reames.
Follow me