How to Play Raze

Raze is best used to flush out your enemies. (Photo courtesy Riot Games)

Riot Games’ newest release VALORANT is still in closed beta but has everyone buzzing. The first-person shooter has 10 unique agents that each offer different abilities to bring something different to the table. Raze is a duelist who excels at dishing out damage and flushing enemies out of tight spaces. This guide will explain Raze’s abilities and the best way to use them both offensively and defensively. 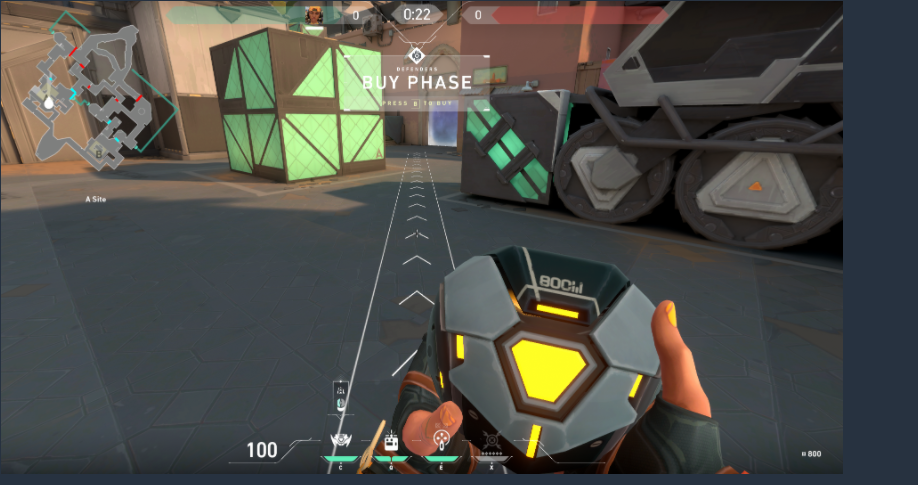 When Raze equips a Boom Bot pressing fire will deploy the bot, causing it to travel in a straight line on the ground, bouncing off walls. The Boom Bot will lock onto any enemies in its frontal cone and chase them, exploding for heavy damage if it reaches them. Boom Bot costs 200 credits and only one can be purchased and used per round.

Boom Bot can be used offensively in different ways. The primary purpose of Boom Bot is to scout areas for defenders. By angling the Boom Bot from behind a wall or cover, you can deploy the bot in a way that forces enemies to either reposition or shoot the bot before it locks onto them. Boom Bot can also be used to aggressively take small rooms. If you deploy Boom Bot, you can follow quickly behind it, forcing the enemy to have to decide whether to shoot you or the Boom Bot. 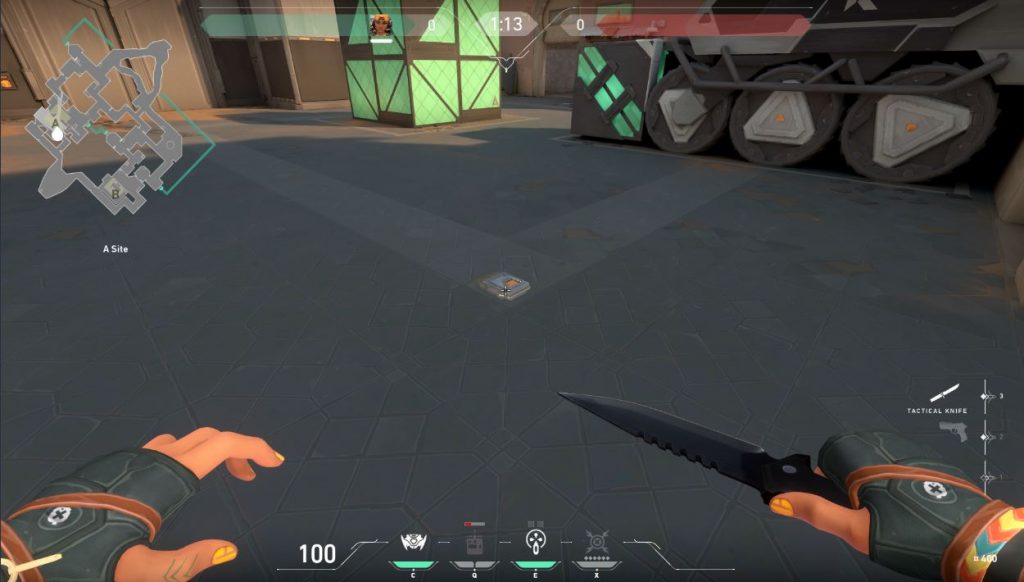 Raze instantly throws a Blast Pack that will stick to surfaces. Re-use the ability after deployment to detonate, damaging and moving anything hit. Each Blast Pack costs 100 credits and up to two can be purchased and used each round.

Blast Pack can be used as a damaging ability or for mobility. Blast Pack does not damage Raze, instead propelling her in a direction based on her position when Blast Pack detonates. Blast Pack will also propel Raze further when she’s in the air, so timing the detonation with a jump offers the most mobility.

Blast Pack can also be used to flush enemies out of tight spaces. While it doesn’t have the range of Paint Shells, Blast Pack can be used in close quarters to offer more burst damage.

Blast Pack can be chained with the rest of Raze’s kit to pull off some nice plays. Timing Blast Pack to explode underneath the Boom Bot can propel it over obstacles, changing its path unexpectedly. Blast Pack is also great to use after activating Showstopper. Showstopper has perfect aim, meaning it is not affected by movement. Use Blast Pack to create better angles for your rockets and to quickly turn corners for a surprise kill. But remember, while Raze doesn’t take damage from Blast Pack, it doesn’t prevent her from taking fall damage. 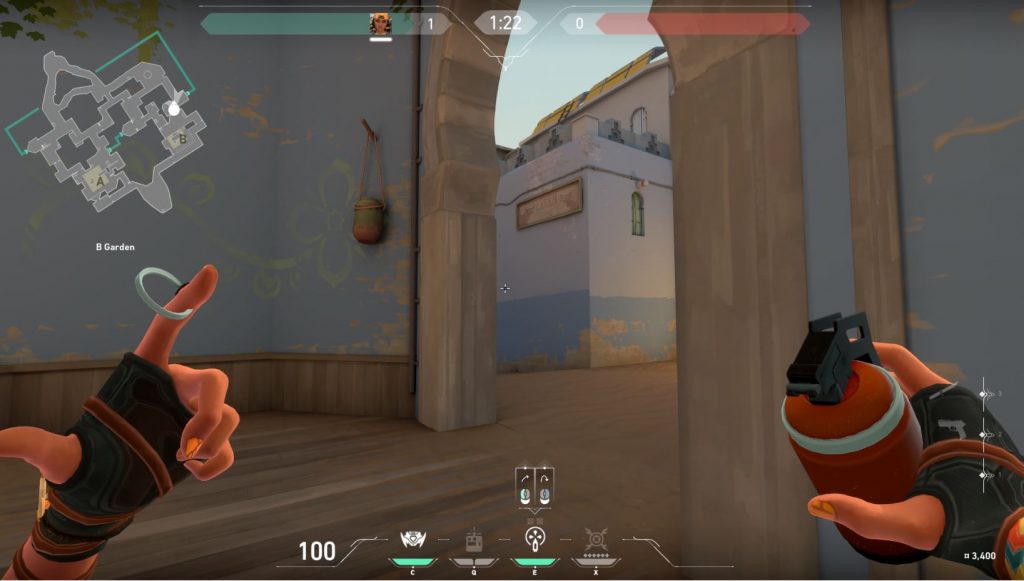 Paint Shells is Raze’s signature ability. She equips a cluster grenade and fires to throw the grenade, which does damage and creates sub-munitions, each doing damage to anyone in their range. She receives one free grenade per round and gains one refresh of Paint Shells for every two kills she gets in a round.

Paint Shells is Raze’s most used ability, as it comes free every round. After equipping, pressing left click will throw the grenade, while right click will perform a shorter underhand toss for close quarters.

Paint Shells is primarily used to flush enemies out of a spot on the map. It can be used in either a spot that is known to have enemies, or can be used to clear rooms as you traverse the map. The sub-munitions give Paint shells a very large radius, meaning it can very reliably clear out a large area of a room. Paint Shells does enough damage to one-shot enemies, so there is no way to tank the full damage and survive.

BRING OUT THE BIG GUN 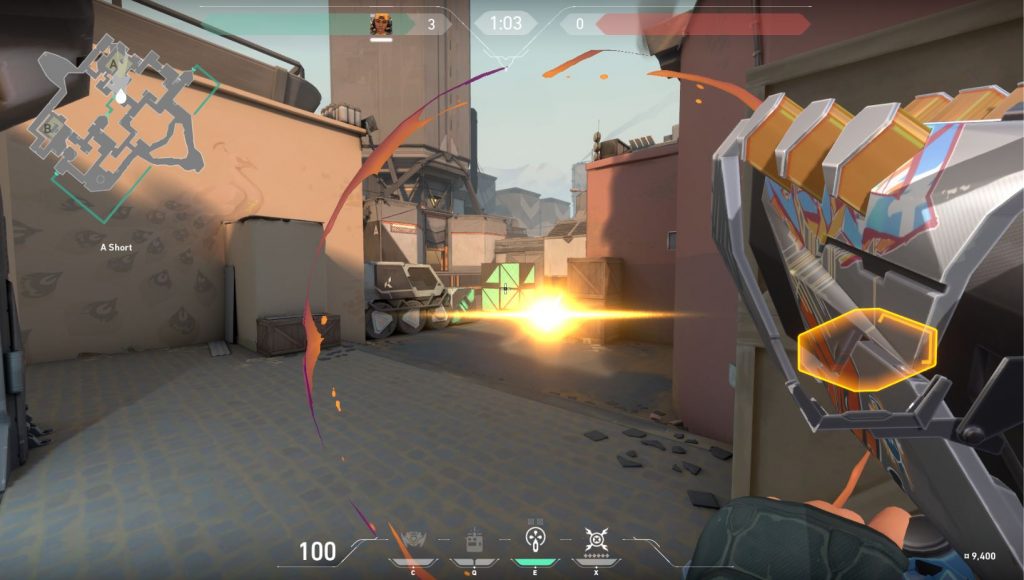 Showstopper is Raze’s Ultimate ability that equips a Rocket Launcher. Upon launching she fires a rocket that does massive area damage on contact with anything. It costs six points to activate.

Showstopper is what can make Raze so fun and so frustrating depending on which side you’re on. The rocket is basically a guaranteed kill when used properly. The damage is consistent through the entire radius, so enemies catching the full blast will get one-shot.

Showstopper does have an animation time when activated, so it must be activated before its intended use. Raze has 10 seconds to launch her rocket after activation.

Showstopper works very well in combination with Blast Pack. Raze can activate Showstopper, throw down a Blast Pack next to her, and explode out of cover, launching a rocket in mid-air. That can give her a better angle to hit multiple enemies and can catch the opposing team by surprise. Because it explodes when it comes into contact with a surface, it’s better to shoot down on enemies so that they are caught in the explosion radius even if you miss the opponent.

Like her other abilities, Showstopper can also be used to clear areas. It obviously isn’t as economical to use her six point ultimate to clear corners, but it can be better than nothing if no enemies are in plain sight after your first activation.

Raze is the perfect agent for an aggressive play style. All of her abilities can be used to flush out enemies and help her team push forward. Using her abilities together is key to mastering Raze, as her combos in quick succession can offer little room for opponents to outplay her. If you’re looking for an agent to help get you top frag on the scoreboard, Raze’s high damage kit is your best bet.