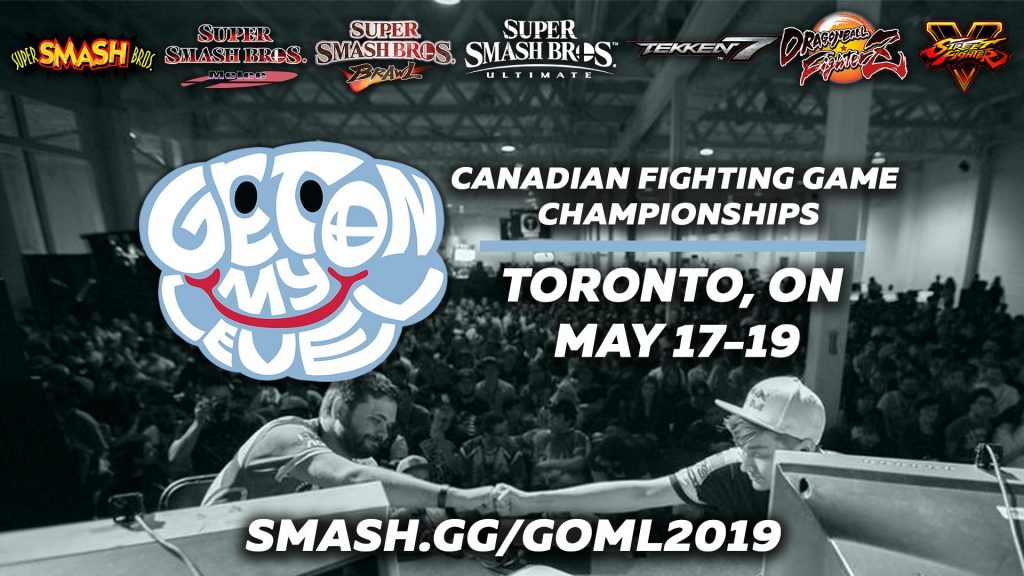 Get On My Level (GOML) 2019 happens this weekend, May 17-19. The GOML fighting game tournament series has been one of Canada’s best since it began in 2014, every year hosting various titles from the Super Smash Bros. franchise and attracting talent from far beyond its home country’s borders. GOML 2019 will feature events for the original Super Smash Bros. along with Brawl, Melee and Ultimate. Additionally, GOML’s TO team from Even Matchup Gaming decided to branch out a bit this year by partnering with WorldGaming’s Northern Fights event to debut brackets for games such as Tekken 7, Dragon Ball FighterZ and Street Fighter V. The event also features a controversial ban on wobbling in Melee.

GOML 2019 will boast over 1,400 attendees, so you know there will be no shortage of talent for any game. We’ll see Jeffrey “Axe” Williamson, Juan “Hungrybox” Debiedma, Zain Naghmi, Nairoby “Nairo” Quezada and even Canada’s own Smash 64 champion, Daniel “SuPeRbOoMfAn” Hoyt. Of course, these are just a few top players attending.

To Wobble or Not To Wobble

The meta for both Smash 64 and Brawl has remained quite static for years, while Ultimate’s seems to change every week. Melee, however, is somewhere in between. Melee is almost two decades old, so it’s safe to say the code has mostly been cracked, but that’s not to say it’s close to set in stone. Recently, an age-old and very divisive question has reared its head once again—to ban wobbling or not to ban wobbling? GOML’s organizers have decided to rock the Melee meta’s boat by choosing the former, banning wobbling from this year’s event.

On Valentine’s Day, GOML tweeted, “Based on player feedback the team has decided there will be no wobbling this year.” Naturally, the tweet elicited mixed responses—Melee pros Axe and Zain replied with celebratory gifs, while a number of other users made their disapproval known. Generally, the arguments against wobbling attack it for being non-interactive and exceptionally easy to execute while anti-ban players argue that without it, the Ice Climbers would be effectively powerless. Players’ opinions on the matter vary across the spectrum, so of course, it’s not a black and white issue.

You can find top players like William “Leffen” Hjelte and Joseph “Mang0” Marquez in the middle ground. In a YouTube video, Leffen describes wobbling as “mostly broken and degenerate” at lower skill levels, while stating that the tactic weakens as you move up the skill ladder. Nonetheless, he describes the technique as “easily the single most broken move in [Melee].” He clarifies that an outright wobbling ban could prove tricky, but says his preferred approach would be to ban it against all characters other than the “floaties,” which refers to characters with low fall speeds. Mang0 doesn’t care either way—he’s told his stream viewers,  “if wobbling gets banned, I agree, and if wobbling doesn’t get banned, I agree… either one I’m fine with.”

So… what is wobbling in regards to Melee? It refers to an inescapable infinite damage combo Ice Climbers can perform off a grab. For a visual, check out this video:

While the poor Bowser gets walloped all the way to 999%, most tournaments currently set wobbling’s damage cap to 300%, at which point it could be considered stalling. The Melee Recommended Ruleset decrees that wobbling remain legal, but in the end, a ban is left to each tournament organizer’s discretion.

Get On My Level 2019 will be the first major running a wobbling ban in years, and it will be interesting to see how the ban affects the outcome. No matter the results, though, it seems like a win-win for people advocating a widespread ban. If Ice Climbers players do well or about the same, it shows they don’t “need” wobbling to succeed; if they do poorly, it supports the argument that they’re carried by the technique. It doesn’t seem that any prolific wobblers are registered, however, so it’s possible there won’t be much data to work with regardless.

You can find GOML 2019’s tournament schedule here and catch all the action on Even Matchup Gaming’s various Twitch streams.