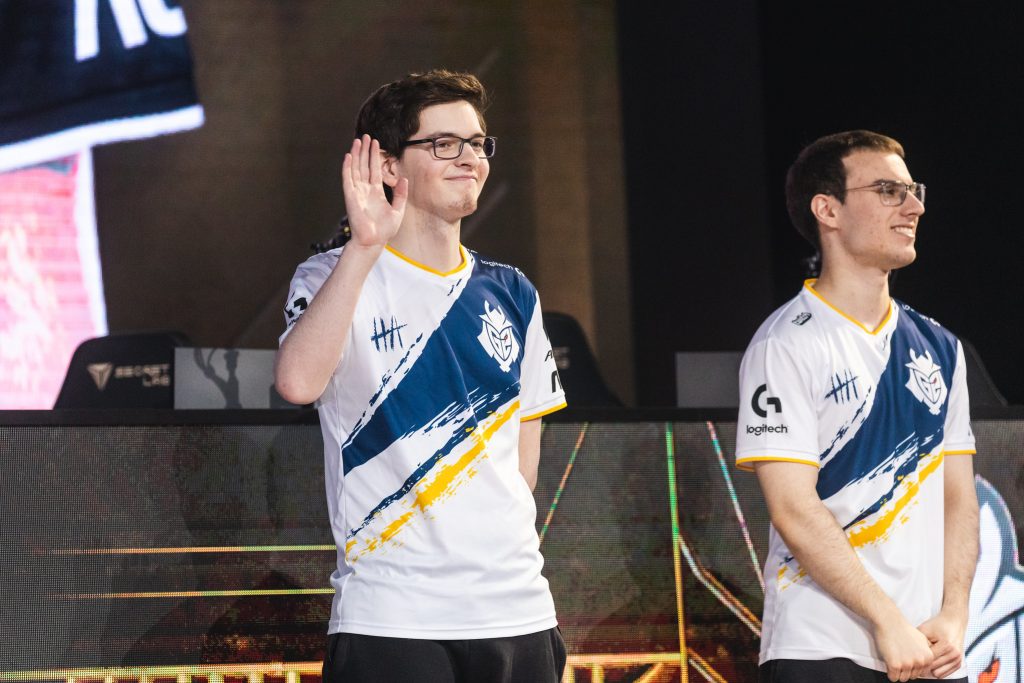 G2 Esports are center stage now as they will meet Team Liquid in the grand finals of the 2019 Mid-Season Invitational. (Photo by Colin Young-Wolff/Riot Games)

The Mid-Season Invitational 2019 semi-finals have been a rollercoaster. On Friday, May 17, Team Liquid defeated Invictus Gaming, the reigning World Champions, in the most iconic upset in North American history—possibly all of League of Legends’ history. Then, G2 Esports defeated SK Telecom T1 in a best-of-five. Now, for the first time in MSI history, the grand final will be an all-western showdown.

Heading into the series, G2’s Rasmus “Caps” Winther had some strong words to kick off the hype. Caps stated that “Faker has never lost in an international tournament before the final, so I’m pretty excited to give him the first loss.”

"Faker has never lost in an international tournament before the Final, so I'm pretty excited to give him the first loss." –@G2Caps #MSI2019

The 2019 Mid-Season Invitational Semifinals continue with @T1LoL facing off against @G2Esports at 12AM PDT / 9AM CEST! #G2WIN or #SKTWIN? pic.twitter.com/ntkRxcH4Sa

However, G2 Esports didn’t start off strong against SK Telecom T1. SKT had an amazing start with first blood. The fighting comp SK Telecom used was too much to deal with for G2. G2’s Sona-Taric comp was completely rolled over as the Jarvan, Kennen and Lissandra locked G2 down and ended the game in 24 minutes.

G2 Esports had their own payback to dish out in game two. The game felt long due to technical issues, although that never thwarted the European momentum. G2 picked up a stylistically aggressive comp with Akali, Draven and Morgana, with great pick and engage potential from Neeko and Sejuani. This proved effective for G2 as they ended the game at the 30-minute mark, with Cap gaining a pentakill on Akali and a 13K gold lead.

Game three was the moment the world knew they had a series unfolding right before their eyes. SK Telecom T1 fought they had the early game under control by picking up a double kill the first ten minutes. In reality, G2 had tricks up their sleeve. SKT committed to a bot lane tower dive, only for G2 to deny them. SKT reformulated their execution and snowballed the game after that point. G2 failed to make their won successful engagements, which lead to gold disadvantages becoming more and more prominent. By the end of the game, it was G2’s own proactive decision that lost them the game and put the series on match point.

As the subheading says, game four was the epitome of back-and-forth action. G2 led the early game with greater dragon control and tower pushing. The gold lead this game was created from greater micro plays rather than the brutality of previous games. But SKT’s Lee “Faker” Sang-hyeok made such an impressive play that fighting was back on the menu. During the mid-lane tower siege, Faker’s Sylas stole Martin “Wunder“ Hansen’s Gnar ultimate, dashed towards G2, flashed and used the ability to force G2 in an unfavorable spot. This sole play was the catalyst that gave SK Telecom T1 a fighting chance.

.@Faker hits the MASSIVE five man Gnar ult on Sylas to get @T1LoL back into the game! #MSI2019 pic.twitter.com/Z07H8K0oaj

The match continued to be a back-and-forth match, until G2’s split-pushing pressure counteracted SK Telecom’s as SKT were forced back to defend the base from Wunder and Caps.  This proved effective, and Wunder succeeded in crushing the red side inhibitor, sending the series to game five.

For the final game, G2 pulled out a strategy rather unique to them. G2 Esports’ Luka “Perkz” Perković is a mid lane player at heart, and he brought out Syndra, a strong burst mage. Meanwhile, Caps played Lissandra for a crowd control mage, while Wunder used his iconic Pyke top. To round it out, Marcin “Jankos” Jankowski and Mihael “Mickyx” Mehle played Rek’Sai and Galio to act as engage. G2 really wanted to utilize their team-fighting strategy to snowball early, which lead to a crazy fight in the bottom jungle contesting no objective. G2 committed heavily on the engage and pick potential while SKT tried to win through tower and macro pressure.  Eventually, SK Telecom made their own fight around Baron and won a team fight to make the game even. In the mid game, SK Telecom won another fight at a great cost and tried to claim Baron. G2 Esports responded with teleports and roaming and pressured them off, only for G2 to take Baron themselves and then, to take the series.

With such a victory comes a historic moment in competitive League of Legends. This is the first time an international event will have an all-Western final when Eastern teams were also competing. Historically speaking, the West has been lacking behind its international counterparts since Season 2.

Second date with Faker be damned.

The West has risen! See you tomorrow @G2esports

There is a lot of hype heading into the MSI final tomorrow as the world awakes to potentially a new era in competitive League of Legends.