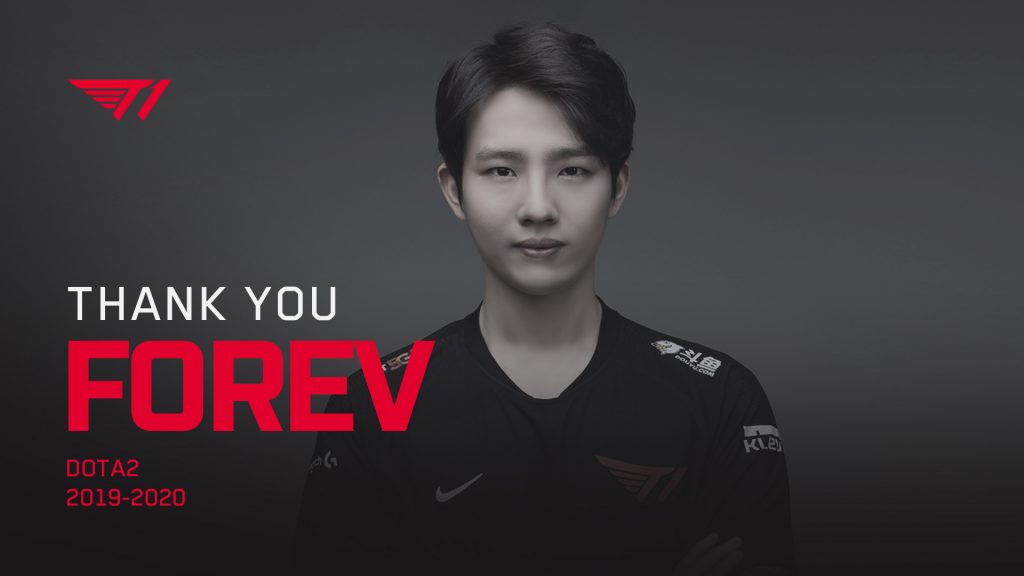 Forev had joined T1 as the flagship player of a new roster, but will now be the first departure from that lineup. (Photo courtesy T1)

T1 have announced the departure of Lee “Forev” Sang-don from their Dota 2 roster. The move was revealed across social media Wednesday.

Today we part ways with Forev. We highly appreciate his contribution to the team and wish him all the best.#T1WIN #T1Fighting pic.twitter.com/heiTyjDYvK

Forev joined T1 as the first member of the organization’s dramatic entrance to Dota 2 in 2019. The veteran player was a huge get for the South Korean team taking its first steps into a new game. Long known as a dominant force initially in StarCraft, and most famously League of Legends, T1 picking up Forev, arguably the most famous South Korean Dota 2 player ever, was a natural fit.

T1 is excited to finally announce our new international roster for the @DOTA2.

However, T1 has had mixed results in a crowded and hyper-competitive Southeast Asian scene. While easily able to dominate Tier Three tournaments, the lineup struggled as it moved into Tier Two, losing to the likes of Geek Fam and TNC Predator in their most recent outings.

The removal of Forev may mark a move towards a more unified team identity for T1 – The squad’s remaining roster are Singaporean, and the organization had employed both Korean and Singaporese speaking coaches to aid in communication.

Forev leaves behind a short but memorable legacy with T1, as a potential start to a new era of Korean Dota 2. However, with his removal it’s likely T1 will now focus its efforts more generally on the SEA region.