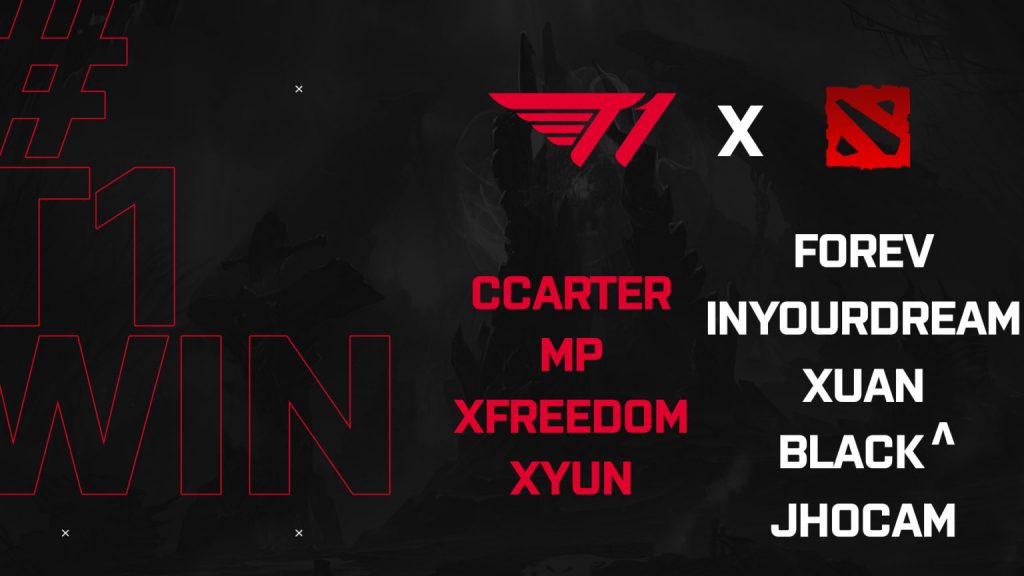 T1 have officially announced their full Dota 2 roster. This just a few short weeks after Valve announced plans for Regional Leagues in the next Dota Pro Circuit season. Up until March 3rd, T1 had only one confirmed Dota 2 competitor on their books – South Korean and former Team Secret and MVP player Lee “Forev” Sang-Don. Following a period of trial and error, the T1 roster is now complete, and the team will be competing in the SEA region.

T1 is excited to finally announce our new international roster for the @DOTA2.

On top of an international roster, T1 also proudly announced the support staff for the team. They will have three coaces on top of a tactical analyst. The Head Coach will be Choi “cCarter” Byoung-hoon, who was manager of T1’s phenomenally successful League of Legends team from 2013 to 2017. Alongside him will be two well-known faces in SEA Dota 2, former Team Secret and Fnatic carry Pyo “MP” No-a, plus old schooler Nicholas “xFreedom” Kelvin.

T1 Dota 2’s first outing since the official announcement will be in the qualifiers from March 13th – 15th for the One Esports Dota 2 World Pro Invitational Jakarta. They will be competing with Boom Esports, Oracle and Tyrants Uprising for the single SEA invite to the $500,000 event in April.

T1 formerly, known as SK Telecom, was a major protagonist in the booming Starcraft: Brood Wars scene in the early 2000’s, and was home to Lim “BoxeR” Yo Hwan, one of the most iconic Starcraft players in esports history. In 2013, T1 expanded into League of Legends, assembling a team that would go on to win three World Championships, solidifying their reputation as the best LoL team of all-time, and Lee “Faker” Sang-hyeok its greatest player.  T1 now field teams in Apex Legends, Fortnite, PUBG, Hearthstone, FIFA and Super Smash Bros Ultimate.