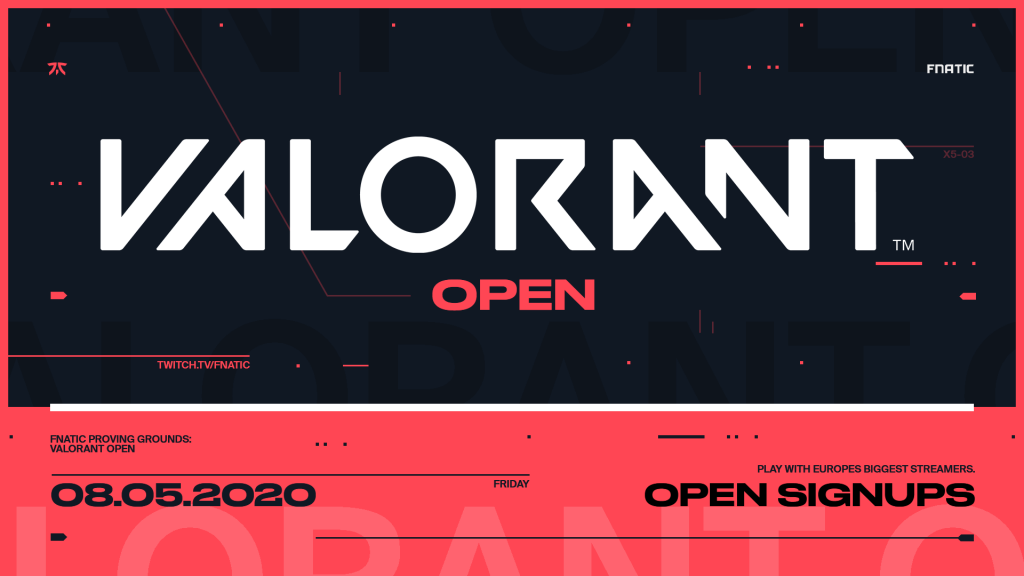 UK based esports organization, Fnatic, announced on Wednesday that they will be running the Fnatic Proving Grounds: VALORANT Open on Friday, May 8th. The single-elimination tournament will feature 32 teams from across Europe and will culminate in a best of three Grand Final. You can tune into the Fnatic Twitch channel to catch all the action starting at 4:30 p.m. PST on Friday.

We're entering VALORANT with the most competitive tournament Europe has seen. Introducing:

This Friday, prove you're the best by beating the best.

The closed-beta tournament will host a total of 32 participants with 16 coming from open signups. It is unclear at this time what teams will be participating, since over one hundred teams have already signed up for the open slots on challengermode. According to the terms and conditions, the tournament is open to teams made up of players in Europe who are over the age of 16. No prize pool has been announced at this time.

As far as the 16 slots not open to the public, Fnatic indicated that these slots will be filled with “Established talent and content creators.”

The tournament live broadcast will feature commentary from a number of notable tournament hosts, hailing from League of Legends, Overwatch, and other notable esports scenes. The on-screen talent will include:

There have been several small closed beta VALORANT tournaments featuring 8-16 teams over the past several weeks. Most recently, Gen.G won the T1 x Nerd Street Gamers Invitational, which featured eight teams, three of which were professional squads. Fnatic is looking to up the ante with their VALORANT Open, by gathering EU’s top talent in the largest competition pool yet to be assembled for a VALORANT community run tournament.