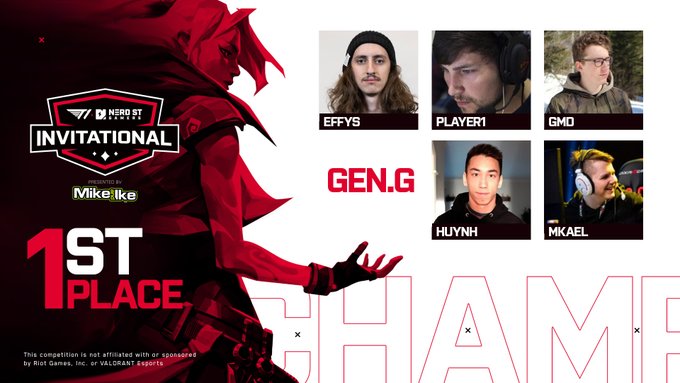 The new team on the block take it home.@GenG come out with the victory in NAIL-BITER Grand Final of the T1 x @nerdstgamers Valorant Invitational, presented by @mikeandike! pic.twitter.com/iwLzeNNnyX

Of the eight teams who attended, Gen.G and the Sentinels were the only professional Valorant teams playing in the tournament. Though to be fair, the runner up, Team Brax, was made up of three T1 pro players joined by CS:GO pros Tyler “Skadoodle” Latham and Jonathan “Elige” Jablonowski as fill-ins.

We can't start the competition without our own Valorant roster! @brax1wnl@AZKcs_@Crashies

Joining them are @EliGE and @Ska as they look to bring home the win! pic.twitter.com/WaoFAoYAXl

Although this tournament didn’t necessarily feature the highest level of competition, it was still a great preview to what we can expect from Valorant tournaments moving forward, at least in regards to production and commentary. The tournament was supported with high-level, seamless visual production and commentary was provided by highly respected esports broadcasters Chris Pucket and Alex “Goldenboy” Mendez.

A huge shout-out and thank you to @GoldenboyFTW and @MLGPuckett for absolutely crushing it with the cast. 👊

Let's do this again sometime!

During Monday’s tournament, Gen.G debuted their new roster, which was actually announced right before the tournament started. Their new roster is made up entirely of French Canadian CS:GO professionals who are looking to bring their tactical shooter skills to Valorant. Gen.G’s squad dominated their opposition in every round of the tournament. After going undefeated through the winners bracket and winning the Grand Finals in a 2-1 fashion, it’s safe to say that Gen.G’s new Valorant lineup made a great first impression.

The Sentinels also debuted their brand new roster at the tournament, though they currently only have four players so they played with a fill-in for their fifth player. The Sentinels made a splash last week when they announced that their new VALORANT roster would be headlined by Overwatch League MVP Jay “Sinatraa” Won. Although the Sentinels started their first match on Monday with a convincing win, they ended up losing to Team Brax in the second round of the tournament and were eliminated from the losers’ bracket by Team Shroud a couple of rounds later. The Sentinels tied for fifth place, which was not the impressive start the Sentinels were hoping for.

T1 and Nerd Street Gamers did an excellent job with their presentation of Monday’s competition. They featured great casters, invited awesome teams and personalities, and provided impressively polished visual production throughout the day. The success of this tournament shows that the competitive interest in Valorant is already substantial. Major esports organizations are already hosting tournaments and developing their professional teams, and Valorant still in closed beta. This game definitely has juice.