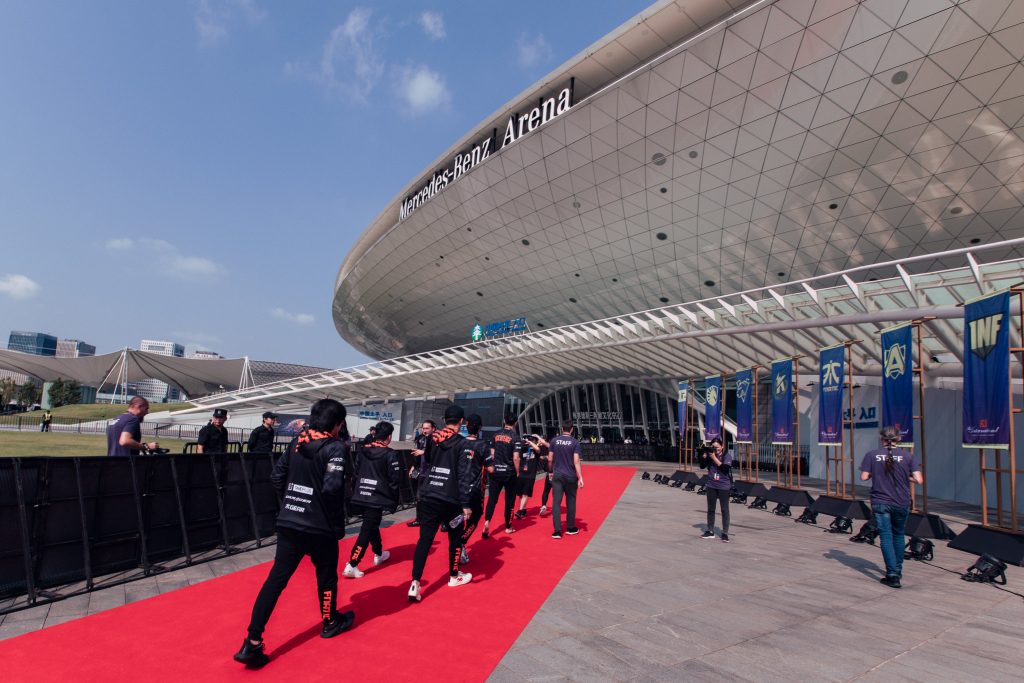 Fnatic warded off their usual demons, clinching a spot in the ESL One playoffs. (Photo courtesy Valve)

Fnatic can breathe a sigh of relief for now, as they have successfully staved off elimination from the Southeast Asian division of ESL One Los Angeles.

After having a rough start to their campaign, they seem to have solved their issues with composure and closing out games. In their series against Geek Fam on Wednesday, they were able to shut their rivals out in just two maps, proving that they are capable of not throwing entire matches away.

On the other side of things, Team Adroit punched their ticket to the grand finals by defeating BOOM Esports in three games. The Southeast Asian Games champions are now poised to put yet another trophy in their cabinet, but first they must wait for their eventual opponents between BOOM and Fnatic.

Leaving Nothing to Chance

Fnatic have long been notorious for crumbling under the pressure of having to close out their games, as is tradition when it comes to Southeast Asian teams. Despite almost always getting off to a good start in their matches, they tend to clown around a little too hard once they’ve established their advantages.

Not this time, though. Showing the professionalism that they know they’ve got, Fnatic crushed Geek Fam in their best of three series to clinch the playoff spot that nearly slipped out of their hands.

They blitzed through the first game with no mercy for their opponents. Winning every single lane certainly helped in this regard, as did the sheer tankiness and sustainability of their entire draft. Djardel Jicko “Dj” Mampusti was the start of the show in Game 1, netting 10 kills on his position four Phoenix. Him having the luxury to actually build a Dagon should tell you just how far ahead Fnatic were in the early game.

Absolute DOMINANCE by @FNATIC as they take the first game of the series 1-0 against @TeamGeekFam within 21 minutes!

They made good on the huge advantage that they were able to secure, pushing down objectives and keeping themselves focused. No nonsense was seen from them this whole time, and the concentration paid off with a 21 minute victory.

Game 2 wasn’t as simple for them, with Geek Fam fighting back on several occasions. Geek Fam held onto a small lead through the waning minutes of the laning phase, led primarily by Marc Polo Luis “Raven” Fausto on Lycan.

Unfortunately, his performance with the hero wasn’t enough to stop both Nuengnara “23savage” Teeramahanon’s Faceless Void and Kam “Moon” Boon Seng’s Void Spirit. The two were able to exert a ton of pressure on Geek Fam’s draft, sharking around the map to find pickoffs wherever they could.

Their opponents were unable to stop the bleeding through the mid game. Several teamfight losses later, and Geek Fam found themselves staring at a growing Fnatic net worth lead—which ballooned way out of their reach around the 30 minute mark. With nothing left in the tank, Geek Fam were forced to say goodbye to their chances at the playoff bracket, surrendering the game and the match shortly thereafter.

Fnatic thus end the group stage in third place, granting them a spot in the playoffs. They will face BOOM Esports in the first round, which will be a test of their skill and nerves after they lost to them last Sunday.

By taking out BOOM Esports three games to two, Team Adroit have completed their perfect run at ESL One in terms of matches. Their confidence and swagger are now on full display, and teams should rightfully respect them as the strongest so far.

Great fight by @AdroitDota taking down @boomesportsid heroes as this ends up being a disaster for BOOM!

Keeping it clean throughout the first game, Adroit never relinquished their net worth advantage despite losing a few engagements here and there. The map was theirs for the taking around the 35 minute mark, and they made sure to close it out just five minutes after.

Game 2 went in favor of BOOM Esports after Adroit’s Lycan pick failed to get off the ground fast enough to exploit the hero’s usual power spike. BOOM’s fantastic coordination made sure of this, as they were able to take teamfights on their own terms and finish Adroit’s heroes off without losing too many of their own.

A great initiation between Rafli Fathur “Mikoto” Rahman’s Mars and Alfi “Khezcute” Nelphyana’s Ancient Apparition at the 28 minute mark catapulted their advantage to the stratosphere. With the Arena of Blood keeping Adroit in and the Ice Blast preventing the Oracle from healing anyone, BOOM simply cleaned house. Adroit tapped out five minutes after, as there was nothing they could do to stop their opponents’ march.

They would not be denied in the end, however. Recognizing that the grand final berth was within their grasp, Adroit psyched themselves up for the third game and retook control of the series. Despite not getting much out of the laning phase as a whole, a spectacular performance by Mac as Razor leading to several teamfight victories allowed them to grab the game by the throat at the 20 minute mark.

It's looking great for @AdroitDota as they take down 4 of @boomesportsid 's heroes in one fight!

Though BOOM would resist defeat for a few more minutes thereafter, another strong teamfight from Adroit at 30 minutes would quash their hopes and dreams of a comeback. With control over the entire map on their side, it was only a matter of time until Adroit barged into BOOM Esports’ base, forcing them to call gg and surrender the series.

Adroit have earned themselves some much-needed rest as a result, and they will wait for their opponents in the grand finals in the meantime. BOOM and Fnatic will have to fight tooth and nail for the last grand final slot, and that is one matchup that is sure to excite fans of SEA Dota.

Stay tuned to Hotspawn for updates on the ESL One Los Angeles SEA playoff schedule, and for our coverage of the playoff games themselves!