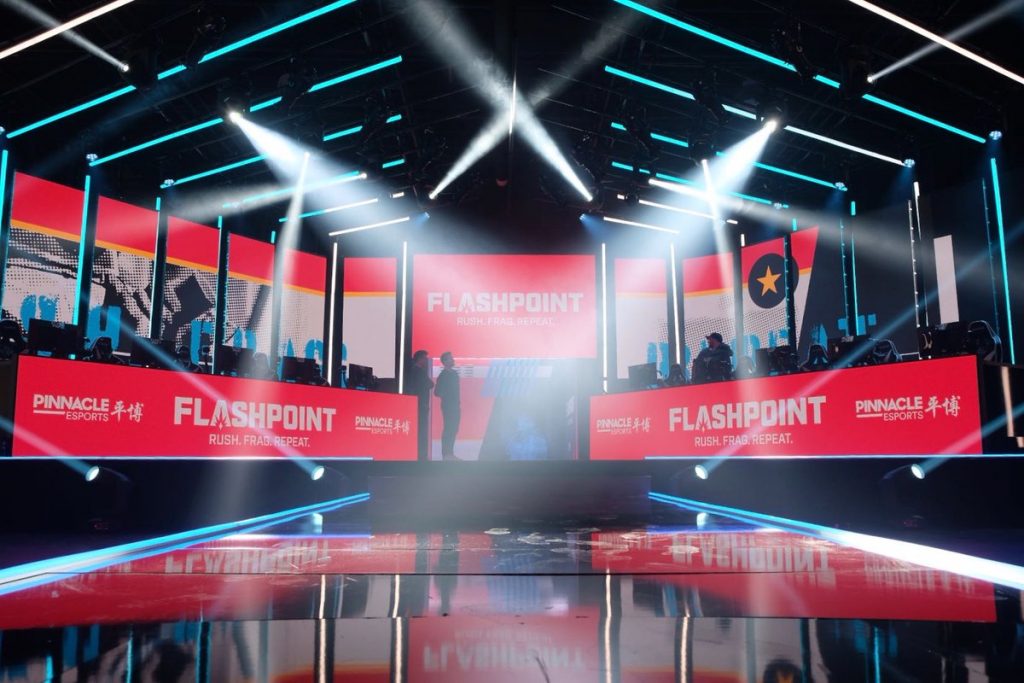 MAD Lions, Cloud 9 and MIBR each won their respective groups at Flashpoint (Image via MAD Lions)

The Flashpoint 1 Group Finals was all that stood between the conclusion of phase one and the group stage reseeding.

Throughout the last few days, teams have been preparing to take on their remaining opponent. The reward at the end of the tunnel is the opportunity to be the group leader on Thursday’s group stage re-seeding.

In Group A there was the battle for Scandinavia, with the Danish MAD Lions taking on Finland’s HAVU. In Group B, the rematch between MiBR and Chaos. With Cloud 9 and Orgless going at it for Group C. It was a long day of counterstrike actions, and some had some close maps with others showing their dominance over their competition.

The Danes Take Control Over Scandinavia

The first series of the day kicked off with MAD Lion’s Mirage pick. The Scandinavian rosters battled back and forth as each team had their turn at beating each other. MAD Lions pistol round allowed them to get early momentum against Havu’s defensive strategy. Eventually, Havu’s Finnish side locked them down for a three-round spree. The story of momentum shifts flirted the first half as it was MAD Lion’s 9-6 lead that won the half in the end.

But the heartbreak came when MAD came into the CT side. MAD showed Havu why they wanted Mirage. After the first few successful Havu rounds, the Danish dug in and fought back the Finns. In one round, Havu set up a full smoke wall on A site. Whilst this move was effective for denying MAD’s riflers holding the site, it failed to stop Frederik “acoR” Gyldstrand AWP at ticket. The smoke lined up well to make him push forward for information, making him vulnerable. Despite this exposed nature, his aim carried the bleak situation with an amazing ace. From that momentum, MAD’s destiny was certain. Mirage finished 16-10 in favor of MAD Lions.

Train opened with an explosive pistol round. MAD somehow managed to win what should have been a lost round. Instead, MAD was granted an opportunity to take a few round wins. However, Havu remained competitive in what should have been a tilting round. Joonas “doto” Forss came in clutch with the double deagle clutch as he was the bomb’s guardian angel. With the anti eco successful HAVU rolled it into three round wins. MAD regained composure, with three wins for themselves. The tug of war didn’t stop there, as MAD Lion’s CT half only ended 8-7.

With MAD rolling a weak CT half on Train, it seemed like HAVU was going to take this map. Despite this being the logical conclusion on Train, MAD somehow managed seven round wins in a row. HAVU had no answer for their onslaught. It took them eight rounds into the second half before their CT side found success. By that point, MAD’s confidence had already taken over the game in their favor. The Danes sealed the deal the following round and the Dane Law was once again in play after their 2-0 series victory.

MAD LIONS COME OUT ON TOP! 🏆

THEY TAKE THE SERIES OVER HAVU 2-0 AND WIN THE GROUP OF IN GAME FEEDERS! @HAVUgaming 8 – 16 @MADLions_CSEN

Cloud 9 Edges Out a Close Final

The Cloud 9 and Orgless series began with Orgless’ Train pick. Off the bat Cloud 9’s Aran “Sonic” Groesbeek pistol ace. Although, the ace didn’t translate into domination from C9. Orgless got themselves back into the half by the third round, taking them to six back-to-back round wins. The back and forth game returned as Cloud 9 also won back to back rounds. The half ended 9-6 for C9’s attacking half.

With Train being primarily a CT sided map, this felt like it was heading to a C9 victory. This was exactly the case as Orgless’ attacking side found very few answers. Orgless’ pistol round bought them some time, but it soon ended. The rotation game failed to do much for Orgless in Cloud 9’s gun rounds, especially with Johnny “JT” Theodosiou solidly holding pop dog across rounds. Cloud 9’s successes on the CT side allowed them to take Orgless’ map pick 16-11.

With Orgless losing their map pick, it was their time to take Cloud 9’s. Pujan “FNS” Mehta’s In-game leading had the roster well prepared for C9’s attacking side. C9 only got a few odd rounds here and there on the half. Round after round, Orgless managed to successfully wipe out C9’s roster. The most interesting account of this is no member of the Orgless squad had a standout performance. The kills were fairly spread out across the Orgless players, with very few deaths for each player. Orgless’ game plan was the star power here.

Moving onto the new half, Orgless demonstrated their dominance over the pistol round as they continued to snowball their lead. It seemed like Orgless’ tactical gameplay was surely going to result in a strong victory. Despite this, Cloud 9 had their CT-side Inferno strategies ready. Orgless got a taste of their own medicine, as C9 ran away with round after round. The pressure was mounting for Orgless as the tables had turned. In one instance a 4 man push onto A with FNS lurking from B to CT spawn was Orgless’ play. A site turned into an easy defence for Cloud 9 with only FNS’ lurk remaining. In the closing dual of that round, FNS whiffed his pistol duel in close quarters, really showing how it was getting to them. Eventually, Orgless found some luck and took the map 16-11.

CLOUD9 ARE REALLY FIGHTING TO HOLD ONTO THIS MAP!@Cloud9 11 – 15 Orgless

As both teams traded map picks, it was onto the decider. Orgless carried on their tradition of winning pistol this series as Matthew “Wardell” Yu gained a triple kill. With the money on the AWPer, it seemed like Orgless off to a solid start. The momentum only carried so far though, as C9 composed themselves with another gun round victory translating into their momentum. With the score reaching 4-4. Cloud 9 savaged the half with Orgless’ CT side failing to gain any more rounds on the half. Cloud 9 gained 11 rounds in a row and looked to close the map convincingly.

But the storyline of Inferno transitioned to this map. Orgless’ T-Side was just as convincing as Cloud 9’s. Orgless brought the lead back to 10-10 before they found themselves positive in the map. This work primarily came off the back of Jaccob “yay” Whiteaker’s solid performance. From there, the game got sloppy. The pressure on Cloud 9 grew as the map grew closer to its finish. It took Cloud 9 two back-to-back timeouts before they figured Orgless out. Sonic’s awping secured them a round where his double kill from CT Spawn allowed C9 mid control to rush Orgless’s B site plant successfully. With the game back on, it was a total scrap with C9 managing to edge the map 16-14 with a Molotov kill.

With that victory, Cloud 9 is your Flashpoint Group B champion and will go into the reseeding show as a leader.

MiBR’s Overpass stared the series and the match was a complete stomp. The opening T half for MiBR had them fragging Chaos to an incredible lead.  Chaos played a brute aggressive style, which failed to really make an impact across the half. This is especially strange tactic since Overpass CT side is rather dominant. In one instance Joshua “Steel” Nissan managed to get some awp kills on B site, which lead to a round win, but the momentum was gone the round later.  In addition, Fernando “fer” Alvarenga played so well on the T side that it was almost impossible for Chaos to catch a break. Although, a few tactical mistakes did make Chaos win two rounds they had no right to win. The half ended 10-5 in favor of MiBR.

On the return side, MiBR had such a good showing. The fragging power experienced throughout the MiBR the half before translated. Only this time fer became quiet as Gabriel “FalleN” Toledo and Vito “kNg” Giuseppe stepped up their aim. Chaos continued to be battered, and it really showed in round 19. fer’s flank onto Chaos who were in toilets at the time made it so Chaos were trapped. Whilst Steel managed to trade fer for his ally in toilet, the anvil was already in place with the hammers of A site and connector gaining the killing blow. MiBR won their map pick 16-7 in crushing style.  A fitting way to give Chaos their first map loss all tournament.

Inferno got a bit spicier as Chaos really did give it their best. Whilst MiBR opene the map in a repeating fashion of 5-0 lead. It was soon to be them scrapping from behind. Chaos on the halfway point came back to the MiBR’s defensive strategy and ended up toppling the Brazilians to a 8-7 lead at half.

Chaos started the other half strong as Cameron “cam” Kern and Hunter “SicK” Mims lead the charge with a strong pistol round. MiBR had some moments, but they were not enough to really halt the gains Chaos made.  But, MiBR rallied and made it 11-11 at one point, but Steel’s in-game leading turned into omniscience. MiBR’s player movement was tracked well, resulting in failed attacking pushes. In the final round, MiBR made a force buy almost work, right until FalleN missed key shots. Chaos had tied the series 1-1.

Chaos got absolutely banged out by MiBR’s attacking half. There’s not much to say other than the fact MiBR was firing on all cylinders. MiBR only found resistance in the final few rounds of their T side. Logan “Voltage” Long made a nice move on A site to really shutdown MiBR’s attack. This gave them some breathing room, but it wasn’t enough. Things looked bleak for Chaos as a 12-3 deficit was facing them on the T side.

On the flip side, Chaos had an incredible B site offense. The only thing that really slowed their momentum was Epitacio “TACO” de Melo, who made such a strong play at CT mid to halt Chaos progress. The following round he managed to gain a free kill by spraying through the smoke at CT mid door. These plays won MiBR two rounds alone, which really heightened the pressure for Chaos. A tactical pause the round alter exposed their dwindling mood, and there were no improvements from there. MiBR closed the series 2-1 with a 16-8 win on Dust II. MiBR had gained their revenge after facing a 2-0 defeat to Chaos in the opening round.

Flashpoint 1’s group stages is scheduled to be redrawn on March 26. Expect the usual drama and the groups format, with the addition of updates storylines and a new tier list forming.