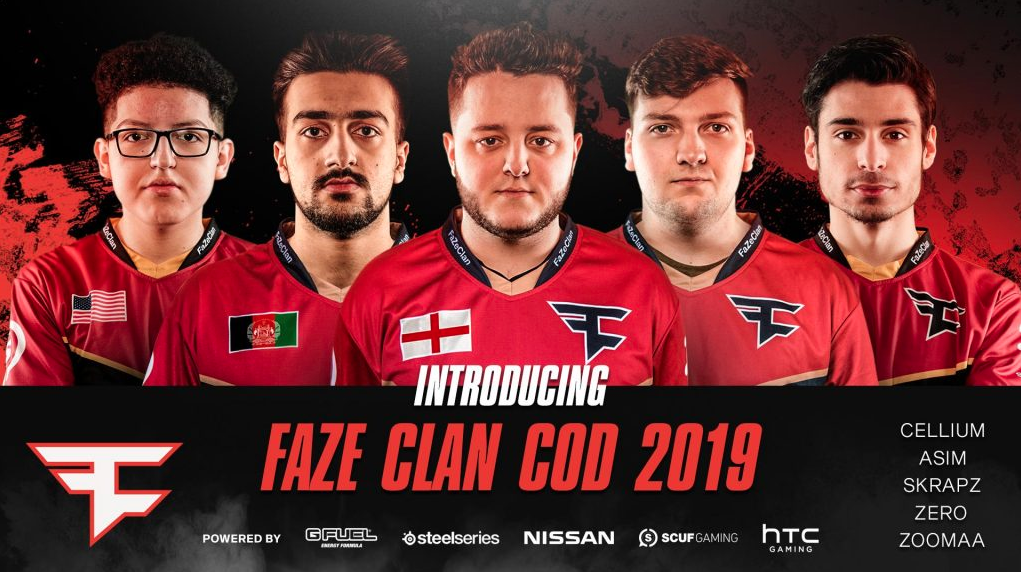 FaZe Clan recently announced the organization is re-entering the Call of Duty World League for the Black Ops 4 season. The organization that will be departing is Red Reserve, though two of that team’s players will join the new FaZe Clan roster. Effective immediately, FaZe Clan will hold Red Reserve’s license to the remainder of the CWL Pro League for the 2019 Black Ops 4 season.

The two players who have been transferred from Red Reserve to FaZe Clan are Trei “Zer0” Morris and Matt “Skrapz” Marshall. Zer0 was on Red Reserve for almost two years and has been performed at the highest level. Skrapz has been a breakout superstar, elevating his performance to become one of the world’s best. At the recent CWL Fort Worth 2019, Skrapz achieved the eighth highest rating out of all players, achieving a 1.25 rating with a 1.20 Kill/Death ratio.

Zer0 is expected to be playing in the main Assault rifle role, which is a role he has played before on his former team, Splyce. With that squad, he was able to win the CWL Global Pro League 2017 Stage 1.

Skrapz will continue his slaying Assault Rifle role using the Maddox in order to elevate his presence on the map. Moreover, as Skrapz is currently one of the best in the game, it would be wrong to remove his best weapon.

Joining Skrapz and Zer0, will be Obey “Asim” Asim, Thomas “ZooMaa” Paparatto and McArthur “Cellium” Jovel. These three are already under the FaZe banner (ZooMaa is OpTic Gaming’s substitute but is still contracted to FaZe). Due to FaZe initially failing to get into the CWL Pro League at the Qualifier, this meant that FaZe would enter the amateur bracket of every LAN event. Due to this, FaZe transferred Cellium and Asim to their FaZe Black roster, with ZooMaa filling in for OpTic Gaming’s Brandan “Dashy” Otell for a brief stint in the CWL Pro League, before later joining Asim and Cellium on FaZe Black.

ZooMaa is expected to fulfill the Submachine gun role, with Cellium joining Skrapz in the slaying Assault rifle role. Asim will also be running the submachine gun. These three are extremely fast players and can pair nicely with Zer0’s map control.

There is no doubt that this roster has serious talent. Asim, Zer0, Skrapz, Cellium and, ZooMaa are all prolific and talented Call of Duty players with a plethora of event wins between the five of them.

However, because of the regional differences on the team, it comes down to whether this team can gel as a new squad, as it is always difficult to play with a brand new team.

Moreover, it’s even more difficult to play top-level Call of Duty when they are going to be thrown into the deep end against teams who have been practicing as a five for a lot longer than them.

However, this team is incredible on paper, and I will expect this team to place relatively high in the upcoming CWL London 2019 from May 3-5.

You can watch all of the action from the Call of Duty World League London event on twitch.tv/callofduty.

Call of Duty
Share
George Geddes
George is a freelance esports journalist that has a particular interest in FPS esports. He is currently majoring in philosophy in order to enhance his analytical and writing ability.
Follow me