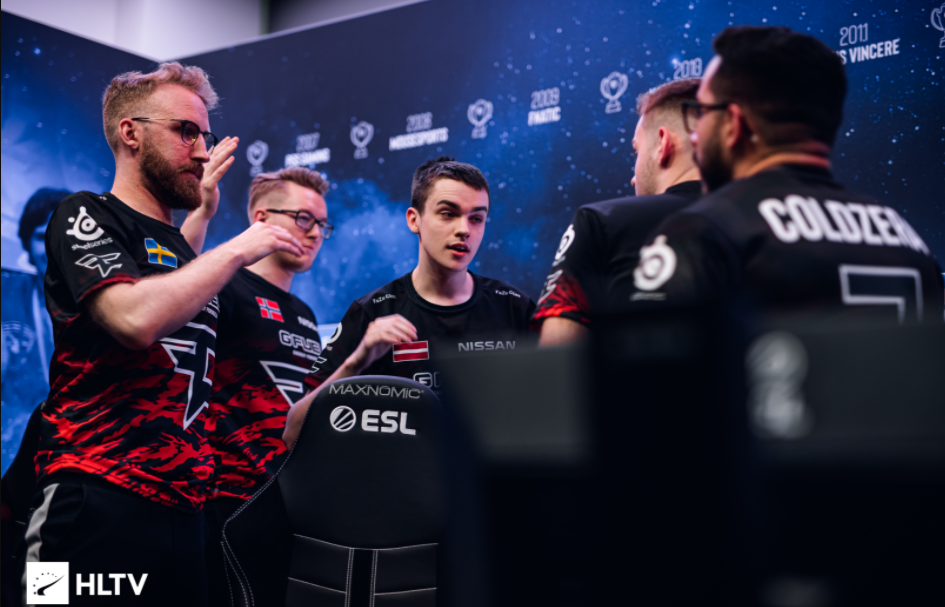 FaZe Clan have completed their undefeated run through Group B at Road to Rio Europe. (Photo courtesy HLTV)

The European side of ESL’s Road to Rio has been full of twists and turns. Instead of the 12 teams fielded in North America and CIS, Europe played host to 16 total teams. Since they were split into two groups of eight, seven total matches were needed for a complete round robin. After two and a half weeks, the standings are solidified with Astralis, FaZe Clan, Ninjas in Pyjamas, and G2 Esports earning the upper bracket spots.

Falling by the wayside were the likes of Fnatic and mousesports. Both teams were considered to be some of the most promising prospects to win the event, let alone just make playoffs. Unfortunately for them, they will both be watching from the sidelines. Coupled with Na’Vi’s failure to advance out of groups in the CIS region, three of the four top rated teams in the world have been eliminated from Road to Rio.

Fnatic were in Group A and right away it was apparent that something was wrong. They fell 0-2 to ENCE in their first match, but then took down Astralis 2-1 in their second. Fnatic then gave Dignitas their only win of group stage in their third match. Inconsistency plagued this squad throughout groups, and it ended with them at a 3-4 record in 6th place.

Mousesports in Group B were a similar story. They got swept by the likes of Movistar Riders and North right off the bat. Mouz still had a chance at playoffs after taking down G2, but then fell to GODSENT in embarrassing fashion in their second to last match. A close spoiler win against Copenhagen Flames to keep them out of playoffs would only serve to give mousesports’ misery company.

Onto the successful teams, Astralis and FaZe both looked great in their Group Stage campaigns. In Group A, Astralis took the slow but steady approach. Their first match against Complexity got to three maps, but the Danish squad closed it out. Fnatic then handed Astralis their first and only loss in the group. After that, Astralis kept to their winning ways, albeit cutting it close sometimes.

Their matches against NiP and ENCE in particular were tight. Astralis had to reverse sweep the Ninjas in their middle match to get the all important first seed tiebreaker. The final day also came down to the wire when ENCE were just one round away on Train from 2-0’ing Astralis. Instead, the Danes pulled it back in overtime then won the third map of Inferno 16-11 to secure the number one spot.

FaZe Clan had a similar trajectory, beating up on the more powerful opponents but dropping maps here and there. Unlike Astralis however, FaZe managed to stay undefeated with a 7-0 record. In FaZe’s seven matches, they lost maps in three of them. Interestingly, North, Movistar Riders, and Copenhagen Flames were the teams that made them bleed.

Even so, G2 and c0ntact got very close. In their second match, FaZe and G2 played three overtimes. Both maps came down to the wire, but FaZe was more clutch on the day. They took Mirage 22-20 and Dust2 19-15 to complete the nail-biting 2-0 sweep.

FaZe Clan’s final match against c0ntact was purely for pride as FaZe had locked first seed at 6-0 and c0ntact had been eliminated at 0-6. After a blowout on Inferno, c0ntact also took FaZe to OT on Dust2. However, this one would also end in a 19-15 for FaZe Clan.

Right behind our group leaders were NiP and G2. However, NiP and G2 had very different experiences in their respective groups. NiP were looking nearly as dominant as Astralis. The new young Swedish lineup took down every team except Astralis, though with a very interesting caveat. Of NiP’s seven matches, only one resulted in a clean 2-0 victory. Despite having six 2-1 results, NiP actually had a better round differential than Astralis.

The Ninjas had tons of blowout maps. Their first match against Vitality featured a 16-12 and a 16-4. After going to overtime in both of their first two maps against ENCE, NiP ended it with a 16-5 on Inferno. Lastly, they reverse swept Heretics with a 16-3 and a 16-4. All of those matches featured a lost map. Even so, a 6-1 record has them in second place, just losing out to Astralis via head to head. They still have earned a ticket straight into Upper Bracket Semifinals and a minimum top six finish.

G2 had a much rougher time in group B. After falling to FaZe Clan in their second match, the French-Serbian squad barely snuck by Copenhagen Flames after going down a map. A win against Movistar Riders put G2 in contention for first seed, but then they came across mousesports in the one game they decided to play well.

A 3-2 record still had G2 in pretty good position. One win against c0ntact later and they had qualified barring any disasters. Still a disaster nearly came to pass. On the final day of matches, G2 came up against a North squad playing with their coach standing in. They needed a win to qualify for playoffs, so they were ready to put everything on the line. Shades of the cs_summit 5 finals showed themselves as G2 lost in heartbreaking 2-1 fashion.

On another stream, the Copenhagen Flames took map one against mousesports then held a 15-9 lead on Nuke in the second. If the Flames completed the 2-0 sweep, G2 would have been knocked down in the standings, potentially all the way to 5th outside of playoffs. Fortunately for G2, mousesports repaid them for their first win by coming back and taking the series 2-1. Although it was messy, G2 earned second seed off of a three-way 4-3 tie.

Bring Up the Rear

The last four teams who will be fighting through the Lower Bracket are Vitality, Heretics, North, and GODSENT. As previously mentioned, North and GODSENT qualified from Group B at the end of a three-way tie with G2. Both squads have been showing a lot of promise and will hope to go far.

On the Group A side, Vitality swept Heretics on the last day to complete their 4-3 record and solidify a third seed finish. Now at 3-4, Heretics needed help from Astralis and NiP to keep their competition at three wins. Luckily for them, those needs came through as both matches ended 2-1 for the top teams. The three-way tie for the final playoffs spot went to Heretics, as they took a map off of Fnatic in their loss and swept ENCE in their win.

Road to Rio Europe’s playoffs begin on May 12th with Team Vitality vs GODSENT and Team Heretics vs North. The day after, Astralis will take on G2 while NiP have FaZe Clan to worry about. The most unexpected European event of the year is just getting started.