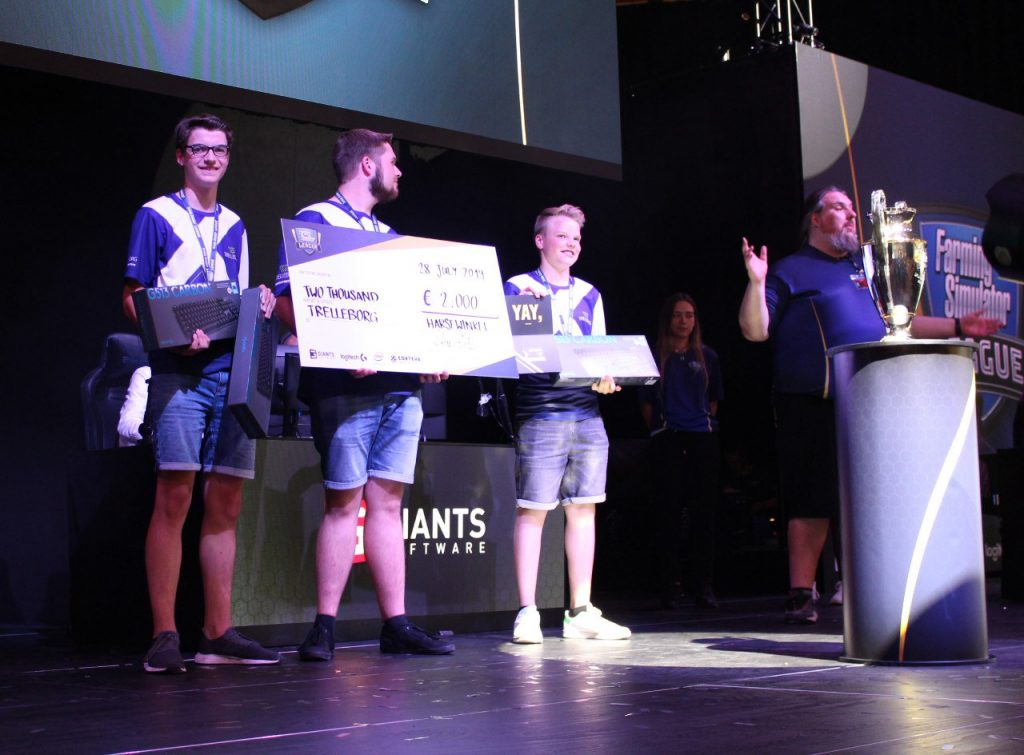 This past weekend the Farming Simulator League had its inaugural tournament to kick-off their 2019/2020 competitive season at FarmCon 19. This tournament took place in Claas, Harsewinkel, Germany and featured 26 teams competing for their portion of the 12,000 (euros), circuit points, and the honor of becoming the first winners in the FSL. It was a competitive weekend that featured thirteen seeded teams competing again thirteen Wild Card team for in the fields. With this wholesome grassroots, excuse the pun, esports league having completed its first big tournament of the season, we thought we’d take the opportunity to talk about the tournament and the big wins we saw this weekend.

There were some big upsets this weekend but the one that left everyone shocked was the series between SDL by Logitech G versus Trelleborg. Now Trelleborg came into the 2019/2020 circuit with experience under their belt. The team originally played under the name “Agrartechnik Oberpfalz,” which was a Wild Card team last year and placed second at The Herofest in Bern, Switzerland. Immediately after they got picked up by Trelleborg and have been playing under that name since. And to say that they had experience is an understatement.

In the match against SDL, Trelleborg shocked everyone with a surprise rush, denying SDL the opportunity to even PLAY the game. It was probably one of the coolest strategies I’d seen all weekend, and they definitely deserved an MVP for that play. In an interview after the game, Felix from Trelleborg told Lars that, “They decided to go for rush because they had no other way to beat SDL. We either had to rush it or we lose”* This high-reward, high-risk play afforded them a semi-final match-up against Krone. Trelleborg seemed to have a very relaxed and casual approach to the game, despite their use of the rush strategy three times over the course of the weekend. As a team, Trelleborg focused less on having exact plans. Felix said that they’ll “figure it out while we’re on the stage.” Trelleborg’s performance and first-place win has definitely cemented themselves as the team to beat in the FSL.

Congratulations to Team Trelleborg who took the first Prize in the first @FSLeSports Tournament at #FarmCon19! pic.twitter.com/EkN0WcM8bn

If you didn’t have time to watch the whole tournament, at least catch the clutch game between SDL and Trelleborg.

Seeing as it was FSL’s first official esports tournament, we paid attention to how this growing esport found its footing. The structure of the tournament was really well-executed with good breaks between the matches, adequate time for teams to get ready for the matches, and it was divided amongst the two days so that the teams weren’t playing 10-12 hour days. What was really commendable was the two English casters who were fantastic at breaking down the plays for the less agriculturally gifted esports fans and the great post-game interviews.

While the game on the surface seems simple, the nuances of the game can be intimidating for new fans of the game. This potentially off-putting problem was averted by having two good casters who had Farming Sim knowledge and were casual enough to not put off anyone brave enough to check out this new esport. Both English casters Joe “Silvernewstv” Barnes and Paul “Mr.Sealyp”  Paul had a wealth of knowledge that they integrated beautifully into their play-by-plays. And while neither of them are the stereotypical “hype caster”, they played up the big plays well!

And our English #FSL casters, streaming live on Twitch and Mixer are Joe from @realSilverNews and Paul aka @MrSealyp Tune in! pic.twitter.com/42SOsrgrB1

In addition to the casters, Lars “Listeran” Malcharek was the host for the event and he conducted the winner interviews after each round. For the English-speaking audience, the interviewees were each asked their questions in German and then their answers were translated to English immediately after by Lars. If we were to becritical about the interviews, more lighting and having the player’s name across the screen during the interview would’ve helped fans on Twitch know who they were listening to. Maybe in the future, Lars will venture into doing the dreaded loser interviews for a more comprehensive look into the players of the FSL.

Seeing as FarmCon 19 was FSL’s first event, I was impressed with how well it went. There weren’t too many issues aside from a small-time delay, a few lighting issues, and the need to tweak the U/I to make it a bit friendlier for users at home. And if there’s anything I’d like to see more of in the future, it’s definitely more teams having theatrical entrances like John Deere who literally rode on their machines.

I’m really looking forward to watching their next tournament on August 10-11, especially considering that it’ll be an online tournament which means they’ll need to figure out how to transition from offline to online content.

*quotes are translated from German to English by Lars.

Other
Share
Gillian Linscott
Gillian is Hotspawn's Communication Manager. She is also a lifelong gamer with a habit of getting distracted by random side quests, falling in love with fictional video game characters and forever buying wards as a position 5 in Dota 2. You can normally find her watching far too many Twitch streams to be human and rambling about esports community issues with a cup of coffee in hand.
Follow me