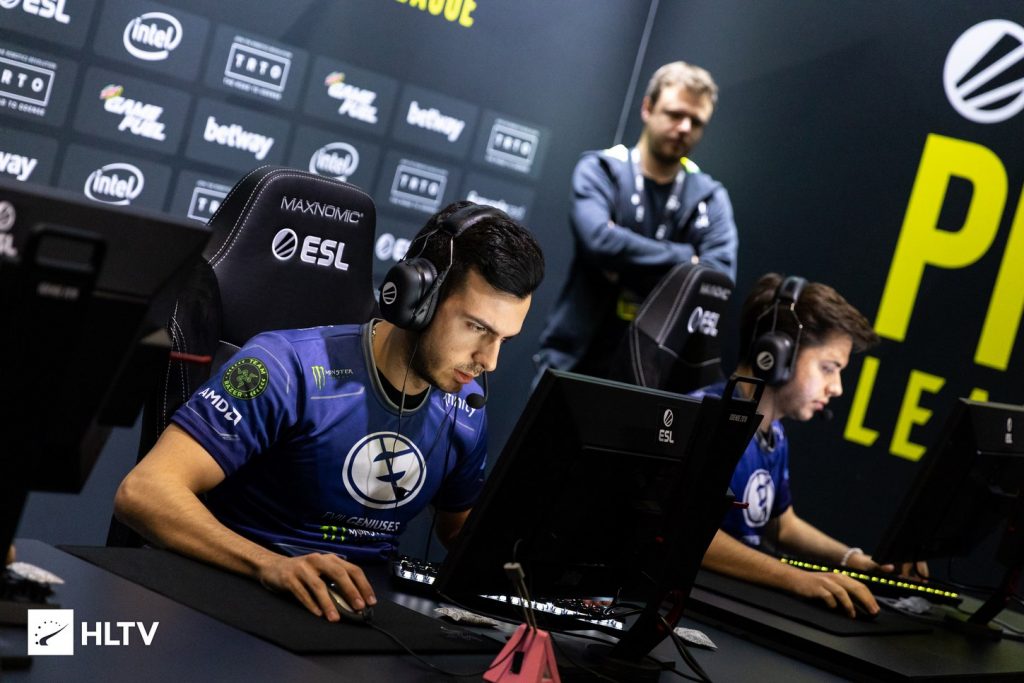 North America’s side of the ESL Pro League Season 12 Group Stage has completed. The eight teams who entered the ring have been cut down to just four. Evil Geniuses has taken first place after earning a 6-1 record. Right behind them are FURIA and Team Liquid at 5-2, the former of which got the last Upper Bracket spot via head-to-head. Lastly, 100 Thieves have won the tiebreaker against Chaos Esports Club to secure the final playoff spot.

Watching EG’s trajectory throughout the Group Stage has been very interesting. The highest ranked NA squad in the world (currently third) started off with a flawless week one and two. Coming into week three, EG had one of their two biggest threats in FURIA up first.

Map one was Nuke, courtesy of EG. Despite Nuke being EG’s most played map in the past month, it is also one of FURIA’s best maps as well. The Geniuses did get off to a hot start on the T side thanks to a 1v3 clutch out of Peter “stanislaw” Jarguz in the pistol round.

FURIA quickly fell to a 1-6 deficit before the team finally stood up. With Henrique “HEN1” Teles and Kaike “KSCERATO” Cerato leading the way, FURIA managed to win the last eight rounds on their defense. HEN1’s domination continued on the T side as the Brazilian squad tore into EG. HEN1 put up a complete carry performance with a 29-11 K-D ratio, 109.7 ADR, and a 1.98 HLTV rating. FURIA finished the 16-8 victory with seven straight round wins.

FURIA’s map pick of Inferno was a lot closer. The first four rounds went to the Brazilians before EG responded with four of the next five. However, FURIA was able to blast ahead at the end of the half, taking a 10-5 lead from the T side. They won the second pistol as well, putting themselves firmly in the drivers’ seat.

EG did their best to fight back on the attack. Tarik “tarik” Celik put up 16 kills and 107.9 ADR as the Geniuses found their way back into the game. After nine of the middle eleven rounds all went to EG, the score was tied at 14 apiece. At this point, FURIA put their foot down and found the last two rounds to take the 16-14 win and the series sweep.

Although EG lost this match in 0-2 fashion, they were still in position to earn a top two finish. Additionally, this match contained two of just three total maps that EG lost all Group Stage. EG’s next two contests were against Chaos and Triumph, two teams who were not slated to make playoffs.

The Geniuses did manage to 2-0 sweep Chaos, although they showed weakness again on Nuke. Chaos nearly managed to pull off the upset on the map, but were denied at the final hurdle and lost 14-16. The underdogs were then no match for EG on Inferno. A 16-4 victory for the Geniuses secured their fourth win.

Against Triumph, Nuke would once again be a struggle for EG. After stealing Triumph’s Inferno pick 16-9, EG were looking for another clean sweep. Despite taking an 8-7 lead from the T side, they were unable to close out the map on defense. Triumph ended up taking their third map win all Group Stage 16-12. EG found the 2-1 victory with a 16-10 on Train, but Nuke is going to be a spot of interest for them in the playoffs.

The final day of games played host to one incredibly important match. Evil Geniuses faced off against Team Liquid for a spot in the Upper Bracket. Since FURIA held the tiebreaker over both, winning was a must. Coming into the match, Liquid’s last win against EG came at the ESL Pro League Season 11 Finals with EG coming out victorious in their past five meetings.

The teams started out on Liquid’s Mirage. Liquid were slow out of the gate, going down 1-6 from their T side. They did speed up as the half went on. Although a 6-9 deficit was not ideal, the map was still within Liquid’s grasp. That was until EG’s offense took the field. Once the Geniuses got their guns, they were nearly flawless. Liquid could do little to staunch the bleeding as EG won seven of the last eight rounds to take a comfortable 16-9 victory.

Inferno was hardly any better for Liquid. EG opened up their T side with five quick rounds to their name. Liquid once again found themselves at a 1-6 deficit which they again managed to turn into a 6-9. This time however, they didn’t have the luxury of a second pistol round win thanks to stanislaw and Vincent “Brehze” Cayonte on the Banana defense.

From there, it was a slow bleed out for Liquid. Keith “NAF” Markovic tried to keep his team in the running with some clutch plays, but it wasn’t enough. A stanislaw 3K in Mid was the nail in the coffin for Liquid as EG took the 16-12.

With this result, Evil Geniuses and FURIA were confirmed to be the top two finishers of the ESL Pro League S12 Group Stage. Interestingly enough, Chaos found an improbable 2-1 upset over FURIA later that day. The match ended up not mattering as FURIA had a tiebreak over Liquid and 100 Thieves easily dispelled Triumph to keep their lead over Chaos.

The final four squads at ESL Pro League Season 12 have been locked in. Unlike Europe who have a one week break, North America will be jumping into the playoffs incredibly quickly. Matches begin on September 24th with the Grand Finals taking place on the 27th. The matchups for round one are:

The four highest rated teams in the region will be going head to head for the top prize of $60,000 and a bevy of ESL Pro Tour and BLAST Premier circuit points.