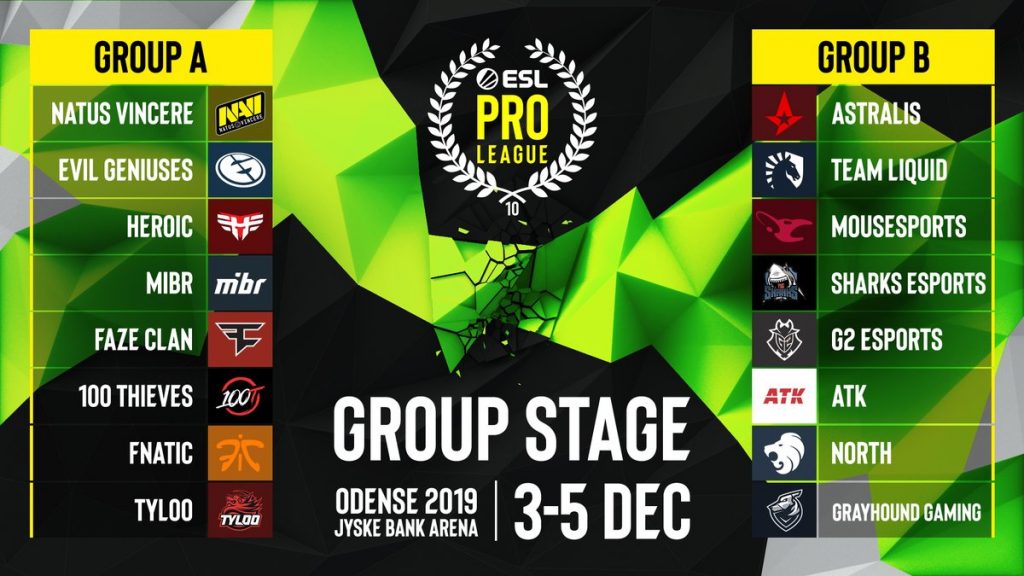 This year’s ESL Pro League Finals will feature a $750,000 prize pool and a notch towards the Intel Grand Slam award (Image via ESL)

The highly-anticipated ESL Pro League Season 10 Finals is now just mere weeks away. After a long spell of teams across the Americas, Europe, Oceania and Asia quarreling for one of the 16 slots, tournament officials have revealed the groups and opening matches.

This year’s ESL Finals will feature a $750,000 prize pool and a notch towards the Intel Grand Slam award. All four of the teams currently on the leaderboards for the Grand Slam will have a chance at gaining the lead with a win at the Odense Congress Center between December 3-8.

The groups are as follows:

The first group is undoubtedly top-heavy with five HLTV Top 10 teams as opposed to Group B’s two. 100 Thieves, Evil Geniuses and Na’Vi are favorites to survive the group with serious threats in the form of Heroic, MIBR and FaZe Clan, who saw a resurgence at IEM Beijing. The skill range is tight between the teams in Group A and should leave plenty of room for excitement.

Astralis and Liquid will headline the second group, while G2 and Mousesports will likely be battling for the third slot to berth into the playoffs. North and Grayhound are wildcards in this group with a chance at shaking up the status quo if they can manage a playoff appearance.

The group stage will begin with a best-of-one match prior to splitting into an upper and lower bracket. In the bracket stage, teams will skirmish in best-of-three conditions until the top six are set for the playoffs.

The opening matches on December 3 will see: