Erster: I want to show I am the best Doomfist in the world 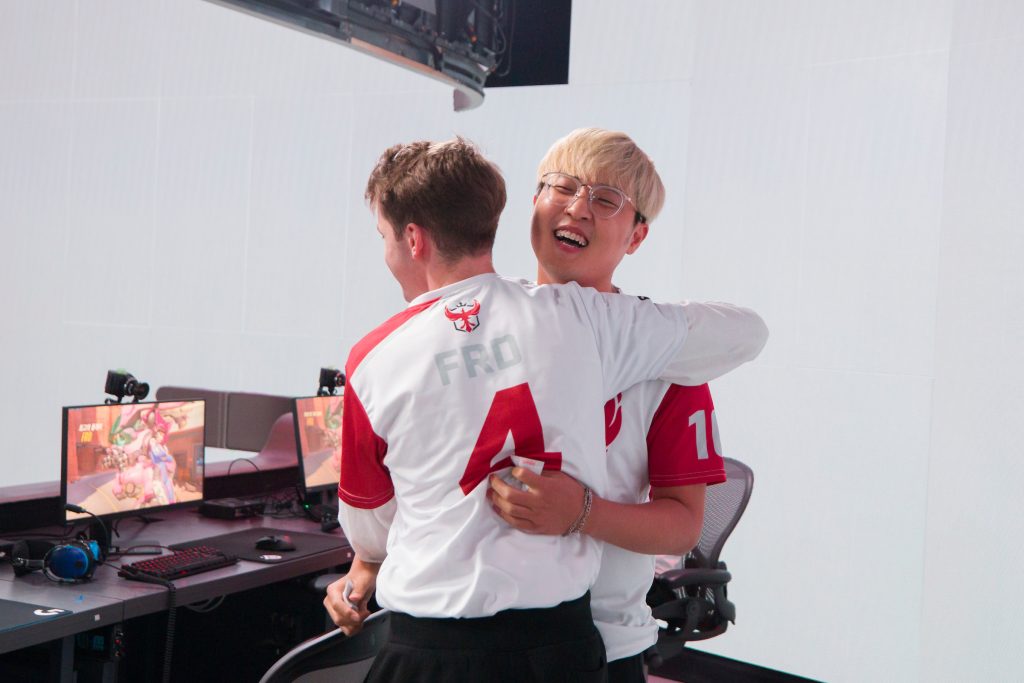 Post-game celebration between Erster and frd of the Atlanta Reign. / Photo: Robert Paul for Blizzard Entertainment

The Atlanta Reign were able to knock the London Spitfire out of their top six place after an incredible 7-0 Stage 4, characterized by DPS player Joon “Erster” Jeong’s dominance and broad hero pool. The Reign started Playoffs off strong, providing one of the greatest upsets in OWL history in their 4-3 victory over the favorited San Francisco Shock. However, they were unable to defeat the New York Excelsior in their second match and were sent down to the losers’ bracket.

In order for the sixth- seeded Reign to make it to the Grand Finals, Erster and his incredible Doomfist will have to punch through the Hangzhou Spark, the winner of the Shock vs. Gladiators matchup, and the loser of New York vs. Vancouver. The road to Philadelphia is long and difficult, but Erster shared with Hotspawn how he believes the Reign’s intense preparation, emotional play, and mechanical skill will lead them to the match of a lifetime.

Hotspawn: Many analysts thought that the Atlanta Reign would struggle against the San Francisco Shock, but you defeated the three-time Stage Finalists.

Erster: It was really fun, I heard rumors that it was the Shock over everyone else, and then I was playing against them and it was even. It was fun.

Your Doomfist has been a standout on the Shock, but you have shown mastery of a variety of heroes this season. How do you keep at such a high level for so many heroes?

I think it’s because I watch a lot of other Overwatch pro’s streams. From those streams, I take the good things that they use and basically merge that into my skill set, it makes me into a better player overall.

What have been some of the most exciting or stressful moments of Playoffs?

The C9 on Rialto [laughs]! We were screaming, we knew Shock had done it!

The crowd was screaming too! What would it mean to you to perform in front of an even larger crowd if the Reign makes it to Grand Finals in Philadelphia?

I mean, it has tens of thousands of people, right? And I think playing in front of such a big crowd is going to touch the bottom of my heart. I’ll have nerves, but it’s going to be an unforgettable memory.

What were your expectations for your match against the New York Excelsior, who you beat twice in the regular season?

NYXL played weird comps and went back and forth through the teleporter, it just so hard for the opponent to deal with. It’s hard to come up with a way to break it.

Is it more difficult to break those more “cheesy” compositions than playing a mirror match?

For mirror matchups, a lot of it has to do with comboing abilities and being mechanically skilled. We can outplay the other team in a mirror if we’re mechanically better. But when it comes to cheesy comps, we have to use our brains and then outplay them as well. So playing against cheesy comps is harder.

With the matches now going until a team reaches 4 map wins, how difficult is it to stay focused for that long, especially in competitive series like yours against the Shock?

So when we were losing against the Shock, people would just fall silent, almost as if we were taking a break during the map. And then the next map we would just show up and pop off, so everyone would be super loud. The next, we start losing, we’re just taking a rest, and then the next map we pop off again [laughs]. So it was kind of weird against the Shock!

It sounds like you’re more of an emotional team, is that an advantage for you in these high-stakes matches?

I think it’s good, because if we lose, then basically we just throw that out and we can have a fresh start to the next map because we were botting out the previous map [laughs].

You’ve been so successful throughout Stage 4, how much does momentum play into your confidence in Playoffs?

Because we’ve been on a winning streak, when we lose, the loss will hit me harder than it used to. So I’m trying double, even triple hard to make sure we win.

Tough choice, but we've decided to focus this week of scrims on the Sigma patch. 3 days is just not enough time for proper meta discovery with a new hero – can't risk our postseason hopes on potentially bad comps / strategy.

In Stage 4, your head coach Sephy announced that for the last week of the stage, the Reign would focus on the Sigma patch. How has that extra preparation helped you in playoffs?

During those days, it was valuable time that we could find what was good and not, and even if it was kind of risky, that practice on the Sigma patch was valuable in our match [against Shock].

Do you have something you want to prove as a team or player during Playoffs?

I want to show the world that I am the best Doomfist in the world.