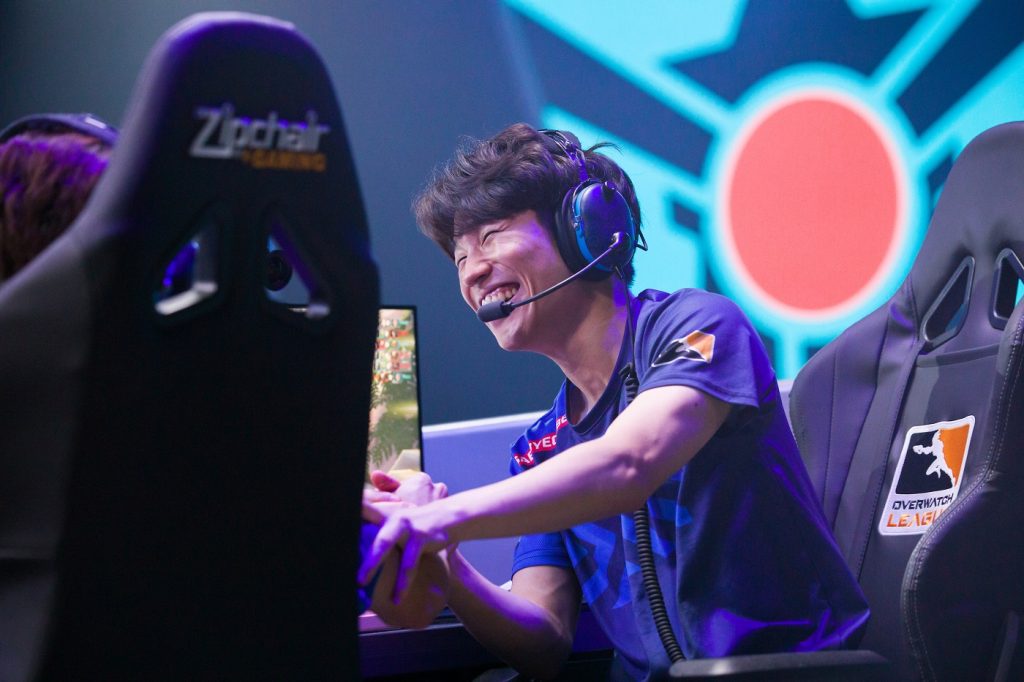 After the London Spitfire’s intense victory over the Shanghai Dragons revealed that rumors of their impressive understanding of the new Sigma meta were founded, many predicted that the New York Excelsior would be the next to fall to the reigning champions. The Overwatch League’s analyst desk was unanimous in predicting an NYXL defeat.

However, New York’s unique compositions, highlighted by team captain Park “Saebyeolbe” Jong-ryeol’s Bastion, McCree, and Reaper, completely overwhelmed London in a 4-1 victory, the most convincing win of the Playoffs yet. Hotspawn spoke with Saebyeolbe after the exciting victory about defying expectations, splitting playtime, and keeping focused during Playoffs.

Although there was doubt that the NYXL could pull off a victory, there was never any question in Saebyeolbe’s mind that his team would come out on top. “For me personally, I’ve never lost to London before, so I knew I was going to win. I don’t really care [about predictions], it doesn’t matter what they say. As long as we focus on what we’re supposed to do, we can beat anybody.”

With many teams focusing on a Pharah-Doomfist or Reaper-Doomfist composition, Saebyeolbe’s more frequent Bastion play challenged London, especially on Numbani where the NYXL were able to solidify a 2-0 lead. The captain’s joy was obvious at the arena, with him laughing and smiling throughout the set.

Saebyeolbe smiles again when asked about Bastion. “I just try to enjoy the game as much as I can, and by enjoying the game, I focus better as well… You can pretty much let go of your keyboard, you just have to control your mouse!” he laughs.

However, Saebyeolbe hints that the Bastion-Symmetra composition is not the only trick NYXL have up their sleeves. “That’s a secret, but what we can say is that we have a lot more strategies ready so fans can expect to see more exciting things. The Bastion and Symmetra strategies require a lot of preparation and details. So it takes a lot of time, but since we had a lot more time than the other teams in play-ins, we were able to prepare those strategies. We definitely learned a lot from watching play-ins and scrimming.”

This season provided many challenges for Saebyeolbe, sharing with the Overwatch League that he felt empty inside when not being able to play his signature heroes during the dominant GOATS meta. With the introduction of a new meta in playoffs where DPS have been able to shine on a multitude of heroes, the New York Excelsior have the difficult task of selecting two starters out of Saebyeolbe, Fl0w3R, Pine, Libero, and Nenne.

“All of our DPS players work really hard,” Saebyeolbe explains. “So whoever is playing is based on a strategy, whoever gets to play a map will focus on how to play his best on that map. People who are not playing will watch and give feedback to the player [on stage]. Even though someone may not be playing, it doesn’t mean he’s not helping the team.”

“He’s actually trying his best to give feedback, everyone is trying their hardest. Plus, by communicating, you get better teamwork. After that, coaches are very important as well, but the biggest factor [when I’m trying to improve] is my teammates.”

New York have taken the first step towards reaching the Grand Finals in Philadelphia, with the Atlanta Reign standing between them and the Winners’ Bracket Finals. Saebyeolbe, having been spoken to directly before the Reign upset the Shock, was excited to match up against San Francisco.

“I’m looking forward to playing against the Shock, I think they’re really good and expect them to beat Atlanta and advance.” With San Francisco dropping down to the Losers’ Bracket, the only chance of this wish coming true is if the Excelsior and Shock meet in the Grand Finals.

Regardless of his opponent, Saebyeolbe’s single goal remains constant: winning the Season Playoffs.

“If I win the championship, it will be my third career championship – IEM, Overwatch World Cup, and then Overwatch League. This year, I made a comeback after not playing for a while. So winning a championship would mean a lot, even more to me.”

Saebyeolbe and the New York Excelsior will face off against the Atlanta Reign this Sunday, September 8th, at 3:00 p.m. PST.