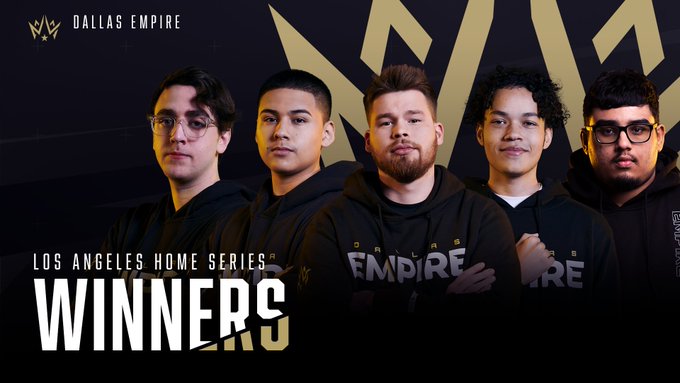 Although two LA teams were hosting, Dallas came out on top of the CDL weekend. (Photo courtesy CDL)

The Call of Duty League Los Angeles Home Series was hosted by Optic Gaming LA and the Los Angeles Guerrillas over the weekend. Atlanta entered the weekend trying to win their second home series in a row and had solid performances throughout the weekend. Dallas suffered a tough 3-0 loss from Atlanta to start off the weekend but refocused and were able to win their first home series. Other teams such as New York continued to struggle and were unable to win a single match, while Minnesota were able to pull of incredible victories over against proven champions.

Los Angeles proved themselves as a dominate home team by beating the Guerrillas and Minnesota but were eventually taken out by Dallas. Dallas is now in third place behind Chicago and Atlanta finally performed at the level fans expected since the beginning of the season.

Minnesota and Seattle faced off in a “Battle of the North” CDL matchup. Minnesota won a Hardpoint Hackney Yard match, but Seattle managed to only lose by 15 points, effectively cutting off rotations and held sites but ultimately fell short.

Seattle was able to turn things around in St. Petrograd Search and Destroy and won the second match 6-5. Slacked traded Apathy’s death and secured one more kill to finish the round 11 in an impressive fashion.

Search and Destroy on St. Petrograd goes the distance, and @SeattleSurge win the map!

The two hometown teams faced off in the second match up of group A. The match was the first time the Guerrillas’ new starting lineup appeared on the mainstage but was unfortunately not enough to compete with Optic Gaming.

OpTic Gaming took the Search and Destroy match to round 11 but couldn’t secure the final round. They were not ready to be swept in front of their home crowd and came back strong in Domination Hackney Yard. Slasher led the charge with several double kills that helped OpTic achieve a 186-132 victory.

Hardpoint Gun Runner saw OpTic dominate the Guerrillas with a 250-186 win which took the series to map five. Los Angeles Guerrillas could not refocus and were reverse swept by the hometown rivals. Vivid did have a strong performance in the last match and the new lineup for the Guerrillas seemed to be an improvement. They were eventually eliminated by Seattle in 3-0 sweep however, which means the team still needs some adjustments to compete against the stronger teams in the league.

Minnesota and OpTic fought for their spot in the semifinals which saw a surprising sweep for the hometown team. Optic achieved a 250-208 victory on Hardpoint Azhir Cave and won 6-3 on Search and Destroy Rammaza. Slasher was able to pull off a 2v1 clutch that helped keep the momentum in LA’s favor.

Optic finished the series off with a 174-142 victory on Rammaza and sent Minnesota to the loser’s bracket against Seattle. Minnesota was not ready to go home and made their way out of the loser bracket with a 3-0 victory against Seattle. GodRx continued to hold points with ease and out slayed Florida to help maintain points and objectives.

Up next we've got SnD on St Petrograd! @ROKKR | #ROKKR pic.twitter.com/vl9biPnd3O

Minnesota would move on to the semifinals

Atlanta and Florida faced off in a one-sided series to start off the CDL weekend. The two teams competed against each other at the Atlanta home series where Florida suffered a 3-0 defeat. Atlanta was not willing to let a single map slip through their fingers and once again dominated Florida.

Florida put up a strong fight in Hardpoint on St. Petrograd and kept the match within 30 points. Atlanta was able to secure key rotations and out slay Florida which maintained their momentum throughout the match. Simp was even able to pull off an execution which was warmly received by the crowd.

Florida started strong on Arklov Peak Search and Destroy but quickly fell apart. After a first-round win for Florida, Atlanta did not drop another round. Priestahh slayed the Florida team who had a tough time taking sites. Atlanta finished off Florida with a 179-128 Domination victory on Gun Runner.

Dallas and New York were up next in Group B and started off with Hardpoint Gun Runner. New York has had a rough CDL season and has constantly tried to turn things around. They started strong with a Hardpoint Gun Runner victory. Attach had an impressive performance and turned on ILLeY to achieve an important kill while holding a hardpoint.

Okay @Attach… we see you… that 360 snap was nasty pic.twitter.com/xNGUjQH5Sm

Dallas was not fazed and refocused on Piccadilly Search and Destroy. IlleY redeemed himself with an impressive shot on Accuracy and a bomb defuse to maintain their lead. Dallas won the map 6-4 and maintained momentum into Domination Hackney Yard. Dallas won the last two matches and sent New York to the Group B elimination round with Florida.

Atlanta and Dallas faced off for a semifinals spot. Atlanta 3-0’d Dallas, but each match was a back and forth struggle. The first map of the series was St. Petrograd Hardpoint which saw both teams going back and forth. Atlanta barely won with a nine-point lead and continued to be one step ahead of Dallas on the second map.

Dallas was sent to the loser’s bracket to face off against Florida who eliminated New York. New York ended the weekend with a 1-6 records and currently sits in last place. They are tied with the Los Angeles Guerrillas and Toronto who all have 10 CDL points.

Dallas was able to quickly 3-0 Florida and move on to face Optic Gaming in the semifinals.

OpTic Gaming continued to put on a show for their home crowd with a solid first map victory against Dallas on Hardpoint Gun Runner. Dallas turned the tide in the second map with a 6-2 victory on Gun Runner Search and Destroy. ILLeY secured an impressive jump snipe that helped maintain the momentum in Dallas’s favor.

After a dominating 6-2 map, @DallasEmpire takes the SnD win and sets the series to 1- 1!

Can @iLLeYYY and the Empire keep up the moment heading it to game 3?

Empire won a very close match of Domination on Hackney Yard and finished the series off with a 250-214 victory on Hardpoint Rammaza.

Minnesota pulled off the biggest upset of the weekend with a 3-2 victory against Atlanta which was their first loss of the 2020 CDL season. They secured a 250-221 victory on Azhir Cave Hardpoint with an impressive performance by GodRx and Alexx.

Simp and Cellium were not ready to drop a second map and both dropped 11 kills on Gun Runner Search and Destroy. Atlanta continued their impressive performance on Domination Hackney Yard with a 180-130 victory, but Minnesota was able to stop them in their tracks.

Minnesota secured a close Rammaza Hardpoint victory with a final score of 250-247 that forced the series to map five. Minnesota previously beat Atlanta 6-2 on Search and Destroy Piccadilly and was able to secure the same outcome in the final map of the series. Minnesota moved on the face Dallas in the grand finals of the event.

Minnesota @ROKKR hand the juggernauts their first ever loss in the Call of Duty League, eliminating them from the LA Home Series! pic.twitter.com/CMRs3g3XfT

The final CDL match of the weekend was an intense five game series. Dallas achieved a 250-181 Hardpoint victory and continued with a strong 6-4 Search and Destroy win. Minnesota was not ready to be swept in the finals and held on with a very tough 158 to 149 Domination win on Gun Runner.

Minnesota continued their comeback with another victory on Hardpoint Hackney Yard. They secured a 250-247 win against Dallas with an intense match up in the final Hardpoint. This took us to the first game five finals in CDL yet.

We have our first #Game5Alert in a CDL final!

Dallas didn’t want a reverse sweep in the Grand Finals and finished the series off with a 6-2 victory in Search and Destroy on Gun Runner. The team finally secured a home series victory and is currently in third place behind Chicago and Atlanta.

The next CDL home series will be hosted by Dallas on March 28th and 29th. Seattle and Paris will start off the weekend followed by a matchup between Florida and Toronto. Chicago will return and face the new powerhouse Minnesota which will give them a chance to prove if they are a dominate team. Dallas will play against Los Angeles Guerrillas in their first match in front of their home crowd.