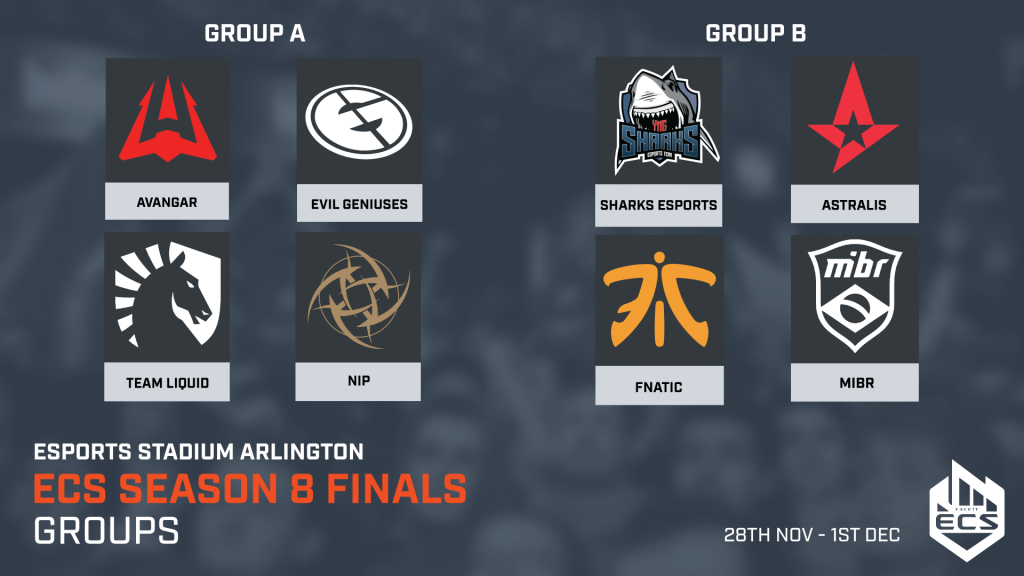 AVANGAR and Sharks Esports Team enter the Finals at No.1 seeds in their groups (Image via ECS)

The ECS Season 8 Finals are just around the corner. The Dallas based event will take place from November 28 to December 1 at Esports Stadium Arlington. The groups and schedule have been confirmed. The ECS Finals’ groups are as follows:

AVANGAR and Sharks Esports Team were the seed one teams as they were the first qualifiers. The rest of the groups were decided via a draft conducted by the two No.1 seeds.

While last season’s champions Team Vitality have not qualified, the top four ranked teams according to the HLTV will be in attendance. Astralis, Evil Geniuses, Fnatic, and Team Liquid will all be reaching for that number one spot on the rankings. In addition, many rising top ten rosters will try to continue to prove themselves such as NiP and AVANGAR.

The schedule is as follows:

The event kicks off with AVANGAR vs EG, NiP vs Liquid, Astralis vs. Sharks, and Fnatic vs MIBR. All of the matches will be at separate times, meaning viewers can watch every moment of action.

The title of ECS Season 8 Champion and an enormous $500,000 prize pool are at stake. All eight teams will be going all out for one of the final big tournaments of 2019. Check back at Hotspawn for more coverage of the Esports Championship Series Finals.