Dendi Unveils B8 Roster and Sponsorship 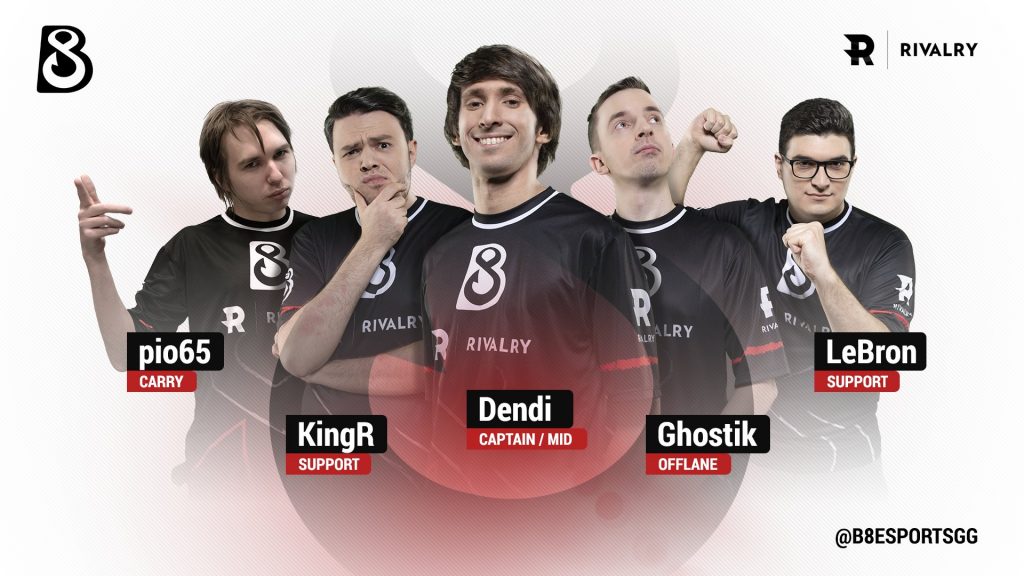 B8, the new organization announced by Danil “Dendi” Ishutin in late January, has revealed it’s starting lineup. The roster was unveiled on the team’s official Twitter page Thursday. Shortly after, B8 also released details of its new sponsorship with esports betting platform Rivalry.

Hello guys! We are ready to announce our Dota2 team roster:

The reveals are the first we’ve heard from The International 2011 champion and his new team since January 27th, when the new organization was first announced. Dendi debuted his org, B8, in a video entitled “The Golden Years” that depicted an elderly version of the Dota star reminiscing about old times. The video concluded with the full reveal of B8’s logo.

Wow, yesterday was quite a day! We haven't even told you a lot yet and you already bombarded us with the wishes of victory and showed how much you believe in us! Thank you very much🖤 pic.twitter.com/nM8X82J7k8

Looking over the newly revealed list of players, there are a few familiar faces, especially for those who follow CIS Dota closely. Dendi tops the list, of course, of this new roster, which blends tried and tested talent with younger up and coming stars.

Next up is Alexandr “pio65” Zalivako, a carry who’s enjoyed stints with Nemiga Gaming, and most recently Gentlemen, during that latter team’s semi-successful stint in minor online tournaments.

The team’s offlaner is set to be Andrey “Ghostik” Kadyk, who formerly played for Team Spirit. He departed that team late last year, but not before amassing some good Dota Pro Circuit experience at the MDL Chengdu Major.

Rinat “KingR” Abdullin and Nikola “LeBronDota” Popović round out the team as the two supports. Both have played top-level Dota for years, and have an impressive list of CIS teams on their resume, including names like Natus Vincere and Gambit Esports. Lebron also shared a roster with Dendi once before during his 2018 stint with Na’Vi.

On top of four new faces, B8 has added a vital sponsor in the form of esports betting site Rivalry. The team unveiled the sponsorship with another video posted to their Twitter account.

The announcement of the roster and sponsorship comes just one day before the start of the ESL One Los Angeles 2020 CIS Open Qualifier, which would be B8’s only chance to compete in the upcoming Major or Minor. At the time of writing, B8 has not announced their plans for attending DPC events.