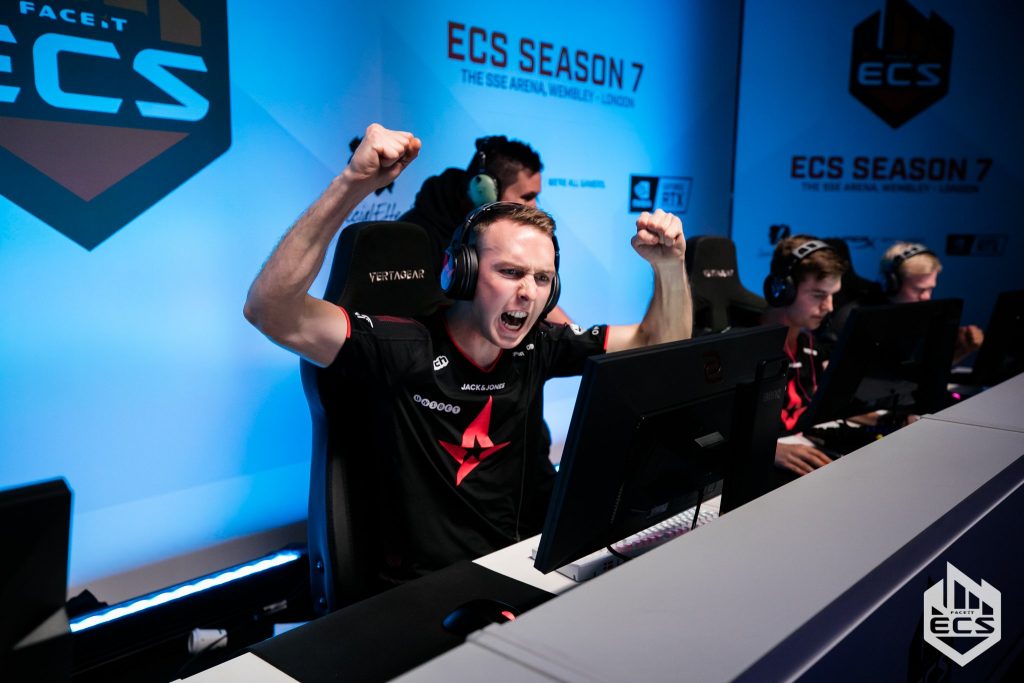 Astralis took home a win in week 4 of the ECS. (Image via ECS)

Week four of the Esports Championship Series has concluded. Two more teams have taken home the US$12,500 first-place prize and earned their spot at the ECS finals in late November. Some big dogs returned for this weeks’ bracket, but their fights weren’t as easy as expected.

Astralis’ first match against last week’s runners-up in M1X turned out very even. On M1X’s pick of Dust II, the teams would go to overtime after two 8-7 halves in favor of T side. A hard-fought map one ended in Astralis’s favor after 36 rounds, 19-17.

Astralis chose to go to Inferno for their map and had a much easier time. A 10-5 start from T side set them up for success, assisted by a glorious Desert Eagle 1v3 from Nicolai “dev1ce” Reedtz.

The Danish squad would close out with a 16-8 scoreline, taking a 2-0 and advancing to semifinals.

Their next test would be the recently revamped FaZe Clan. Astralis’ tried-and-true Nuke pick worked wonders, netting them a 13-2 first half. They took the map with three spread out rounds on T side, 16-9.

For FaZe’s map, they tried to use the weakness exposed by M1X and chose Dust II. However, Astralis had fixed problems they had on it. They dominated the first half, earning a 12-3 from T side. After winning the map 16-8, Astralis booked their ticket to the finals.

There, they met Berlin International Gaming (BIG). After paying the Vertigo tax in bans, they ended up on Nuke. Astralis steamrolled BIG with a 12-3 T side, then didn’t drop a round on CT. A 16-3 first map implied Astralis would make quick work of this finals, but BIG had a plan.

Using the tape from Astralis versus FaZe, BIG chose Dust II to counter Astralis. After a 7-8 first half, BIG only allowed Astralis to plant the bomb in five of the 12 rounds in the second. They took nine rounds and won their map pick 16-11, forcing a tiebreaker map.

On Train, Astralis took a 9-6 first half, but BIG fought back. After a hot streak of rounds, BIG went up 14-12. However, Astralis refused to let them close out the map and took fours rounds straight to win it 16-14.

It's Friday and we have qualified for the @ECS season finals in Arlington, Texas! 🇺🇸

Astralis needed to win this week to get to ECS finals. They are participating in BLAST Pro Copenhagen next week, and the dates overlap with the final week of ECS qualifiers. While they were just two rounds from not making it to LAN, the best team in the world pulled it off in the end.

Team Liquid’s journey this week began against the fragmented ex-Singularity/Ben’s Anime Team. Looking to make quick work of this match, Liquid took Vertigo after an 11-4 CT start and an undefeated T side. Their own pick of Mirage went similarly, with Liquid putting up a 10-5 CT side and a 6-1 T side.

Liquid’s first real test came against INTZ eSports. The Brazilians chose Mirage and started off well, going up 4-1. However, once Liquid had money, they snowballed into a 9-6 T half. They closed out the map with a safe 16-11 scoreline.

Dust II was Liquid’s pick, but it didn’t start out well. INTZ went up early 7-3 on their CT side. Similar to the last map, Liquid gained back control and brought the game back. After an 8-7 first half, Liquid confidently ended the series with a 16-12 win.

The finals saw Liquid face off against the ECS Week 2 winners ATK. However, Liquid would be missing their in-game leader Nicholas “nitr0” Cannella who was unavailable due to personal reasons. His stand-in was their coach Eric “adreN” Hoag.

The absence of their IGL was definitely felt, especially on their own map of Dust II. Liquid dropped 10 rounds to ATK’s T side in the first half. They managed to bring it back on their own T side, forcing overtime. Liquid couldn’t keep their momentum and ATK took the first map 19-17.

On ATK’s pick of Inferno, Liquid had an average 6-9 T side, but were at a deficit no less. Their ensuing CT side was dominant. Liquid managed to win 10 of 13 rounds in the second half, winning the map 16-12.

The tiebreaker map of Overpass went even throughout the first half, ending 8-7 in ATK’s favor. Liquid put their foot down on their CT side and win 9 rounds to close out the map and series.

Liquid came into this week in a similar situation to Astralis. They are also attending BLAST Pro Copenhagen and this was their last chance to make ECS finals. Despite some unforeseen circumstances, Liquid will be attending the event.

There is only one more week of ECS qualifiers to be played. Two spots remain at the finals in Arlington, Texas. Half of the teams playing at BLAST Pro Copenhagen have already qualified, so the last ECS bracket should be the most star-studded yet. Week 5 kicks off on October 28 on Twitch. Tune in to find out who will be the final qualifiers.CS: